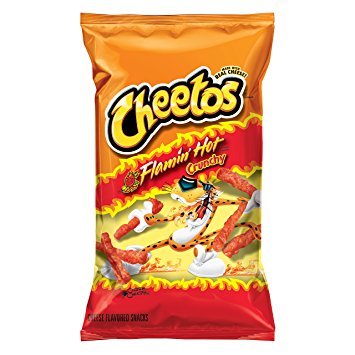 1. Flamin’ Hot Cheetos were invented by a janitor at Frito-Lay who sprinkled chili powder on some regular Cheetos that didn’t get dusted. After his invention, he quickly rose up the ranks to become a PepsiCo executive. His name is Richard Montañez. – Source

2. Cheetos were invented when an animal feed manufacturer in Wisconsin changed up their machine cleaning technique. They placed moist wheat on a grinder and found the grain puffed up when it came out. The company owner then took the end product, seasoned it, and invented the first cheese curl. – Source

3. Children have been sent to the emergency room after eating excessive hot Cheetos consumption and appearing to have bloody poops. Spicy snack contains a lot of red food dye, it can turn the stools of people red or orange. – Source

4. Cheetos are designed specifically to melt in your mouth, tricking your brain into thinking they don’t contain calories, causing you to constantly crave more. – Source

5. Cheeto dust has an official name of “cheetle”. – Source

6. Cheetos annual retail sales total $4 billion. Created in 1948 the inventor did not have the production or distribution capacity to support a nationwide launch which led him to partner with Herman W. Lay and the two eventually merged and formed the Frito-Lay company. – Source

7. There arePepsii-flavored Cheetos in Japan. – Source

8. Frito Lay once opened a Cheeto-themed restaurant. The Spotted Cheetah revolved entirely around Cheetos and had dishes like Cheeto meatballs and cheeto mac n cheese. – Source

9. There are several different types of Cheetos including cheese and bacon, peppers and garlic and shrimp flavor. – Source

10. Cheetos marketed a lip balm that tasted and smelled like the famous cheese dust. – Source 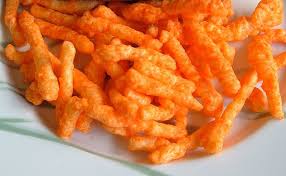 11. It is possible to use Cheetos as a fire lighter due to the high oil content. – Source