1. Texas billionaire and former Presidential candidate Ross Perot wrote a blank cheque to fund and save the 500-year old Treaty Oak in Austin Texas which was poisoned by a vandal. – Source

2. Hugh Hefner’s father, a public accountant, turned him down when he needed money to start Playboy as he did not think the magazine was a good business investment. However, as he was about to leave, his mother took him aside and gave him a $1000 cheque from her savings to help his venture. – Source

4. Francis Crick, co-discoverer of the structure of the DNA molecule and Nobel Prize laureate, sent a letter accompanied by a cheque for 10 guineas to Winston Churchill, saying that the money should be used for the establishment of a brothel at the Cambridge University, instead of a chapel. – Source

5. When Jim Carrey was broke he wrote himself a cheque for $10 million and gave himself 5 years, in those 5 years he went over the $10 million mark because of Dumb & Dumber and The Mask. – Source 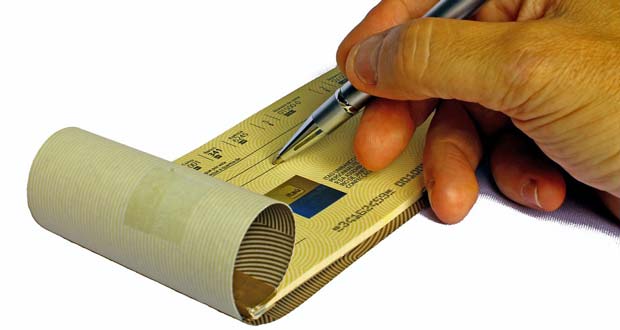 6. An oversized cheque (i.e. Publishers Clearing House sized) can be redeemed for their cash value, but a bank may charge you extra for clearing it. – Source

7. The band Oasis promised a full refund for a show, but after immediately regretting the offer, issued autographed cheques with the band’s logo on it, in the hopes that people would frame them instead of cashing them. – Source

8. Atari’s first world tournament in 1981 didn’t go so well with initial winning cheques bouncing, low participation and contestants having to use their own quarters for games. – Source

9. The signature line on cheques is not a line at all. It’s actually the word ‘signature’ written over and over again. – Source

12. Todd Salimuchai, a man with no citizenship, tried hijacking a plane after being tortured in China for illegally immigrating to cash a $800k drug money cheque. – Source

13. Bill Murray wrote Wes Anderson a blank cheque so that he wouldn’t have to cut a scene from Rushmore. – Source

14. There’s such a thing as a left-handed cheque book. – Source

15. In Canada, a common way to pay your monthly rent is to give your new landlord 12 cheques, dated for the first day of the next 12 months. – Source

16. All Palestinian families who had a member killed by Israeli troops after the outbreak of the Second Intifada received a $10,000 cheque from Iraq’s then-president Saddam Hussein. – Source

17. Canadian cheques can legally be written in English, French or Inuit. – Source

18. The US government sends a cheque to Cuba every year for USD$4000 to lease Guantanamo Bay and the Cuban government ignores them as they don’t consider the deal legitimate. – Source

19. The cheque is spelled check in American English. – Source

20. In 1980, a bet was made on rising commodities prices between Population Bomb author Paul Ehrlich and growth economist Julian Simon. Erlich lost in 1990 and mailed a cheque to Simon for $576.07 without even including a note, still less admit he was wrong. – Source

21. Before Jerry Springer was on TV he was a politician in Cincinnati, who was forced to resign after paying for a prostitute with a cheque. – Source