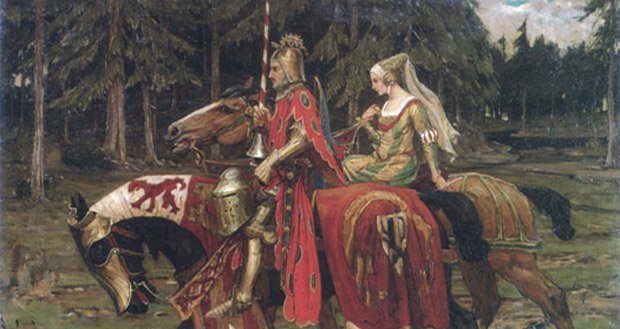 1. On 26th March 1351, 30 knights from England and France fought a melee to decide which nation would inherit the duchy of Brittany. The fight is hailed as a noble display of the ideas of Chivalry. – Source

2. During WW2, a German fighter ace noticed how a US B17 was too damaged to fight back, escorted it back to Britain, risking execution in the process. After the war, both pilots became best friends, whilst this event symbolized one of the greatest acts of chivalry in war. – Source

3. England still has a High Court of Chivalry. It last sat in 1954 after a 200-year break and its first ruling was to decide whether it still existed. – Source

4. The code of Chivalry had nothing to do with women till the 15th century and only then they are mentioned in some versions so that soldiers in the war didn’t kill women, despite being thought of as a ‘source of evil’. – Source

5. Many feminist scholars dismiss chivalry as a type of benevolent sexism because it relies on the assumption that women are weak and in need of protection while men are strong. They argue that chivalry perpetuates gender inequality. – Source

6. The Catholic Church has several orders of chivalry, the Pope can make people Knights. – Source

7. Mark Twain believed certain 18th and 19th-century novels which romanticized ideas of chivalry and of the idealization of the Middle Ages helped shape the Southern character which was ultimately responsible for the Civil War. – Source

8. In Battle of Crecy, English won with 9,000-12,000 against 30,000 because of longbows and cannons which led to the engagement being described as “the beginning of the end of chivalry”. – Source

9. In the late 14th century, knights who read chivalry tales started to reenact them with the Pas d’armes, where knights would pick a spot, and fight anyone who tried to pass. – Source

10. The tradition of carrying the bride across the threshold began in Medieval Europe when many people believed that a bride was extra vulnerable to evil spirits through the soles of her feet. To protect the bride from evil spirits, the chivalric groom carried the bride into their new home. – Source

11. As HMS Birkenhead sank, the soldiers stood silently in rank, while the women and children were loaded into the lifeboats. They remained in rank as the ship slipped under and over 300 died. Their courage and chivalry gave rise to the “women and children first” protocol. – Source

12. The Crusades were seen as a chivalrous enterprise. Ironically, the Muslim leader Saladin (1137/38–1193) achieved a great reputation in Europe as the quintessential chivalrous knight. – Source

13. According to chivalric tradition, a man should walk on the right side of a lady. The custom dates from the Middle Ages when knights wore their sword on the left side, keeping the right side (the fighting arm) free. Men were also encouraged to walk curbside to protect women from splashing carriages and the contents of the chamber pots being thrown into the street. – Source

25 Facts That People Often Get Wrong

July 15, 2017
Latest Posts
Subscribe to Blog via Email
Did you know?
Loading...
Facts of the Day
Registration is disabled.