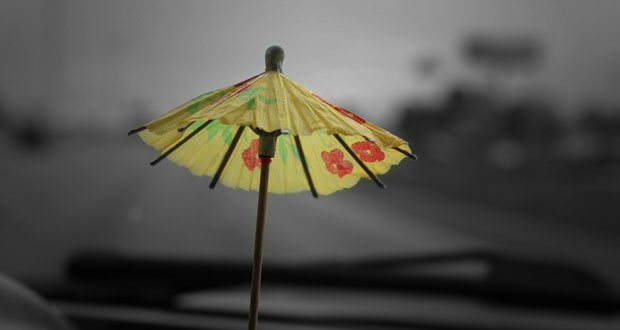 2. There exists a cocktail called a Ramboozle, popular in England in the mid 17th century. – Source

3. There was a real, radium-based, alcoholic drink known as the “Atomic Cocktail” that was served in missile shaped bottles. They had adverse effects after prolonged exposure but could cure minor fevers, headaches, and depression. – Source

4. An attempt to set the Guinness World Record for the world’s most expensive cocktail was thwarted when a customer dropped and broke the bottle of Cognac that was worth $77,000. – Source

5. Ernest Hemingway invented a cocktail named “Absinthe and Champagne” or, “Death in the Afternoon.”- Source

6. There’s an International Bartenders Association which sanctions an official cocktail list for use in the World Cocktail Competition. – Source

7. There is a cocktail known as a “Sully,” named after the pilot of US Airways Flight 1549, which consists of two shots of Grey Goose and a splash of water. – Source

8. There is a bar in Yukon, Canada where you can drink a Sourtoe Cocktail. It has a real severed human toe in it. – Source

12. The word “cocktail” comes from a practice of horse dealers in the 1700s. To cock a horse’s tail and make it look more spirited for the show, the dealer would give it a ginger suppository. Adding spices like ginger or pepper to gin or beer became known as adding “cock-tail”. – Source

14.  A “Rich Dead Nazi” is actually a cocktail made of Goldschläger, Jägermeister, and peppermint schnapps. – Source

15. A gin & tonic cocktail can help to fight malaria and Winston Churchill once said, “the gin and tonic have saved more Englishmen’s lives, and minds, than all the doctors in the Empire.” – Source

16. A bartender in 1861 invented the Black Velvet cocktail (a layer of Guinness atop some sparkling wine) to mourn the death of Queen Victoria’s husband, Prince Albert. The Guinness symbolizes a mourner’s armband. – Source

17. In Utah, bartenders in restaurants have to mix cocktails behind a curtain. – Source

18. The Caesar is a cocktail only popular in Canada. It is a mixture of vodka and Clamato (clam broth + tomato juice). – Source

19. The Brandy Daisy, a cocktail of citrus juice and brandy, was the forerunner of the Margarita. Margarita is the Spanish name for Daisy. – Source

20. The cocktail “screwdriver” origins from Persian Oil Workers in the 1920s. When lacking a spoon to stir, they used screwdrivers. – Source

21. A martini cocktail should be stirred, and a shaken martini is called a Bradford. This is why Bond always has to specify his martini be made the wrong way. – Source

22. During prohibition, honey and fruit juices were heavily used to mask the poor quality of liquor. These cocktails were important due to the speakeasy potentially being raided at any moment. –
Source

23. The “Toronto Cocktail” was first recorded in 1922, at a time when alcohol was illegal in Ontario. – Source

24. Cocktail glasses (tumblers) are thicker on the bottom so non-liquid ingredients can be “muddled” in the glass before liquids are added. – Source

25. The Tom Collins cocktail is named after an 1874 prank in which someone would be led on a wild goose chase from bar to bar by friends, being told a libelous fellow named Tom Collins was besmirching their name. Newspapers bought it too. – Source