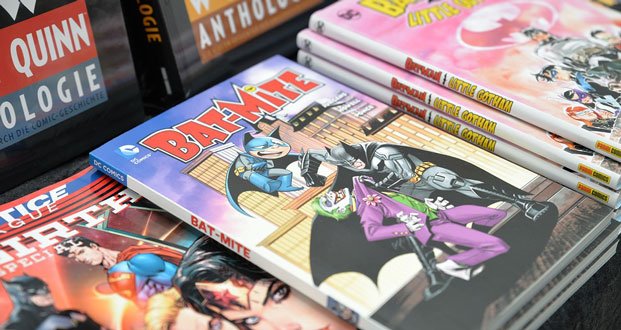 1. Stan Lee planned on quitting the comic book industry until his wife Joan told him to write the type of characters he wanted to for his last project. The result was the Fantastic Four, which created a more humanly flawed type of superhero. – Source

2. When Patrick Stewart first saw an X-Men comic he asked, “What am I doing on the front of a comic book?” – Source

3. John Constantine is one of the only comic book characters to age in real time with his publication. – Source

4. 7 years before the Philosopher’s stone, Neil Gaiman published a comic book about an English boy who finds out he’s a wizard on his 12th birthday and receives an owl from a magical stranger. – Source

5. Marvel published a Generic Comic Book, in order to trademark the names “Super-Hero” and “Super-Villain”. – Source

6. Comic book characters come back to life after death so often that they are aware of the likely resurrections. Professor X said, “In mutant heaven, there are no pearly gates, but instead revolving doors.” After one X-Man died, his daughter refused to mourn him because he’d be alive again. – Source

7. Deadpool has a medium awareness which means he is aware that he is a fictional character in a comic book, and is thought to be due to his mental state. – Source

8. Futurama Comics have been released bi-monthly since 2000, and had and continues to keep the series alive after both of the show’s cancellations. – Source

9. The famous rock opening scene from Raiders of the Lost Ark was lifted from a 1954 Scrooge McDuck comic book. – Source

10. Stanley Lieber used the pseudonym, Stan Lee because he was afraid that associating his legal name with comic books would harm his writing career. – Source

11. The Disney character who has appeared in the most films is Donald Duck. He is also the fifth most published comic book character, behind Superman, Batman, Spider-Man, and Wolverine. – Source

12. After Batman and Robin rescued it from a slaughterhouse, DC comics included a Bat-cow. – Source

13. The Comic book code of 1954 specified that females shall be drawn realistically without exaggeration of any physical qualities. – Source

14. Scooby and the gang star in a comic book, “Scooby Apocalypse” is about trying to survive in a hellish near-future. – Source

15. In a comic Han Solo and Chewbacca crashland on Earth, Han is killed, Chewbacca is mistaken for Bigfoot and Hans remains are found by Indiana Jones 100 years later. – Source

16. In the late 1940’s, comic books were seen as a direct cause of juvenile crime. Children were forced to burn their comics in schoolyards and a Senate hearing was held which led to the Comics Code Authority and later the Canadian ban of all comic books. – Source

18. Comic book distribution is monopolized by one company, Diamond. Marvel, DC, Image, etc. have all had exclusive contracts with them since the 90’s or before. After a federal investigation, Diamond was cleared of violating anti-trust laws since they don’t monopolize all forms of literature. – Source

19. Japanese manga publishers allow fans to create and openly sell their own comics based on popular series, even if the work is pornographic. The publishers view the amateur comics as a form of marketing, not a threat to sales. – Source

21. “Howard The Duck,” one of the most critically panned comic book adaptations of all time, cost more to make than “Return of The Jedi”. – Source

22. The Flash was the first Comic Book Character to be rebooted, meet his alternate universe self, and the first to have the sidekick who inherited the mantle of their mentor. – Source

23. The comic book guy from The Simpsons has a real name, Jeffrey Albertson. – Source

25. In 1983, Marvel Comics actually published a number of comics about a “Spider-Pig” though his name was Peter Porker, your friendly neighborhood Spider-Ham. – Source

25 Uplifting Headlines of the Week - Part 59

December 11, 2017
Latest Posts
Subscribe to Blog via Email
Did you know?
Loading...
Facts of the Day
Registration is disabled.