21. Deer jump high into the air as a signal to predators that the jumper isn’t worth hunting. – Source

22. In England it is permitted to shoot deer from an aircraft, as long as the vehicle is not moving or the engine is switched off. – Source

23. When male deer have damage to their testicles or have them removed their antlers stop shedding. The velvet continues to grow around the existing antler giving them a cactus look, and are as light and dense as balsa wood. – Source

24. New Jersey has more white-tailed deer per square mile than anywhere else in North America. – Source

25. The UK has a growing population of wild, fanged tropical barking deer originally from China. – Source 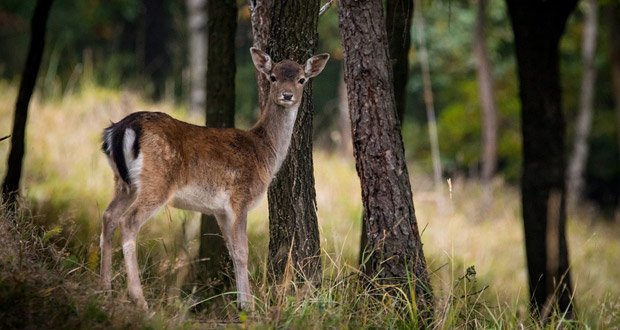 26. Trees can tell if deer are trying to eat them. Due to their ability to detect deer saliva, trees defend themselves by producing excess acids that cause their buds to taste bitter so that the deer will lose interest and leave them alone. – Source

27. On Japanese island Yakushima, macaque monkeys are known to ride deer for transportation, and in return, they groom deer and share food with them. – Source

28. British Columbia woodsman Francis Wharton shot a deer in the late 1960s but had no serviceable teeth with which to eat it so he fashioned dentures out of the deer’s own teeth and ate it. – Source

29. There is an “artform” called Assquatch, faces made from deer butts. – Source

30. The reason hunting jackets are neon orange is cause deer can’t see that color. – Source