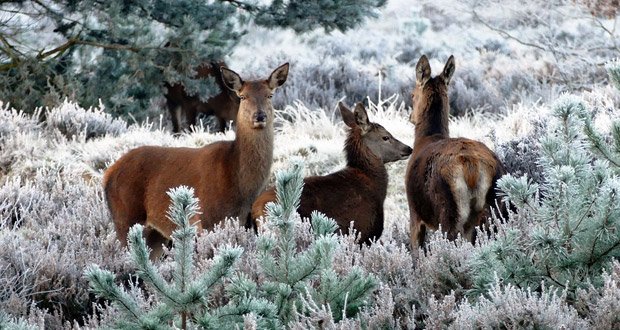 1. A herd of rare white deer lives within the confines of the former Seneca Army Depot. When the base was open, the deer were inadvertently fenced off and subject to a genetic bottleneck. With the depot now closed, the deer have an uncertain future. – Source

2. There is a species of deer with fangs. – Source

3. Reindeer herders in Finland are painting their reindeer’s antlers with reflective paint to cut down on deer-car collisions. – Source

4. The distress calls of baby mammals share elements across species: a study in the Canadian prairies showed that mother deer rushed towards recorded cries not only of infant deer, but also those of fur seals, dogs, cats, and humans. – Source

5. Wildlife researchers around the world have caught deer on film eating birds, in some cases “actually eating living baby birds right out of the nests”. – Source

6. Key deer is an endangered deer that lives only in the Florida Keys. Key deer easily swim between islands and because of their proximity have lost their fear to humans. It is the smallest North American deer. – Source

7. There is a species of deer in Germany who won’t cross the border where the Iron Curtain once stood, even though that border has been gone physically for 20 years. – Source

8. Deer poses the most danger to humans out of all mammals living in North America. – Source

9. If you hit a deer with your car in South Carolina, you can receive a tax credit if you get the deer butchered and donate the meat to charity. – Source

10. There is a rare fiber called Cervelt that is produced by New Zealand red deer and is softer than cashmere. Only 20 grams of this fiber can be collected yearly per deer and it is used to make luxury socks that cost $1,500 a pair. – Source

11. In Nara prefecture, Japan, deers and people lived in harmony for 1300 years. You can see deers all over the city. They are called “bowing deers” because they bow to people to get food. – Source

12. Canadians rescue deer trapped on frozen lakes, by blowing them to the shore with helicopter downdraft. – Source

13. Dollar bills are referred to as ‘bucks’ because in the 18th/19th-century deerskin or whole deer were used for currency. – Source

14. Deer is so common in other parts of the world (in numerous species), are almost non-existent in wildlife-rich Africa. – Source

15. Deer antlers are the fastest growing tissue on earth and are capable of expanding an inch every two days during their velvet stage. – Source

16. The world’s smallest type of deer, the Pudu, is only 32 cm tall. So basically as tall as a ruler. – Source

17. If a pregnant deer becomes malnourished and conditions aren’t good and the food is short, they can potentially abort and absorb the fetus naturally. – Source

18. The Irish Elk was the largest deer which ever lived. They would often grow to 7ft at the shoulders and they had the largest antlers of any known deer at 12ft from tip to tip. – Source

19. Deer tend to align themselves north and south with Earth’s magnetic field when relaxing. – Source

June 15, 2017
Latest Posts
Subscribe to Blog via Email
Did you know?
Loading...
Facts of the Day
Registration is disabled.