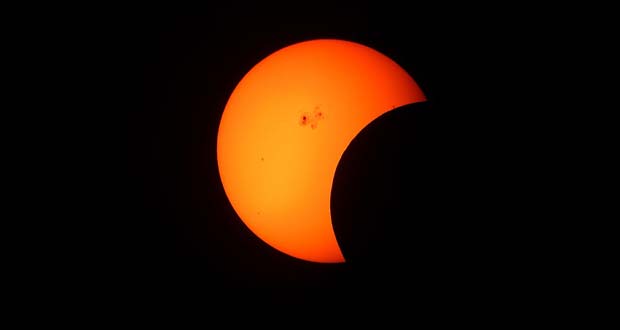 2. On August 21, 2017, a total solar eclipse will be visible across the United States. The last total solar eclipse visible from the U.S. mainland happened on February 26, 1979, but this one is different. The eclipse’s ‘path of totality’ is completely within U.S. soil for the first time since 1776. – Source

3. Concorde pilots chased a solar eclipse at Mach 2. They extended it from 7 minutes to 74. – Source

4. “Christopher Columbus, in an effort to induce the natives of Jamaica to continue provisioning him and his hungry men, successfully intimidated the natives by correctly predicting a lunar eclipse.” – Source

5. It is by pure coincidence that we exist on a planet and in a time when our star is covered exactly during a total eclipse. No other known planet has total eclipses and at some point, in the future, they won’t occur on Earth either. – Source

6. Helium is named after the Greek god Helios because the first evidence of its existence was found not on Earth but in the Sun during a solar eclipse in 1868. It was not formally identified on Earth until 1895. – Source

7. Solar eclipses are more dangerous to view directly than the Sun itself because the eye dilates from the dark eclipse which allows remaining sunshine to cause more damage to the eye. – Source

8. The Sun will never set on the present-day British Empire, due to the smallest and most isolated of the 14 territories, the Pitcairn Islands, which only has a population of a few dozen people. Until there is an eclipse there, Britain remains the empire on which the Sun never sets. – Source

9. An American group from Harvard set out to observe the solar eclipse of Oct 27, 1780, with the Revolutionary War in full swing. Though the Brits granted them safe passage (sought in the name of science) into what was enemy territory, they still failed to witness totality due to miscalculations. – Source

10. If you were on the Moon during a total lunar eclipse, you would simultaneously see every sunset and sunrise on the Earth as a red ring around the globe. – Source

11. An ancient and complicated mechanism from 80 BC that could predict solar and lunar eclipses was found aboard a sunken Greek ship and still puzzles researchers on some of its functions. – Source

12. The ancient Babylonians worked out that there are solar eclipses that occur 18 years, 11 days, and 8 hours apart. This period, 223 lunar cycles, is called the Saros cycle. The 1999 eclipse and this year’s eclipse are Saros cycle solar eclipses. – Source

13. Some people from India still believe you should wash your eyes out with the first urine of the day on the day of a solar eclipse to avoid eye pain. – Source

14. A total solar eclipse in 1925 had a path of totality that just grazed Manhattan. It was reported that residents below 96th St. could still see part of the Sun, while those above 96th were in total darkness. – Source

15. The first approximation for the speed of light was made in 1671 when the eclipse of Io on Jupiter happened 17 minutes later than expected. – Source

16. In 585 BC a solar eclipse occurred in the middle of a battle between the Lydians and the Medes. They promptly ceased fighting and signed a peace treaty. – Source

17. All eclipse calculations are by Fred Espenak, and he assumes full responsibility for their accuracy. – Source

18. Some Native Americans will not set foot outside during the eclipse but will instead, by tradition, fast and pray the entire day. – Source

20. Right before and after totality in a solar eclipse, you can see undulating ‘shadow bands’ on plain-colored surfaces that look like writhing snakes, and scientists do not fully understand the phenomenon. – Source

August 18, 2017
Latest Posts
Subscribe to Blog via Email
Did you know?
Loading...
Facts of the Day
Registration is disabled.