1. In WWII, weather reports were censored to prevent enemy submarines from learning about conditions. A football game in Chicago was so covered in fog that the radio announcer couldn’t see the field, but afterward he was officially thanked for never using the word “fog” or mentioning the weather. – Source

2. A soccer/football game in the UK was canceled shortly after it began due to heavy fog, everyone left except goalkeeper Sam Bartram who didn’t hear the referee and guarded his goal in silence for 15 minutes before a policeman came and told him of the cancellation. – Source

3. A “London Fog” was yellow smog so thick you couldn’t see the ground. These “pea soupers” often carried toxic chemicals and one in 1952 killed 4,000 people in five days. Due to the Clean Air Act, the last London Fog was in 1962. – Source

4. An elevator operator Betty Oliver survived a 75-story fall from the Empire State Building in 1945 when a B-25 crashed into it due to fog. 3 crewman and 11 people in the building died. Betty, who died in 1999, still holds the Guinness World Record for longest survived elevator fall. – Source 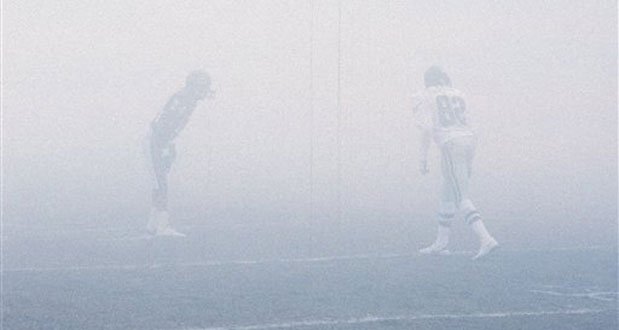 6. The Fog Bowl, an NFL game in 1988 between the Philadelphia Eagles and Chicago Bears had a fog rollover so dense that the fans couldn’t see the players and the refs had to call what happened after every play because the players couldn’t even see the sidelines. – Source

7. In 1950, “One of the largest human experiments in history” was conducted on unsuspecting residents of San Francisco by the US military in a germ-warfare simulation and Nuremberg Code violation that utilized the Bay Area’s iconic fog to help spread two kinds of bacteria over the city. – Source

8. The Brocken Spectre is an atmospheric condition in which the sun casts a person’s shadow onto fog or clouds, making the shadow appear enormous, otherworldly, and ringed with a rainbow halo. – Source

9. The Giant Redwood Tree is so tall that in order to get water near the top of the tree, it uses “air roots” to collect water out of the fog. – Source

10. Due to rapidly descending and dense fog in California there was a 198 car pile up that stretched longer than a mile. While 41 people were injured, absolutely none were killed. Response teams and civilians alike recall the sounds of cars continually crashing for about 15 minutes. – Source 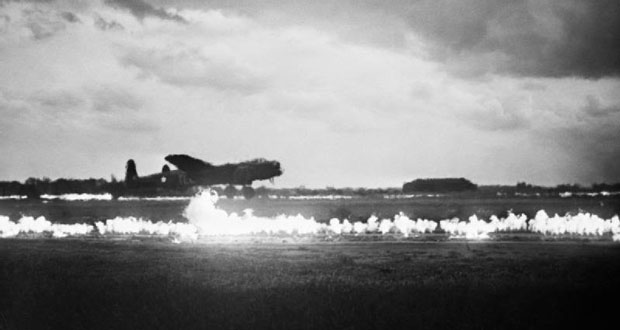 11. During WWII Britain needed a way to clear the fog from its airfields, they developed the FIDO system which pumped petrol down the edges of a runway and burned it to evaporate the fog. A system used over 450,000 liters of fuel per hour and the glow from the flames could be seen from 100km away. – Source

12. The Tenerife disaster is the deadliest accident in aviation history with over 500 deaths in which two 747 jets collided on the runway due to vague communications, radio interference and heavy fog. – Source

13. There is a way of catching fog to turn into running water. – Source

15. Desert beetle elevates its back to collect fog water and channel it into its mouth. – Source

16. The Garûa Fog near the coast of Chile and Peru is so clear that it poses no problem to visibility but so wet that drivers have to use their windshield wipers. – Source

17. There is a vodka that is made from San Fransisco fog. – Source

18. Freezing fog is commonly referred to a pogonip in the Western US. – Source