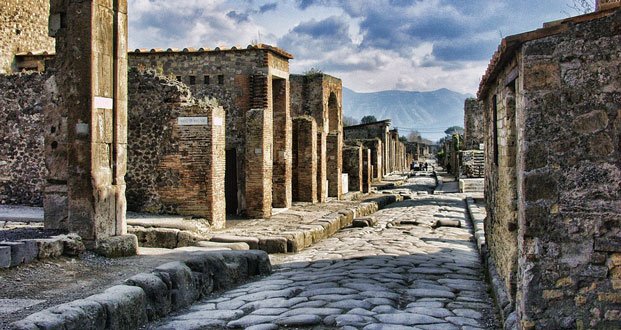 1. After uncovering the ruins of Pompeii, researchers discovered ancient graffiti including phrases such as: “Weep, you girls. My penis has given you up. Now it penetrates men’s behinds. Goodbye, wondrous femininity!” – Source

2. A German graffiti artist painted a 250 square meter bridge to make it look like it was made out of Lego. – Source

3. Some Viking runes are simply graffiti, translated as “Ingigerth is the most beautiful of all women” or “Tholfir Kolbeinsson carved these runes high up.” – Source

4. The Romans left graffiti carved in the pyramids like, “I didn’t like anything but the sarcophagus,” and, “I can’t read the hieroglyphs.” – Source

5. In 1992, a youth group descended into a French cave with steel brushes to remove graffiti and ended up partially removing 15,000-year-old bison cave paintings. – Source

6. The Holocaust Memorial in Berlin contains an anti-graffiti chemical which turned out to be manufactured by the same company that made the Zyklon B gas used in concentration camp gas chambers during WWII. – Source

7. In WWII an American popular culture trend resulted in people graffitiing “Kilroy was here” across Europe, which convinced Hitler that Kilroy was a spy and Stalin even investigated trying to find out who Kilroy was. – Source

8. The water-repellent properties of NeverWet spray can be used to create invisible ink street graffiti that only shows up in the rain. – Source

9. The oldest known depiction of Jesus is graffiti of a man venerating a crucified man with the head of a donkey, accompanied by the caption “Alexamenos worships his god”. – Source

10. Banksy’s New Orleans work is under attack by an anti-graffiti vigilante known only as ‘The Gray Ghost’. – Source

11. Early Renaissance artists were electrified when a young Roman fell through a cleft in a hill and rediscovered Nero’s Golden House. Subsequent tourists to the spot include Michelangelo, Raphael, Casanova, and the Marquis de Sade, all of whom left graffiti in the ruins. – Source

14. It was a tradition to cover an aircraft with graffiti when it landed on the wrong carrier before sending it back to the right one. – Source

15. In 2005, Facebook hired graffiti artist David Choe to paint murals in their new office space. Choe accepted Facebook shares instead of a small cash payment of several thousand dollars, and when Facebook went public in 2012, his payment for the murals ballooned into a 200 million dollar payoff. – Source 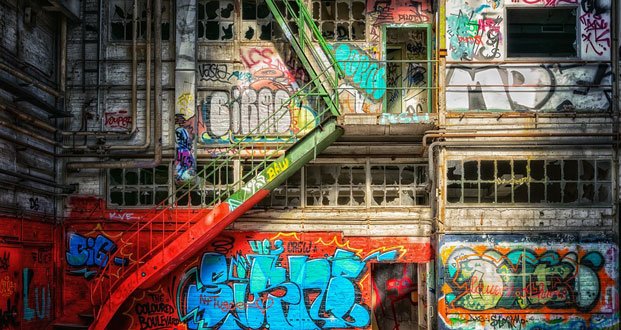 16. The word graffiti is actually the plural of graffito. – Source

17. To promote his newest single, Paul McCartney painted “Hey Jude” on the window of a closed boutique store. A Jewish passerby mistook this as anti-Semitic graffiti (“Jude” meaning “Jew” in German) and smashed the window. – Source

18. The largest graffiti tag in the world consists of a single line of paint dripped over 8 miles in Manhattan to spell out the artist’s name (Momo). – Source

19. The Reichstag, the seat of Germany’s government, has Russian graffiti leftover from WWII, including one that says “I f*ck Hitler in the Ass.” – Source

20. Thierry Noir was a college dropout who, in 1984 using graffiti, pioneered the trend of painting the Berlin Wall as a form of protest. Climbing through small holes and avoiding gunfire, Noir was able to paint 5 km of both the West and the East sides of the Wall.  –Source

21. There are ancient Viking graffiti on The Hagia Sophia’s Marble Parapets. They may have been engraved by members of the Varangian Guard in Constantinople in the Viking Age. – Source

22. There is a type of graffiti that involves knitting. – Source

23. The Valley of the Kings in Egypt was a popular tourist destination in ancient times. There are over 2100 instances of graffiti done by ancient tourist from as far back as 278 B. C. in languages such as Greek, Latin, Phoenician, Cypriot, Lycian, and Coptic. – Source

24. A study in the Netherlands once showed that the presence of graffiti doubles the number of people littering and stealing in a neighborhood. – Source

25. The White Rose was a non-violent, intellectual resistance group in Nazi Germany that propagated anonymous graffiti and whose key members were beheaded after being caught. – Source