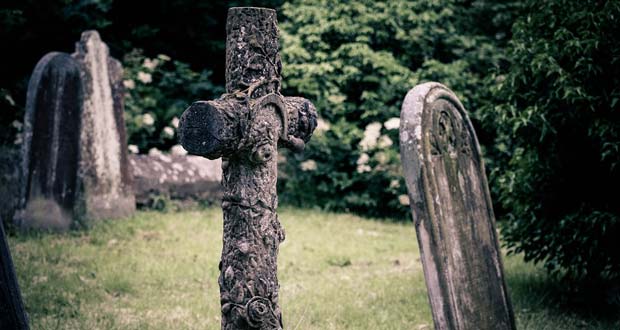 2. Ben & Jerry’s has a “flavor graveyard” where there are tombstones for earlier flavors that are no longer sold. – Source

3. New York’s Washington Square Park used to be a graveyard, and it is believed over 20,000 there are still buried there. – Source

4. Everest has what is called the “Graveyard in the Clouds” which is from hikers dying that haven’t been found or are unable to be recovered, but from time to time their bodies reappear after a glacier move or avalanche. – Source

5. Ant colonies and beehives have graveyards and special “undertaker” ants/bees to collect the dead. – Source

7.There is an old Soviet Pilots graveyard with old aircraft tail fins outside of a now NATO base in the Baltic States, where NATO aircraft currently fly Air Policing missions against Russian Aircraft. – Source

8. During the 1800’s in Holland, the graves of Protestants and Catholics were placed in separate graveyards. However, a couple found a way to still be near one another, even if their beliefs differed. – Source

9. Arlington national cemetery began where Robert E. Lee lived prior to the civil war. The Union occupied his estate and to keep Lee from wanting to return turned it into a graveyard. – Source

11. In the 1850s London closed its graveyards and Parliament decided a new company would transport all of the dead out of the city on a dedicated railway. – Source

12. There is an abandoned “graveyard” of extremely large sculptures of 43 U.S. Presidents. – Source

13. The graveyard of St Peter’s Church in Liverpool, where John Lennon and Paul McCartney first met, contains the gravestone of an individual named Eleanor Rigby. – Source

14. Leakin Park is called as a large unregistered graveyard. Approximately 67 bodies have so far been found in the area. – Source

15. In Nouadhibou, Mauritania there is the largest ship graveyard in the world. – Source

17. There is a phallic and female-breast graveyard. – Source

18. Conservationists found the bones of at least 15 people in the basement of a house belonging to Ben Franklin, most likely bodies smuggled from graveyards for an illegal anatomy school. – Source

19. Wales has a ‘The Underwater Graveyards’ along with a school, a post office and other flooded structures and farmlands. – Source