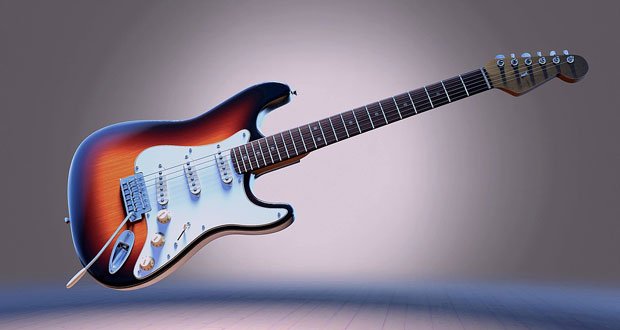 1. In 1949, BB King re-entered a burning music hall to save his favorite $30 Gibson guitar. King later learned the fire was started when two men knocked over a burning barrel of kerosene while fighting over a woman named Lucille. King has named every guitar he’s owned Lucille as a reminder. – Source

2. On Christmas Eve in 1969, Willie Nelson got a phone call that his house outside Nashville TN caught on fire. Willie came home and rush into the fire. He managed to save his guitar trigger and one pound of weed. – Source

3. Brian May’s dad helped him build his famous guitar but was upset when Brian abandoned his Ph.D. program to join Queen. Brian went on to write “We Will Rock You”, “Fat Bottomed Girls” and eventually “A Survey of Radial Velocities in the Zodiacal Dust Cloud”, the thesis he finished 36 years later. – Source

4. The guitar, Slash plays on November Rain is a 59 Les Paul that Aerosmith’s Joe Perry used in the 1970s before selling it. Perry wanted it back but lost track of it until a friend saw it in a magazine article about Slash. Slash didn’t want to sell but gave it to Perry for his 50th birthday. – Source

5. George Clinton doesn’t know who played guitar for one of Funkadelic’s greatest guitar solos, “Get Off Your Ass and Jam” (1975). The mystery guitarist was a white heroin addict that asked to sit in and was paid $50. – Source

6. After a tornado in 1998, 1000+ trees were toppled at The Hermitage, a plantation built by President Andrew Jackson. Using wood from the fallen trees, the Gibson GuitarCorporation produced 200 limited edition “Old Hickory” guitars. – Source

8. Guitarist Les Paul’s right elbow was shattered in a car accident. Doctors were unable to repair it so he had them fuse his arm bones at a 90-degree angle so he could continue to play guitar. – Source

9. A man planted 7,000 trees to make a guitar-shaped forest as a tribute to his late wife. – Source

11. Leo Fender, the inventor of Fender Guitars never knew how to play the guitar. – Source

13. In 2006, the RIAA successfully took down a community-generated collection of 34,000 guitar transcriptions that had been compiled over 14 years. – Source

14. The song American Woman was made by accident. While playing at a show in Ontario, Randy Bachman broke a guitar string. While tuning his guitar he came up with a great riff, he implored Burton Cummings to sing something, the first words out of his mouth were, “American woman, stay away from me.” – Source

16. After Beethoven heard Mauro Giuliani play the guitar, he commented that the instrument was “a miniature orchestra in itself”. – Source

17. Scientists at Cornell University made a functioning “nano guitar” that is about the size of a human blood cell. – Source

18. Jerry Garcia played a custom built guitar named “Lightning Bolt” which was made from the recycled rosewood of a bed from an Asian opium den. – Source

19. The popular steel slide guitar sound of Hawaii was taught to them by visiting cowboys from a small town in California. – Source

20. Volkswagen had a promotion where every car came with a limited edition electric guitar that could plug into the car as an amp. – Source

21. Musician Dave Carroll wrote a song about his experience of how his guitar was broken during a trip on United Airlines. It caused a 10% fall in stock price. – Source

22. Bob Dylan’s guitar from the controversial 1965 concert where he “went electric” was missing for almost 50 years. After it was found and authenticated, it sold at auction in 2013 for a record-setting $965,000. – Source

23. Hard Rock Cafe’s tradition of displaying rock ‘n roll memorabilia was first started by Eric Clapton, who gave a guitar to the original restaurant in London to hang over his regular seat. – Source

24. Ryo Kawasaki is a Japanese jazz guitarist and quantum physicist who is credited with inventing the first guitar synthesizer with Roland and Korg, creating four synthesizer programs for the Commodore 64, as well as developing and popularizing the fusion music genre. – Source

25. Anthony Kiedis of the Red Hot Chili Peppers once traded a guitar signed by the Rolling Stones for $10 worth of heroin. – Source

26. The acoustic bass guitar was invented two decades after the electric bass was introduced. – Source

27. John Lennon always had his fourth guitar chord slightly out of tune. He explained that it was to be able to recognize his parts when listening to the Beatles on the radio, in the beginning, and he just never stopped. – Source

28. Guitar distortion in Marty Robbins 1961 song “Don’t Worry” was due to an electrical fault in the guitarist’s amp. Other musicians sought to recreate this “fuzz” sound leading to the first purpose-designed commercial distortion circuit being released in 1962.  – Source

October 13, 2018
Latest Posts
Subscribe to Blog via Email
Did you know?
Loading...
Facts of the Day
Registration is disabled.