Here is part 4 of Harry Potter BackStory series from Pottermore by J.K. Rowling. 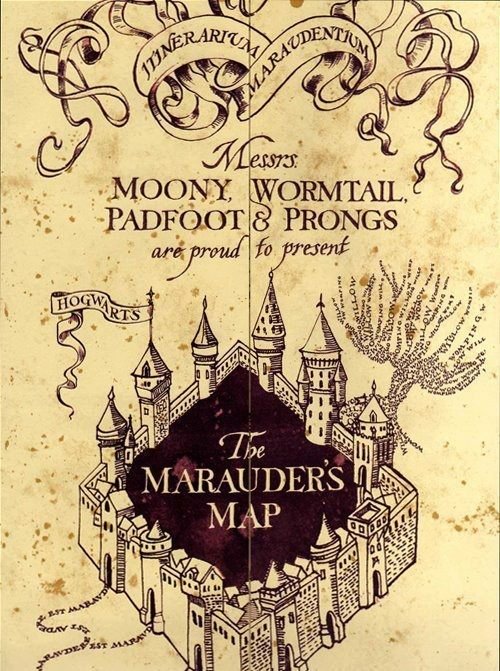 Perhaps no students (even including Harry Potter, Ron Weasley, Hermione Granger and Tom Riddle) have ever explored the castle and grounds of Hogwarts as thoroughly and illicitly as the four creators and contributors to the Marauder’s Map: James Potter, Sirius Black, Remus Lupin and Peter Pettigrew. 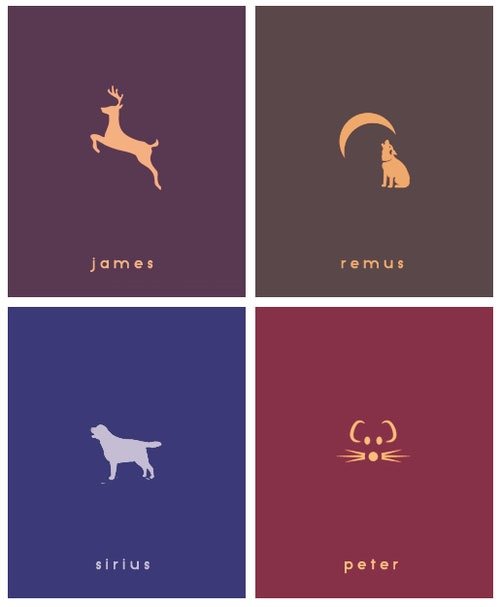 James, Sirius and Peter were not initially impelled to explore the school grounds by night out of devilment alone (though that played its part), but by their desire to help their dear friend Remus Lupin to bear his lycanthropy. Prior to the invention of the Wolfsbane Potion, Lupin was compelled to undergo an excruciating transformation every full moon. Once his condition was discovered by his three best friends, they sought a way to render his transformations less solitary and painful, which led to them learning to become (unregistered) Animagi, so that they could keep him company without harm to themselves. The ability of Sirius, Peter and James to become, respectively, a dog, a rat and a stag, enabled them to explore the castle grounds by night undetected. The interior of the castle, meanwhile, was mapped over time with the help of James Potter’s Invisibility Cloak.

The Marauder’s Map is lasting testimony to the advanced magical ability of the four friends who included Harry Potter’s father, godfather and favorite teacher. The map they created during their time at Hogwarts appears to be a blank piece of parchment unless activated by the phrase: I solemnly swear that I am up to no good, a phrase that, in the case of three of the four makers, should be understood as a joke. The ‘no good’ of which they wrote never denoted Dark magic, but school rule-breaking; similar bravado is evinced by their use of their own nicknames on the map (‘Messrs Moony, Wormtail, Padfoot and Prongs’). 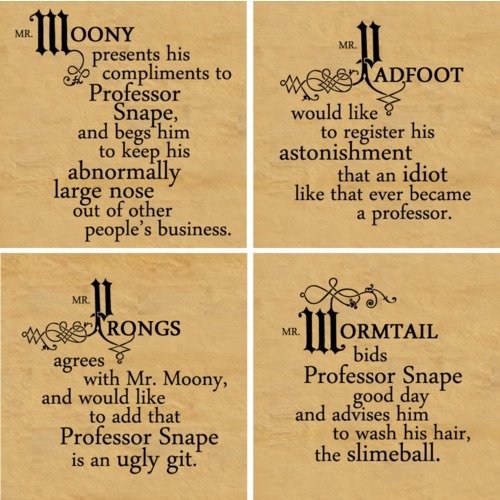 The magic used in the map’s creation is advanced and impressive; it includes the Homonculous Charm, enabling the possessor of the map to track the movements of every person in the castle, and it was also enchanted to forever repel (as insultingly as possible) the curiosity of their nemesis, Severus Snape.

Although the precise circumstances surrounding the makers’ loss of their map are not given in the Harry Potter novels, it is easy to conclude that they eventually over-reached themselves and were cornered by Argus Filch, probably on a tip-off from Snape, whose obsession it had become to expose his arch-rival, James Potter, in wrongdoing. The masterpiece of a map was confiscated in Sirius, James, Remus and Peter’s final year and none of them were able to steal it back from a well-prepared and suspicious Filch. In any case, their priorities changed in their final months at school, becoming far more serious and focused on the world beyond Hogwarts, where Lord Voldemort was successfully rising to power. All four of the map’s creators would shortly be inducted into the renegade organisation headed by Albus Dumbledore, the Order of the Phoenix, and a map of their old school – no matter how ingenious – would no longer be of use to them except as a piece of nostalgia.

The Marauder’s Map was, however, of immense use to the young Weasley twins. The story of Fred and George’s acquisition of the map is told in Harry Potter and the Prisoner of Azkaban. It was a mark of their high esteem for Harry Potter, and their belief that he stood in need of assistance with a destiny none of them yet fully understood, that they later gifted the map to him, unwittingly passing it on to the child of one of the creators.

The map was subsequently confiscated from Harry Potter by a Death Eater in disguise at the school, who recognised it as a likely source of his own discovery.

“The Marauder’s Map subsequently became something of a bane to its true originator (me), because it allowed Harry a little too much freedom of information. I never showed Harry taking the map back from the empty office of (the supposed) Mad-Eye Moody, and I sometimes regretted that I had not capitalised on this mistake to leave it there. However, I like the moment when Harry watches Ginny’s dot moving around the school in Deathly Hallows, so on balance I am glad I let Harry reclaim his rightful property.”

Some of you were wondering if this was just tumblr/fanfic information. It’s not. It’s from J.K. Rowling through her interactive website: https://www.pottermore.com/ , where you can be sorted into a house and gain points by discovering information, making potions and things like that. It’s organized by book/year, and you should know that for now.