Here is part 5 of Harry Potter Backstory series about The Time-Turner from Pottermore by J.K. Rowling.

“I mark the hours, every one.

Nor have I yet outrun the sun.

My use and value unto you,

Are gauged by what you have to do.”

Inscription on every Time-Turner.

In spite of the many Muggle fantasies around the subject, time travel is possible in only a limited sense even in the magical world. While the subject is shrouded in great secrecy – investigations are ongoing in the Department of Mysteries – it appears that magic can take you only so far.

According to Professor Saul Croaker, who has spent his entire career in the Department of Mysteries studying time-magic:

“As our investigations currently stand, the longest period that may be relived without the possibility of serious harm to the traveller or to time itself is around five hours. We have been able to encase single Hour-Reversal Charms, which are unstable and benefit from containment, in small, enchanted hour-glasses that may be worn around a witch or wizard’s neck and revolved according to the number of hours the user wishes to relive.”

All attempts to travel back further than a few hours have resulted in catastrophic harm to the witch or wizard involved. It was not realised for many years why time travellers over great distances never survived their journeys. All such experiments have been abandoned since 1899, when Eloise Mintumble became trapped, for a period of five days, in the year 1402. Now we understand that her body had aged five centuries in its return to the present and, irreparably damaged, she died in St Mungo’s Hospital for Magical Maladies and Injuries shortly after we managed to retrieve her. What is more, her five days in the distant past caused great disturbance to the life paths of all those she met, changing the course of their lives so dramatically that no fewer than twenty-five of their descendants vanished in the present, having been “un-born”.

Finally, there were alarming signs, during the days following Madam Mintumble’s recovery, that time itself had been disturbed by such a serious breach of its laws. Tuesday following her reappearance lasted two and a half full days, whereas Thursday shot by in the space of four hours. The Ministry of Magic had a great deal of trouble in covering this up and since that time, the most stringent laws and penalties have been placed around those studying time travel. 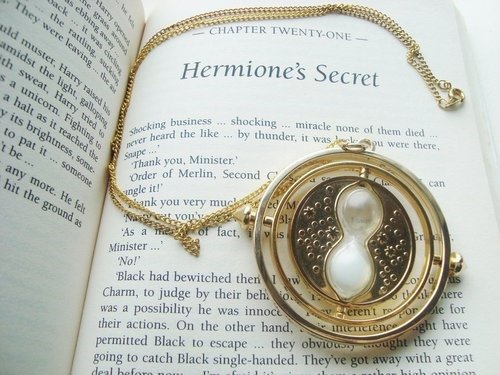 Even the use of the very limited amount of Time-Turners at the Ministry’s disposal is hedged around with hundreds of laws. While not as potentially dangerous as skipping five centuries, the re-use of a single hour can still have dramatic consequences and the Ministry of Magic seeks the strictest guarantees if it permits the use of these rare and powerful objects. It would surprise most of the magical community to know that Time-Turners are generally only used to solve the most trivial problems of time-management and never for greater or more important purposes, because, as Saul Croaker tells us, “just as the human mind cannot comprehend time, so it cannot comprehend the damage that will ensue if we presume to tamper with its laws.”

The Ministry’s entire stock of Time-Turners was destroyed during a fight in the Department of Mysteries about three years after Hermione Granger was granted permission to use one at Hogwarts.

“I went far too light-heartedly into the subject of time travel in Harry Potter and the Prisoner of Azkaban. While I do not regret it (Prisoner of Azkaban is one of my favourite books in the series), it opened up a vast number of problems for me, because after all, if wizards could go back and undo problems, where were my future plots?

I solved the problem to my own satisfaction in stages. Firstly, I had Dumbledore and Hermione emphasise how dangerous it would be to be seen in the past, to remind the reader that there might be unforeseen and dangerous consequences as well as solutions in time travel. Secondly, I had Hermione give back the only Time-Turner ever to enter Hogwarts. Thirdly, I smashed all remaining Time-Turners during the battle in the Department of Mysteries, removing the possibility of reliving even short periods in the future.

This is just one example of the ways in which, when writing fantasy novels, one must be careful what one invents. For every benefit, there is usually a drawback.”