Here is part 8 of Harry Potter Backstory series on Hogwarts Ghosts from Pottermore by J.K.Rowling. 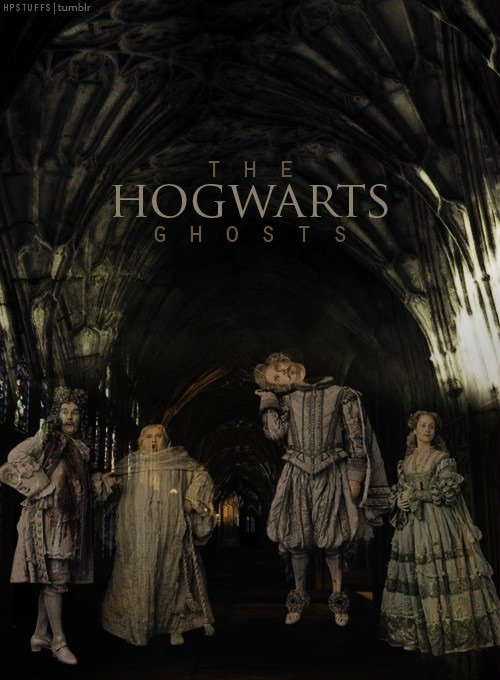 Hogwarts is the most heavily haunted dwelling place in Britain (and this is against stiff competition, as there are more reported ghost sightings/sensings on these damp islands than anywhere else in the world). The castle is a congenial place for ghosts, because the living inhabitants treat their dead friends with tolerance and even affection, no matter how many times they have heard the same old reminiscences.

Each of the four Hogwarts houses has its own ghost. Slytherin boasts the Bloody Baron, who is covered in silver bloodstains.

The least talkative of the house ghosts is the Grey Lady, who is long-haired and beautiful.

Hufflepuff house is haunted by the Fat Friar, who was executed because senior churchmen grew suspicious of his ability to cure the pox merely by poking peasants with a stick, and his ill-advised habit of pulling rabbits out of the communion cup. Though a genial character in general, the Fat Friar still resents the fact that he was never made a cardinal.

Gryffindor house is home to Nearly Headless Nick, who in life was Sir Nicholas de Mimsy-Porpington. Something of a snob, and a less accomplished wizard than he believed, Sir Nicholas lounged around the court of Henry VII in life, until his foolish attempt to beautify a lady-in-waiting by magic caused the unfortunate woman to sprout tusks. Sir Nicholas was stripped of his wand and inexpertly executed, leaving his head hanging off by a single flap of skin and sinew. He retains a feeling of inadequacy with regard to truly headless ghosts.

Another notable Hogwarts ghost is Moaning Myrtle, who haunts an unpopular girls’ toilet. Myrtle was a student at Hogwarts when she died, and she chose to return to school in perpetuity, with the short-term aim of haunting her arch-rival and bully, Olive Hornby. As the decades have rolled by, Myrtle has made a name for herself as the most miserable ghost in school, usually to be found lurking inside one of the toilets and filling the tiled space with her moans and howls.

J.K.R. additionals thoughts: “The inspiration for Moaning Myrtle was the frequent presence of a crying girl in communal bathrooms, especially at the parties and discos of my youth. This does not seem to happen in male bathrooms, so I enjoyed placing Harry and Ron in such uncomfortable and unfamiliar territory.” 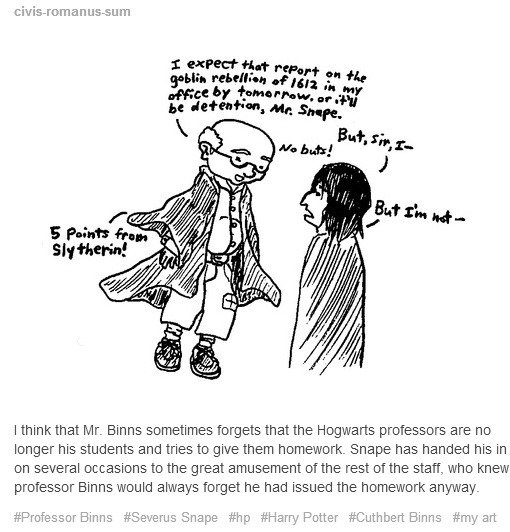 The most productive ghost at Hogwarts is, of course, Professor Binns, the old History of Magic teacher who fell asleep in front of the staff-room fire one day and simply got up to give his next class, leaving his body behind. There is some debate as to whether or not Professor Binns realizes he is dead. While his entrance to lessons through the blackboard is vaguely amusing the first time students see it, he is not the most stimulating teacher.

“The inspiration for Professor Binns was an old professor at my university, who gave every lecture with his eyes closed, rocking backwards and forwards slightly on his toes. While he was a brilliant man, who disgorged an immense amount of valuable information at every lecture, his disconnect with his students was total. Professor Binns is only dimly aware of his living students, and is astonished when they begin asking him questions.”