In this year’s Iowa Caucus, Ted Cruz’s campaign played a rather naughty trick. It seems they spread word to voters that a competitor for the religious vote, Ben Carson, had quit the campaign and endorsed Ted Cruz. It was false, but people believed it. Cruz won Iowa, beating Donald Trump by around 3%. This little dirty trick may have helped him win that race, but it definitely hurt his image. But I’m here to tell you, there’s a long, messy history of political dirty tricks in America, and I swear some of them will blow your mind. (note: I’m not trying to pick on Americans, dirty tricks are universal and sometimes deadly; but it is an election year here, so let’s focus there). 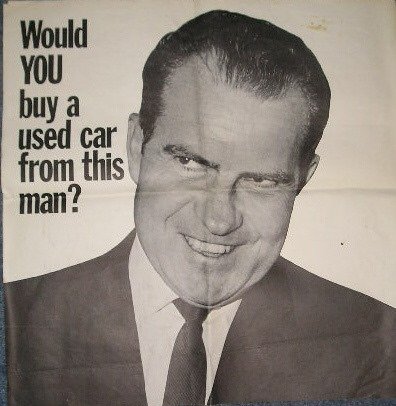 d*ck Tuck was a Democrat who was mostly active in the 60s. He did run for office himself at one point, but he is legendary in politics for the countless goofy pranks he played on Richard Nixon, who ran for office in many of the elections of that decade. His first prank actually happened in 1950, when Nixon was running for the US Senate. He booked Nixon into a big hall but “forgot” to invite people. When Nixon arrived to the almost-empty hall, Tuck introduced him with an endlessly long, absurdly boring speech. Nixon was furious! Later, when Nixon was running for governor in 1962, Tuck ordered up a big banner that read, in Chinese, “What about the Hughes Loan?” Which referred to one of Nixon’s many financial scandals. Later, in the 1968 presidential campaign, Tuck decided to go after Nixon’s campaign motto, which was “Nixon’s the one!” … he hired some pregnant black women to appear at Nixon campaign stops (in white neighborhoods), carrying signs reading “Nixon’s the one” — suggesting he was the baby daddy. When d*ck Tuck lost his own election, his concession speech contained a famous quote: “The people have spoken, the bastards.” No doubt other politicians could relate. 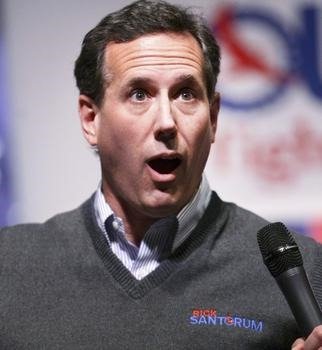 Rick Santorum of Pennsylvania was once a very successful politician. Congressman, senator, with aspirations for the White House. He’s a Republican, and quite conservative. Early in the 2000s, he began advocating heavily against gay rights, not only opposing same-sex marriage but civil unions too. Dan Savage, media personality and LGBT activist, held an online competition to come up with a gross sex term they could nickname “Santorum.” Well, it was a huge hit, and damn if it didn’t work: Googling Santorum’s name turned up that really icky term (at least I think it’s icky), sometimes as the top result. It’s been years now, so that term is no longer at the top of the page, but it’s still on the front page! He’s asked Google to delete that result but they’ve refused. His political career has sharply declined, at least in part due to this little trick. As for Rick Santorum himself, he’s still anti-gay, but interestingly he’s been spotted expressing a tiny bit of empathy for members of the LGBT community. 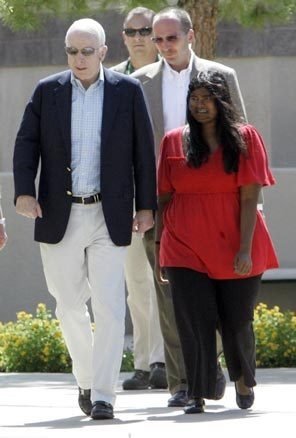 In the 2000 Republican primary, Senator John McCain was doing unexpectedly well against the well-funded George W. Bush. But just before the South Carolina primary, voters started receiving propaganda phone calls disguised as opinion polls (they’re called “push polls”) that asked: “Would you be more likely or less likely to vote for John McCain if you knew that he fathered an illegitimate black child?” And he did sometimes campaign with a young woman of dusky complexion. The rumor spread like wildfire, and was even talked about in the media, stoking deep, ugly-as-hell racist sentiment. But guess what, John McCain has ten kids, several of whom he has adopted. One is a daughter named Bridget, who was a Bangladeshi orphan who the McCain family brought from Mother Theresa’s orphanage for medical care and ended up adopting her. It goes without saying that Bush won the state and had the momentum to get the nomination. John McCain was sickened by the whole affair. Imagine seeing the daughter you loved being talked about that way. 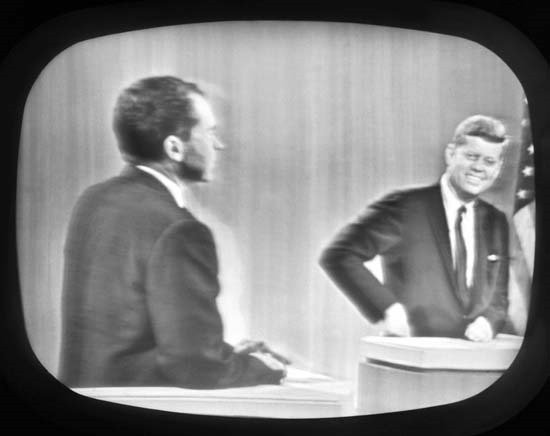 There are many, many tales of dirty tricks, big and small, associated with the Kennedy clan. For instance when John F. Kennedy was running in his first primary (in 1946), JFK’s dad Joe (rich and obsessed with his kids being winners) got someone to enter the race who had the same name as JFK’s chief opponent. The vote was split, JFK won and the rest is history. Later, when JFK was running for president in 1960, he took part in the first televised presidential debate ever with his opponent Richard Nixon. JFK made a show of declining the network’s offer of makeup, so Nixon, not wanting to seem like a crybaby, also refused. But backstage JFK did get makeup, so when they went to air JFK looked tanned and rested while Nixon looked sweaty and exhausted. There are lots of stories about that debate. But when the vote was finally held, it was one of the closest in history. The vote that might have swung the whole thing over was the state of Illinois, which ended up in JFK’s column.  We’ll never know for certain, but it’s always been suspected that Joe Kennedy got together with Mayor Daley of reliably corrupt Chicago, and maybe even the mafia, to stuff ballot boxes in favor of JFK. Indeed there’s a popular theory that those same Mafiosi were furious by the crackdown on the mob by the Kennedys, feeling they were owed favors because of that alleged ballot-box-stuffing, and this sense of betrayal resulted in JFK’s assassination. Could be, but there’s no way to know for sure. 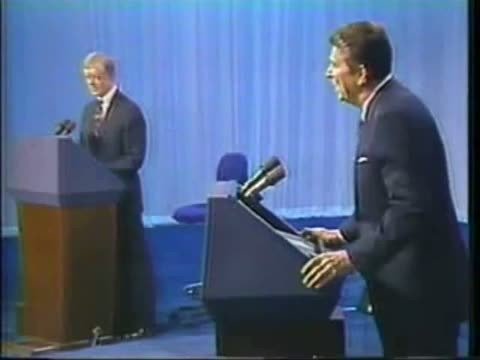 In 1980, America was in a mess. There were hostages being held in Iran, there was a recession, the Cold War was getting colder, and Air Supply insisted on putting out music. So President Jimmy Carter was way behind in the polls against Republican nominee Ronald Reagan. But as the campaign went on, Carter started climbing in the polls. He refused to debate Ronnie, who, we sometimes forget, was an off-the-cuff George W. Bush-type of speaker who often put his foot in his mouth. After seeing him in action, Team Carter decided to debate Reagan after all. But right before the debate, they discovered that someone had stolen all their notes out of the White House. Those docs listed all the responses Carter planned to make, all the questions he planned to ask, basically all their prep. They couldn’t cancel without looking like idiots, so they went ahead with it. And in the debate, Reagan basically gave the best performance of his life. He was suave, composed, witty, and generally came off as totally presidential. He ended up winning the election, and Carter always blamed the theft of those notes for his loss. Who stole them? Suspects include columnist George Will and later CIA head (and Iran-Contra figure) William Casey, but no one knows for sure. Did Ronnie actually use them? Well, they were found in a dumpster behind his headquarters, which doesn’t look too great.

In the 2004 election, then-president George W. Bush squared off against current Secretary of State John Kerry. Decades earlier, Kerry was in the US Navy, where he served on a swift boat in the Vietnam War, seeing tons of combat and winning the Purple Heart, the Bronze Star and the Silver Star; Bush served in the Air National Guard. Today members of the Guard routinely serve in combat, but back then they stayed home – it was tough to get into the Guard, you needed connections (which young George definitely had). But in 2004, with the Iraq War raging (and looking terrible), Kerry’s military background was looking mighty desirable to a lot of people (plus there’s an underlying “establishment” aspect to Bush’s service). So how to hurt him? Well in the midst of a campaign a group magically appeared called Swift Boat Veterans for Truth. Swift Boats were the type of boats Kerry and others had used in the war, and these guys claimed Kerry had lied about his record in order to get medals and lied about war crimes in order to drum up opposition to the war. Some of the members of this group were old enemies of Kerry’s, and few had served at the same time and place as him. They had no real evidence for their claims. But the media ate it up, making it a powerful distraction from Kerry’s campaign, and the Democrats obviously had no idea how to respond. It’s hard to say if this “Swiftboating,” as it’s come to be called, won Bush a second term, but by attacking Kerry’s most positive attribute these guys definitely did some damage.

Yes, covert ops. With most dirty tricks, the people carrying them out are shady back-room operators shaking hands and making deals, but Nixon took things to a whole new level. For the 1972 election, he assembled a team of ex-CIA and FBI guys, many of them with big-league experience in places like Cuba, to act as a sort of personal political spy agency to target Nixon’s enemies. They drew up an utterly insane list of possible ops (Google “project gemstone” for more) and ended up carrying out crazy dirty tricks, such as circulating false letters to get politicians in trouble, distributing incriminating stories to the press, and attempting to plant hidden microphones at Democratic headquarters (they got caught in this, but it wasn’t till after the election that the sh*t hit the fan, forcing Nixon to resign). Other exploits are only rumours, including the idea that they were behind a rash of Washington break-ins at that time where the burglars focused on papers and documents among journalists, lawyers, politicians and so on. The true extent of their activities will never be known, but former members hinted they did a lot of bad stuff. And yes, they reportedly did discuss assassination but never killed anyone. In the end, Nixon won the 1972 by a massive landslide, but within a year he was circling the drain due to the dirty tricks committed to win that election.

08. The most disgusting dirty trick of all time 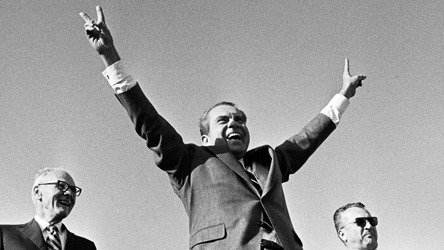 This one will truly horrify you. Back in 1968, Nixon was running for president. The Vietnam War was raging, protesters were everywhere, and a right-wing candidate was siphoning off Nixon’s votes. The Democrats were weak, though, because the war was hated by a lot of people. However President Lyndon Johnson, who wasn’t running for re-election, made an effort to end the war — something that would greatly help the Democratic candidate, Hubert Humphrey. Peace talks began and made good progress. Nixon freaked; a peace deal would almost certainly cost him the election. So what did he do? With the help of Henry Kissinger, who at that time was pro-Democrat, Nixon made contact with Nguyen Van Thieu, dictator of American-allied South Vietnam. Nixon urged Thieu to reject Johnson’s peace deal, insisting he’d get a much better deal once Nixon became president. Thieu didn’t like Johnson’s peace deal but was going to accept it. But at Nixon’s urging he rejected the deal, which then collapsed. The war raged on and Nixon won. Nixon did indeed sign a peace deal 5 years later, in 1973, but it was almost exactly the same as the 1968 agreement. Thieu hated this one too, but Nixon forced him to sign. And in those five extra years of war, how many people died? Hundreds of thousands, including several thousand US soldiers. It’s hard to imagine a dirty trick worse than this one. Lyndon Johnson found out about it and had a very simple word for it: treason. But Nixon — he really, really wanted to be president. And he was!