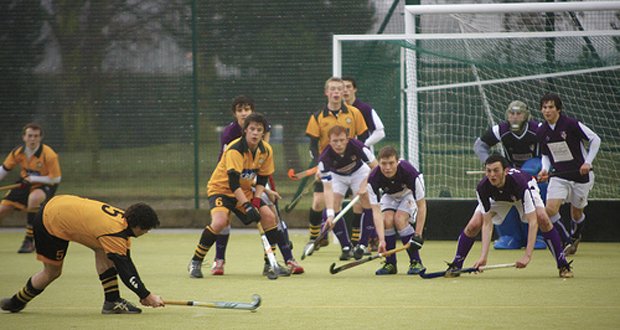 1. 26.5 million Canadians tuned into the gold medal final in men’s hockey during the 2010 Winter Olympics. That’s 80% of the entire country’s population. – Source

2. When the Latvian hockey team plays at home and wins a game, fans pay a visit to the embassy of the opposing team’s home country and lay flowers at its gate. – Source

3. Rhode Island School of Design’s hockey team is called the Nads, their cheer is Go Nads, and their mascot is a giant penis with testicles. – Source

4. Keanu Reeves was so good at being a hockey goalkeeper he was nicknamed ‘The Wall’. He dreamed of playing hockey for Canada but an injury ended his hopes for a career in the sport. – Source

5. The “Nation” referred to by the National Hockey League (NHL) is Canada. – Source

6. Statistical analysis of hockey fights confirmed what coaches have long believed, that sending a player out to fight can significantly shift momentum in a game. Researcher Terry Appleby found that 76% of fights resulted in a ‘momentum surge’ for one team and 23% ended in a surge for both teams. – Source

7. After a face injury during a hockey game, Jacques Plante wore one of the first goaltender masks, against his coach orders. The Canadian won the game and went on an unbeaten streak of 18 games. His coach then forced him to stop wearing the mask and they lost. – Source

8. The Slovakian women’s hockey team qualified for the 2010 Olympics by beating Bulgaria 82-0 and then lost to team Canada in Vancouver 18-0. – Source

10. Even if Wayne Gretzky never scored a single goal he would still have more points than any other past/present hockey player. – Source

11. Every year the US men’s hockey team has won a gold medal they’ve had someone from Warroad MN on the team. The city’s current population is 1781. – Source

12. On March 5, 2004, there was a hockey game between the Philadelphia Flyers and Ottawa Senators where there was a total of 419 penalty minutes assessed. – Source

14. The average distance ran during soccer (football) match is 7 miles with field hockey close behind with 5.6 miles. – Source

15. The world’s 3rd most popular sport is field hockey, with an estimated 2 billion fans globally. It is only surpassed by association football (soccer) and cricket. – Source

16. The South African Women’s Field Hockey team successfully qualified for the 2016 Games by winning the African Championships but were forbidden from attending by their own country’s Olympic Committee, arguing the team did not rank in the Top 6 of the World League and thus did not deserve to attend. – Source

17. Allan Loney was the first hockey player to be charged with murder for the death of another player, after he clubbed Alcide Laurin to death during a game on February 24, 1905. – Source

18. Once while playing a hockey game, Indian hockey legend Dhyan Chand wasn’t able to score a goal against a team. After many misses, he argued with match referee about the measurement of the goal post, and it was found to not be in conformation with an official width of goal post under international rules. – Source

20. Canadian $5 notes have people playing hockey on them and a short excerpt from a story about hockey. – Source

February 23, 2017
Latest Posts
Subscribe to Blog via Email
Did you know?
Loading...
Facts of the Day
Registration is disabled.