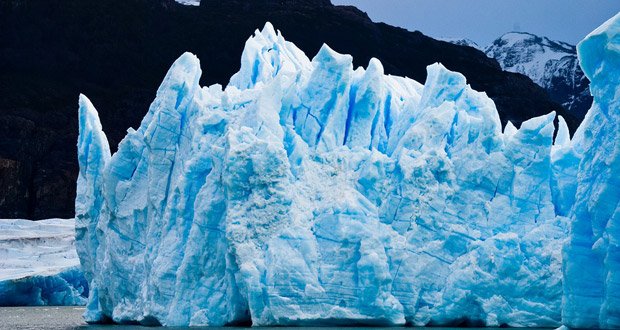 1.There is a glacier in Montana that is named after the tens of millions of now extinct grasshoppers that can be found trapped in the ice. – Source

3. There is a glacier called “Blood Falls” in Antarctica that regularly pours out the red liquid, making it look like the ice is bleeding. – Source

4. Up until 1968 burning hot embers were spilled from the top of Glacier Point in Yosemite National Park to the Valley 3,000 feet below. – Source

5. In 1985, a volcano in Colombia that was covered in glaciers erupted, instantly melting the glaciers. Two hours later, a 100 ft deep flood of rock and water traveling 39 feet per second leveled an entire nearby village, killing 20,000 out of its 29,000 residents. – Source

6. Glacial retreats in southern Alaska are leading to an increase in the frequency of earthquakes. The Bering Glacier, in particular, is so massive its weight stabilizes the subduction of the Pacific plate underneath the North American plate. – Source

7. Glaciers are home to Ice Worms and the worms can melt if heated to 40F. – Source

8. Because of the deposition and compaction of layers of well-formed snowflakes, glacier ice has a much more consistent structure than frozen water, making it technically a form of rock similar to limestone. – Source

9. When Otzi, a well-preserved 5300-year-old mummy, was found in a glacier, hikers thought it was a body from war atrocities of WW2. Also, Otzi is known to have 19 living relatives to this day. – Source

11. The Hudson Bay in Canada was formed during the last ice age when the weight of glaciers on the continent pushed the crust below sea level. Now that the ice is gone, the bay is currently in the process of rebounding outwards. – Source

12. The uneven rising of sea levels is in part explained by the reduced gravity of glaciers. – Source

13. The practice of glacier growing takes place in the Himalaya regions aimed at creating small new glaciers to increase water supply for crops. Farmers acquire ice from naturally occurring glaciers and carry it to high altitude areas where the ice is put inside a small cave dug out in a slope. – Source

14. Greenland is rising 1 inch per year as glaciers melt, alleviating the land of its weight. – Source

16. In 2002, the entire Kolka Glacier broke free, killing 125 people and reaching speeds over 100km/h. Although the glacier was completely destroyed, it reappeared just 2 years later. – Source

17. Australia is the only continent without any glaciers. – Source

19. When the Great Lakes were formed during the last ice age, the massive glaciers responsible distorted the Earth’s crust so much that the Great Lake area is still rebounding and has fluctuating water. – Source

20. There is more snow and ice in the glaciers of Mount Rainier than all the other 12 Cascade Mountain volcanoes put together. – Source

21. Glacial ice is the largest reservoir of freshwater on Earth. – Source

22. Salt glaciers can rarely form, and that they flow just like ice glaciers do. – Source

23. There is a glacier named Nameless Glacier because explorers didn’t name it at the time. – Source

24. The Boundary Waters lakes in Minnesota were carved out by glaciers 17,000 years ago. – Source

25. The southernmost glacier in the United States lies at around the same latitude as Las Vegas. – Source