1. In 1881, an ice floe forced the Sharp’s Island Lighthouse off its foundations, after which it floated nearly five miles down the Chesapeake with its keepers still inside until it ran aground, allowing the men to escape unharmed. – Source

2. The Eilean Mor Lighthouse Mystery is the mystery where all three Lighthouse keepers on a remote island vanished. The logs found to reference a brutal storm that lasted days, even though a neighboring island that had a view of the Lighthouse reported calm weather. – Source

3. Bishop Rock is a tiny island 4 miles off the coast of Cornwall, and its single lighthouse makes it the “world’s smallest island with a building on it”. – Source

4. All lighthouses on the U.S. coastline have been fully automated for roughly 30 years. – Source

5. Russia has hundreds of nuclear-powered lighthouses and beacons along the Northern Shipping Route. – Source

6. There is a lighthouse still in use that was built by the Romans during the 2nd century AD. – Source

7. A rogue North Atlantic wave broke 67m (220 ft) above sea level, shattering 23 windows and flooding the Eagle Island lighthouse in Ireland. Workers were unable to open the door due to water pressure, forcing them to drill it to drain the tower. – Source

8. The border between Finland and Sweden crosses through a small island in an unusual way because back in 1885 the Finns accidentally built a lighthouse on the Swedish side of the island. – Source

9. There is a hollow octagonal tower on the Devon coast which is a “Daymark”, essentially a lighthouse with no light, which was erected in 1864 as a daytime navigational aid to mariners entering Dartmouth Harbour in the South of England. – Source

10. A Byzantine eunuch spy has been responsible for the final destruction of the lighthouse of Alexandria while searching for hidden treasure. – Source

11. The Sandy Hook Lighthouse in New Jersey, built in 1764, is the oldest working lighthouse in the United States. At that time, it stood only 500 ft (150 m) from the tip of Sandy Hook; however, today, due to growth caused by littoral drift, it is almost one and a half miles (2.4 km) inland. – Source

12. There is a lighthouse 30 miles off the coast of North Carolina. After being decommissioned, it was bought by a private individual and made into a bed and breakfast. – Source

13. There is a Lighthouse in Michigan that due to freezing water and harsh winters becomes completely encased in ice. – Source

14. There is a tradition that dates back to 1929, known as “Flying Santa”, where gifts are dropped from planes to lighthouse keepers across the New England coast. – Source

15. The National Historic Lighthouse Preservation Act of 2000 allows groups and individuals to own obsolete Lighthouses. – Source 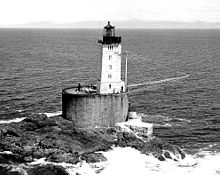 16. The total construction expense of the St. George Reef lighthouse came to $752,000 (equivalent to $20 million today) making it the most expensive lighthouse ever built in the U.S. and more than double the initial estimate. It sits 6 miles off the coast of California. – Source

17. The “Green Point Lighthouse” is the oldest operational lighthouse in South Africa. – Source

18. The Fresnel lens in Florida’s St. Augustine lighthouse was initially built so that it wouldn’t spin. However, this caused the lens to focus sunlight on the surrounding brush which started many brush fires. This caused the need to have part of the lens constantly remain in motion. – Source

19. The Statue of Liberty was originally designed as an Arab peasant located in Egypt and serve as a lighthouse for the Suez Canal. – Source

20. In Vancouver, Canada, exploding a stick of dynamite at a nearby lighthouse was previously used to announce 9:00 PM. – Source

21. The remains of ~30 people are interred in a lighthouse a mile off the Oregon coast. – Source

22. Alcatraz Island built the first operational lighthouse on the West Coast of the United States. – Source

23. Stannard Rock is the most distant (from shore) lighthouse in the United States. – Source

AskReaders: What is the most “grown-up” purchase you bought recently that you would have not been excited for as a child?