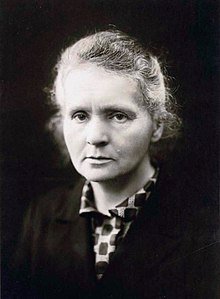 1. Marie Curie’s lab papers from the 1890’s are still radioactive. They are stored in lead-lined boxes and one must don protective gear to see them. – Source

2. Marie Curie was the first woman to win the Nobel Prize, but also the first person (man or woman) ever to win the award twice and for achievements in two distinct scientific fields; Chemistry and Physics. – Source

3. Marie Curie, who discovered polonium and radium, used to carry it around in her pocket, and even admired the glow of it at night, which ultimately led to her death. – Source

4. Marie Curie’s daughter also received a Nobel prize in chemistry. And she also shared it with her husband. – Source

5. Albert Einstein once needed a letter of recommendation from Marie Curie to secure a job. – Source

6. Marie Curie was the first woman to be buried at the Panthéon in Paris in honor of her own merits, and the second woman in history to be enshrined there. – Source

7. Even after winning the Nobel Prizes, Marie Curie was a victim of xenophobia in France, shown in tabloids as being a “foreign Jewish homewrecker” for an affair she had in 1910-1911. – Source

8. When World War I broke out in 1914, Marie Curie (Pioneer in radioactivity)suspended her studies and organized a fleet of portable X-ray machines for doctors on the front. – Source

10. The country of Togo printed a postage stamp with a photo of an actress portraying Marie Curie, thinking it was actually Marie Curie. – Source

11. Marie Curie’s chemistry laboratory became a public museum after it was decontaminated and reconstructed. Other items on display include notes of Pierre and Marie Curie that date from 1902 and show the calculation of the atomic mass of radium. – Source

12. Marie Curie once received a gram of “crowd-sourced” radium after the AAUW raised money from the public to buy her more. The fundraiser began the Marie Curie  Fellowship. – Source

25 Uplifting Headlines of the Week - Part 90