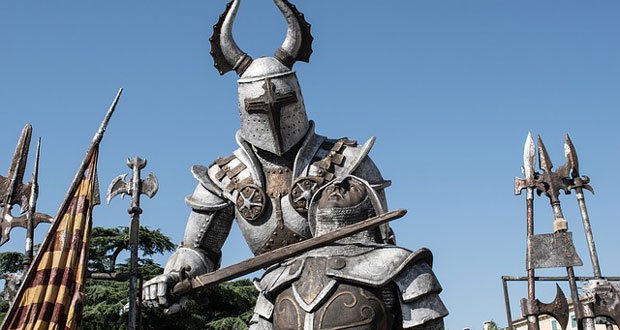 26. People in the medieval ages never actually believed the Earth was flat. It was a myth created during the evolution debate in the late 1800s. – Source

27. There’s a castle being built using only the techniques and materials used in the Middle Ages. When completed in the 2020s, it should be an authentic recreation of a 13th-century medieval castle. – Source

28. There are depictions of Medieval Knights fighting snails in ancient manuscripts and nobody knows why. – Source

29. The most prolific serial killer in medieval Europe, and possibly ever, was executed by having all of his limbs broken and threaded through the spokes of a wheel. He was kept alive and conscious on the wheel for 9 days by a daily dose of a “strong drink”. – Source

30. There isn’t much evidence at all for chastity belts to specifically prevent sex during the medieval period. – Source

31. The biggest medieval codex ever discovered is a collection of manuscripts commonly referred to as the Devil’s Bible; the ‘Codex Gigas’ weighs about 165lbs (roughly 75kg) and is said to be a product of a desperate monk’s deal with Lucifer himself. – Source

32. Medieval royal courts had professional farters that were rewarded with houses and land. The most famous was Roland the Farter in the 12th Century or Pujol, who could shoot water up to 5 feet. – Source

33. In medieval England, pregnancy was considered impossible without orgasm. Therefore, if a woman was raped and didn’t conceive, there was no evidence, but if she did conceive, it was assumed she enjoyed it. Either way, the rapist would not be convicted. – Source

34. The infamous “Iron Maiden” of the Medieval Period was never used and was actually a fake, constituted from misappropriated Medieval bits and pieces by Victorian Curators in order to make some money. – Source

35. The chanting in Star Wars’ iconic song “Duel of the Fates” is not a gibberish alien language, but a Sanskrit translation of a medieval Welsh poem. Other chants in the Star Wars series make use of Sanskrit as well. – Source

36. The Cagots were a minority population in Europe in the medieval period. They were shunned, hated, and segregated from entering taverns or touching food in markets. They were not an ethnic or religious group and were indistinguishable from other people, and no one knows why they were so despised. – Source

37. In medieval period clothes were stored close to the toilet shaft, as the ammonia fumes would kill any fleas. – Source

38. The urine of ginger boys was prized in medieval Europe for making stained glass. – Source

39. The Cathars was a medieval Christian sect that condemned war and capital punishment; believed in reincarnation, two gods of good and evil and largely endorsed gender equality. They were annihilated by the Catholic Church. – Source

40. The phrase ‘crocodile tears’ refers to a medieval belief that crocodiles shed tears of sadness when killing and consuming their prey. – Source

September 26, 2017
Latest Posts
Subscribe to Blog via Email
Did you know?
Loading...
Facts of the Day
Registration is disabled.