1. Lolita, the killer whale, has been kept in Miami Seaquarium since 1970. The orca is 20 ft long, and her tank measures 60 by 80 ft by 20 ft deep. Her only company for 10 years was Hugo, who died after a brain aneurysm caused by repeatedly banging his head on the tank windows. – Source

2.  After a Florida Highway Patrol Officer ticketed a Miami cop for driving in excess of 120MPH on his way to an off-duty job, she was relentlessly harassed by other officers, including finding out that her driver’s license info had been accessed by 88 officers from 25 agencies over three months. – Source

4. The Miami zoo put 30 flamingos in the bathroom during hurricane Andrew in 1992 to ride out the storm. An image of them huddled inside became one of the most iconic from that hurricane. – Source

5. Miami has never recorded a temperature over 100°F. – Source

6. They never found “bath salts” in the toxicology reports for the Miami Cannibal attack, leaving the ultimate cause of his behavior unknown. – Source

7. In 2013, the village of Miami Shores forced a married couple to either stop growing vegetables or pay $50 per day, they justified their decision by saying vegetables are “ugly”. – Source

8. The President of Ecuador offered to let the U.S. keep an airbase in his country, but only if Ecuador could have a base in Miami. – Source

9. A 2005 research by the University of Miami on lethal injections in the U.S. found that the postmortem blood concentration of anesthetic (Sodium thiopental) in 43 out of 49 executed inmates were lower than that required for surgery. 21 inmates had concentrations consistent with awareness. – Source

10. In the mid-1990s homeless children in Miami developed a vast, elaborate, and consistent mythology that spread by oral tradition throughout the community as a coping mechanism. – Source 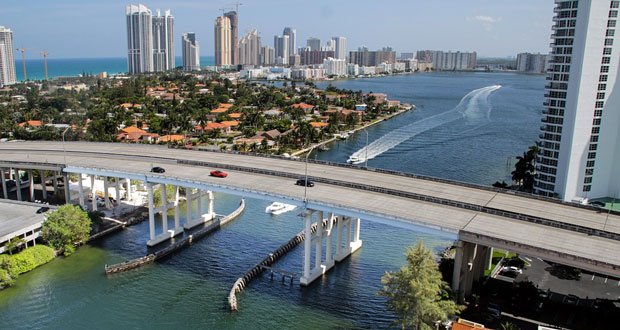 11. Miami, Florida is sinking beneath the sea and relies on underground pumps to pump waters out of the storm drains to keep the city from flooding. – Source

12. In Yao Ming’s first game in Miami, the Heat passed out 8,000 fortune cookies. Yao was not angry with the promotion because he was not familiar with American stereotypes of Chinese. Yao said he had never seen a fortune cookie in China and guessed it must have been an American invention. – Source

13. In 2004, two Brazilians were arrested in Miami International Airport, after one, asked about his air pump, said that he was carrying a “bomba” (Portuguese for “pump”). This, complete with an “it might explode” comment from the other Brazilian, led to both being imprisoned. – Source

14. Miami Police Department uses fixed microphones throughout the city and a special software to automatically pick up any gunshots and triangulate their origin to a couple of meters accuracy. Allowing them to immediately dispatch officers there. – Source

15. A Miami Beach cop was caught on video stealing thousands of dollars of merchandise from a CVS where he was working the 2nd shift as a guard. The video showed that he was claiming to work 6-7 hours but was only there for three. He was not fired. – Source 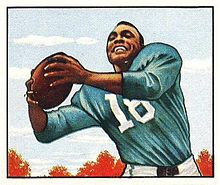 16. In 1945, the University of Miami offered high school football player Wallace Triplett a scholarship sight unseen, given his reputation and his address, under the assumption Triplett was white. When the then-segregated university discovered Triplett was black, they rescinded the scholarship. – Source

18. 74.55% of Miami’s population speaks a language other than English at home. – Source

19. A massive smuggling operation at Miami Airport came to light when an American Airlines pilot was accidentally served a mixture of coffee and heroin from a smuggled parcel and complained that his coffee tasted funny. – Source

21. In the late ’60s and ’70s, the Orange Bowl in Miami had a tank with a live dolphin which would jump to celebrate touchdowns and field goals. – Source

22. A parking garage in Miami Beach was described as having a “stunning” design and has hosted weddings, wine tastings, and dinner parties. – Source

23. In January 1977, it snowed in Miami, the furthest south it has ever snowed in Florida in recorded history. – Source

24. Miami, Dubai, and Taipei are on the same latitudinal line. – Source 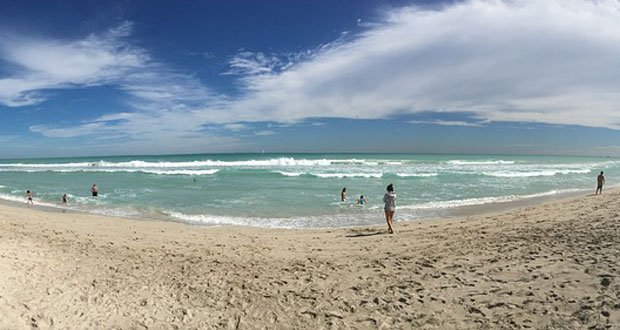 26. All of the sand on Miami Beach has been placed there artificially, and they are running out of the sand. Recent sources say the sand has dried up. – Source

27. For several years, a colony of sex offenders lived under a bridge in Miami. – Source

29. Internet Personality Dan Bilzerian was banned from a Miami nightclub for kicking model Vanessa Castano in the face. – Source

30. Much of the Miami’s skyline was built with drug money. – Source