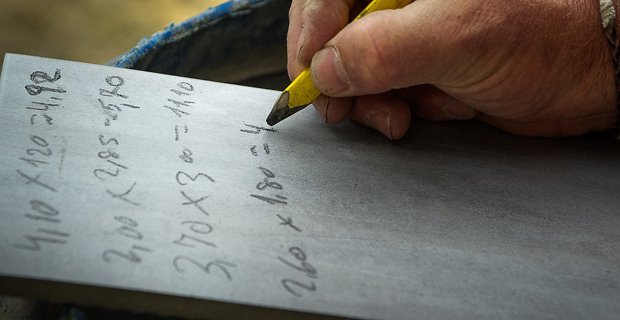 2. Schoolhouse Rock! was created by an ad agency executive who noticed that his son had learned every Beatles lyric but could not remember multiplication tables. – Source

3. Ancient Egyptians used a method of multiplication and division which is completely different to our own, but very similar to that used by computers. – Source

4. Lewis Carroll was a brilliant mathematician, and when Alice says, “4 X 5 = 12” it’s not nonsense but multiplication in base 18. – Source

5. Gottfried Wilhelm Leibniz was the first man to use binary computational methods to build a mechanized computer to do multiplication, addition, algebra, etc. in the 1670s. – Source

6. The multiplication sign was chosen for religious reasons. – Source

7. Before logarithms were used for easier multiplication and division (on devices like slide rules), mathematicians used a trigonometric algorithm known as Prosthaphaeresis to simplify complex arithmetic. – Source

8. The Roman numeral IV was originally IIII and made Roman multiplication simpler with less memorization. – Source

9. Math multiplication lattices are similar to Napier’s Bones if you could modify the values on the bones. – Source

11. Some teachers use “fact triangles cards” instead of square flashcards. These three-sided cards have an entire fact family on the three corners of the triangle, which helps students internalize the relationship between multiplication and division. – Source

12. A 7 years old Samarth Bhagyesh Patel from India holds the record for solving 10 random multiplication items correctly the fastest, with a time of 1 minute 30.60 seconds. –  Source

13. The word “multiply” is from the Latin multus, meaning “multi” + plex, meaning “fold”—which, in turn, is from the Proto-Indo-European plek, which means “to plait.” – Source

14. Italian author Andrea Camilleri once said, “In moments of crisis, all you gotta do is review your multiplication tables, and it’ll all blow over!” – Source

15. While the Babylonians were the first to use multiplication tables over 4,000 years ago, their tables were based on base 60. The oldest known tables using base 10 (similar to modern mathematics) were the Chinese, dating to about 305 B.C. – Source

April 13, 2017
Latest Posts
Subscribe to Blog via Email
Did you know?
Loading...
Facts of the Day
Registration is disabled.