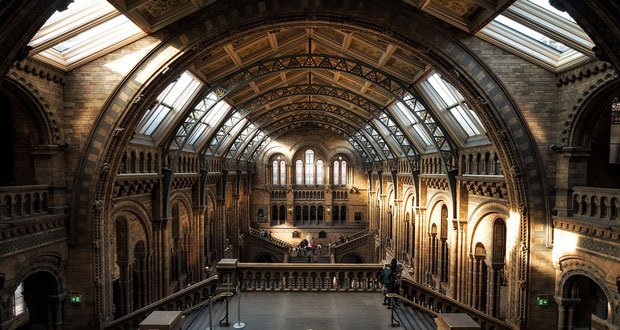 1. The Mask of Warka, the oldest discovered accurate depiction of a human face (3100 BC), disappeared from the National Museum of Iraq after the 2003 U.S. invasion. A U.S. military mission to recover lost artifacts found the mask, undamaged, buried in a farmer’s backyard. – Source

2. The beard of Tutankhamun’s golden mask fell off during the cleaning process in the Egyptian Museum in 2014. The workers used epoxy glue to reattach the beard, but since that was not the professional method and permanent damage was done to the mask they were prosecuted for this in 2016. – Source

3. There are more museums in the U.S. than there are Starbucks and McDonald’s combined. – Source

4. President Garfield’s assassin chose an ivory-handled gun over a similar wooden-handled model because he knew it would look better in a museum exhibit. – Source

6. Sue, the largest and most complete Tyrannosaurus skeleton ever found, was going to be put in a private collection before companies including Disney and McDonald’s helped fund the Field Museum’s effort to purchase her for display to the public. – Source

8. Barnum’s American Museum had crowds that would linger inside too long. To make way for new paying guests, signs saying “This Way to the Egress” were put up. Not knowing Egress was another word for Exit, people followed the signs to what they assumed was a fascinating exhibit but ended up outside. – Source

9. The camera that recorded the only known footage of the first plane strike on 9/11 is now in the Smithsonian Museum. – Source

10. There is a museum in Croatia named “Froggyland” which is entirely composed of over 500 stuffed Frogs in human positions. – Source

11. The largest art heist in history was completed in 1990 at the Isabella Stewart Gardner Museum in Boston, totaling 13 paintings worth $500M. To this day, all of the empty frames are still hanging, acting as placeholders until the pieces are returned. – Source

13. A snail spent years glued to a card in the British Museum before they realized it was alive. – Source

15. In Hamburg, Germany, there is a Food Additives Museum dedicated to the emulsifiers, stabilizers, dyes, thickeners, preservatives, and flavorings in our everyday foods. The exhibits explain the history and current landscape of food additives in an informational rather than political way. – Source

16. There is a Museum of Broken Relationships in Croatia; you can go and leave there personal objects left by former lovers, accompanied by brief descriptions. – Source

17. Not only is there a full taxidermied whale in a Swedish museum, but a couple was once caught having sex inside. – Source

18. An anonymous donor sent two Bronze Age axes and two pieces of rare Viking jewelry to the National Museum of Ireland in Dublin. The museum believes the items were illegally excavated. – Source

19. There is an atomic bomb museum in New Mexico, where the first A-bomb was detonated. The museum is only open 12 hours each year. – Source

20. Older U.S.A. presidential limousines are at the Henry Ford Museum, but after Sept. 11, 2001, the Secret Service adopted a policy to destroy the limos after they are taken out of service in order to protect their security secrets. – Source

21. There is a photograph in the virtual museum of Canada dated from 1941 where a man in modern clothes is thought to be a time traveler and is given the name of “The time-traveling hipster”. – Source

22. The Soviet Union closed down many churches and reopened them as Museums of Atheism dedicated to scientific education and anti-religious exhibitions. – Source

23. A 13-year-old spotted an incorrect prop in the Al Capone museum exhibit because he casually knows the production timeline of antique radios. – Source

24. There is a Museum of Failed Products in Ann Arbor, containing thousands of consumer products that never took off, including gems like Clairol’s A Touch of Yoghurt shampoo and Pepsi’s AM Breakfast Cola. – Source

25. A 120-meter-deep, 17th-Century salt mine in Romania has been converted to the world’s largest salt mining museum and amusement park, complete with a Ferris wheel, an amphitheater, light shows on the rock walls and boat rides on a subterranean lake. – Source

January 20, 2018
Latest Posts
Subscribe to Blog via Email
Did you know?
Loading...
Facts of the Day
Registration is disabled.