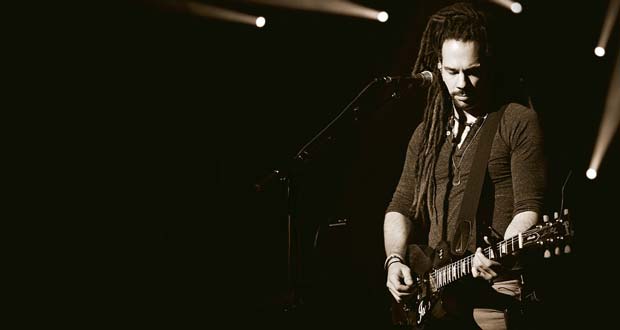 3. Jesse Rae, a Scottish funk musician dresses as a Scottish Centurion, and his career ended largely due to his mistrust of the English. – Source

4. Joseph Haydn, a classical music composer, wrote a musical piece in which the musicians gradually leave the stage until 2 violins are left in the end. – Source

5. The first streaming music service started in 1897. Users in New York could pick up their phones and connect to the Telharmonium, a central hub that would pipe music being played live by two musicians playing 24 hours a day. – Source

6. Musician Mark Mothersbaugh described work on Pee Wee’s Playhouse as “Really chaotic. They’d send tape on Tuesday, I’d write music on Wednesday, record music on Thursday and we’d watch it on TV Saturday. Instead of writing an album once a year I was writing an album’s worth of music in one week.” – Source

7. Musician Jack Johnson donated 100% of his 2008 tour profits to charity. His tours since have donated to and supported many environmental charities local to where the band plays. – Source

9. Hitler loved Irish music and invited an Irish musician to play for him in Berlin in 1936. However there was no room for the musician to sit, so Hitler ordered an S.S member on his hands and knees to act as a chair so the Irishman could perform his music. – Source

10. Sujeet Desai is an accomplished musician born with Down syndrome. Sujeet plays seven instruments and graduated from high School with honors from the Berkshire Hills Music Academy in Massachusetts. He travels worldwide to do inspirational solo music performances and self-advocacy workshops. – Source

11. The Tommy Johnson character in O Brother Where Art Thou was based on a real musician of the same name, who claimed to have sold his soul to the devil at a crossroads in exchange for his mastery of the guitar. – Source

12. On the British series The Nightly Show, musician John Legend sang some of chef Gordon Ramsay’s greatest insults, including “How the f*ck did you burn ice cream?” and “You put so much oil in this, the U.S. wanted to invade the f*cking plate.” – Source

13. In 2015, 1000 musicians played ‘learn to fly’ by foo fighters together in the town of Cesena, Italy in an effort to get the band to come to their town and play. The band responded and came to the town to play a 27-song-set, starting off with ‘learn to fly’. – Source

14. Daryl Davis, a black musician, was able to interview and even befriend many Ku Klux Klan members, and was able to get some of them to leave the Klan. – Source

15. In 1998, musician David Bowie launched a dial-up Internet Service Provider known as “BowieNet”, which came with its own email and exclusive content. The service lasted till 2006. – Source

16. Musician Billy Squier effectively derailed his career by releasing a video for the song ‘Rock Me Tonite’ that had him dancing around in a pink shirt. – Source

17. Michael Jackson composed songs despite not playing any instruments. He would build each element of a track with his voice, so pitch perfect that studio musicians could match chords to his singing. – Source

18. The UK Parliament has a cross-party rock band consisting of 4 MPs called “MP4” and were the first musicians to perform in the 900-year-old Westminster Hall. – Source

19. Jimi Hendrix and James Brown were both backing musicians for Little Richard early in their careers. When Richard couldn’t make some shows because of a scheduling conflict, James Brown would fill in by impersonating Richard. – Source

20. After the death of musician Gram Parsons, his manager and assistant stole his body from an airport and an unsuspecting patrolman helped them load it into a hearse. They then took the body to Joshua Tree National Park, covered it with gasoline, and set it on fire. – Source

August 10, 2017
Latest Posts
Subscribe to Blog via Email
Did you know?
Loading...
Facts of the Day
Registration is disabled.