1. Annie Taylor was the first person to successfully descend Niagara Falls. She used a custom barrel stuffed with a mattress. She tested it by sending a cat over the falls. It survived and 2 days later she made the journey on her 63rd birthday. – Source

2. In 1969, the Army Corps of Engineers accomplished an awesome feat: They turned off Niagara Falls. They did it to clean up the area and check for structural integrity. – Source

3. There are 30 foot wide abandoned tunnels behind Niagara Falls. – Source

4. The winter of 1848 was so cold that Niagara Falls completely froze over – Source

6. The second man to go over Niagara Falls in a barrel, Bobby Leach, survived the fall but later died as a result of slipping on a piece of orange peel. – Source

7. Nik Wallenda crosses over Niagara Falls on a tightrope and was required to submit his passport to border agents upon arrival. – Source

8. The first man to die going over Niagara Falls in a barrel used an anvil as ballast. His arm was the only part of him they ever found. – Source

9. A man attempted suicide by jumping off Niagara Falls but failed and becomes one of 3 to ever survive the falls without a safety device. – Source

10. In 1990 a man named Jessie Sharp paddled over the Niagara Falls in a kayak. He intended to paddle on after the fall to a restaurant downstream where he’d made dinner reservations. He didn’t wear a life jacket in case it impeded an escape. His body was never found. – Source 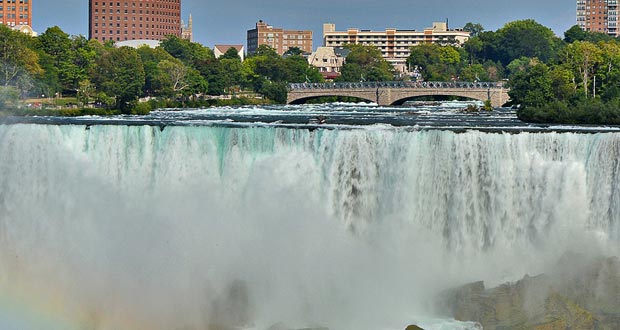 11. Niagara Falls businesses charge a tourism fee, but it is “voluntary” – if you ask, they are supposed to remove it. – Source

12. Niagara Falls earned the nickname “Viagra Falls” when the drug was released in the US months before Canada, leading to Canadian men flocking to the city to fill their prescriptions. – Source

13. The Niagara River creates so much erosion that within 50,000 years Niagra Falls will cease to exist. It’s this sediment that gives the falls the green water they are famous for. – Source

14. Before picking Orlando as the home of his second theme park, Walt Disney seriously considered building Disney World in Niagara Falls. He ultimately rejected it because of the weather. – Source

15. In 1859 Charles Blondin was the first person to tightrope walk across Niagara Falls. He pushed a wheelbarrow containing a small stove and proceeded to cook an omelet midway across. – Source

17. There’s a live Webcam of Niagara Falls, and that watching it and listening to it is quite relaxing. – Source