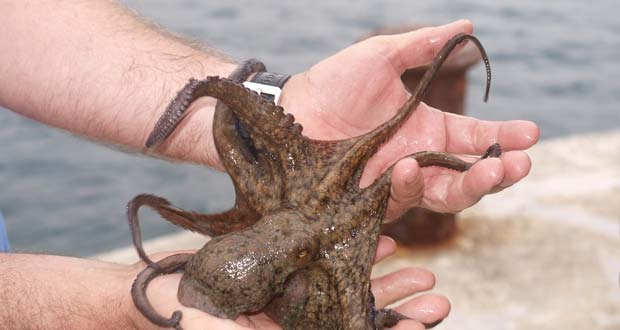 1. Due to the high intelligence of the octopus, the U.K. has considered it an honorary vertebrate for the sake of animal cruelty laws and it is illegal in many countries to perform surgical procedures on an octopus without anesthesia. – Source

2. An octopus escaped from its tank at a New Zealand aquarium, crawled across the floor and into a pipe that led to the ocean. – Source

3. Scientists didn’t discover a single male Blanket octopus until 2002 because they were looking at the wrong magnitude. Females can be up to 40,000 times more massive than males; the largest gender size discrepancy in the animal kingdom. – Source

4. Despite the miraculous color changes Octopus undergo, they are color blind. – Source

5. A baby octopus is about the size of a flea when it is born. – Source

6. Paul the Octopus was so precise in his predictions during the 2010 FIFA World Cup that he received death threats from German fans and had to be offered state protection. – Source

7. According to the Hawaiian creation myth, our universe comes from the wreckage of another, earlier universe and the only creatures that survived from that alien universe are Octopuses. – Source

8. There is an Octopus species that cares for her eggs for 53 months, apparently not eating during this time, then dies. This brooding period is the longest known for any animal. – Source

9. The mimic octopus can change into more than 15 different shapes, including snake, stingray, lionfish, and furry turkey. – Source

10. Octopus eyes do not have a blind spot and evolved separately from vertebrate eyes an example of convergent evolution. – Source

11. There is a species of Octopus known to float on the ocean surface and latch onto Jellyfish while slowly consuming them. – Source

12. Female Octopuses practice sexual cannibalism, and that they strangle their mates with their arms. – Source

13. Severed Octopus tentacles will still function as normal for up to an hour after being cut off, even going as far as to search for food and bring it back to a “phantom mouth”. – Source

15. Octopus wrestling was a 60’s sport which involved diving into shallow water and fighting an Octopus back to the surface. The 1963 record was a 57-pounder. – Source 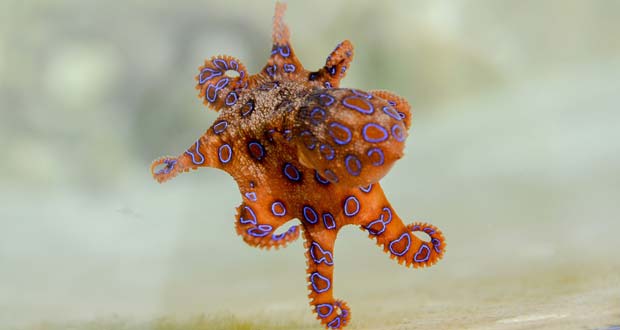 16.  The blue-ringed octopus, which despite being only 5-8 inches in size, carries enough venom to kill 26 humans within minutes. The bites are tiny and painless, with some victims not aware they were bit until paralysis sets in. – Source

17. A scientist had to name an Octopus species. She thought it was “just so cute” she considered Opisthatoothus ADORABILis – Source

18. There is an octopus that carries around a coconut so that it can use it as instant shelter. – Source

19. The plural of octopus is ‘octopuses’ or ‘octopodes.’ The word ‘octopi’ is actually incorrect. – Source

20. A 600lb Octopus can fit through a passageway the size of a quarter. – Source

21. An Octopus is capable of killing a shark. – Source