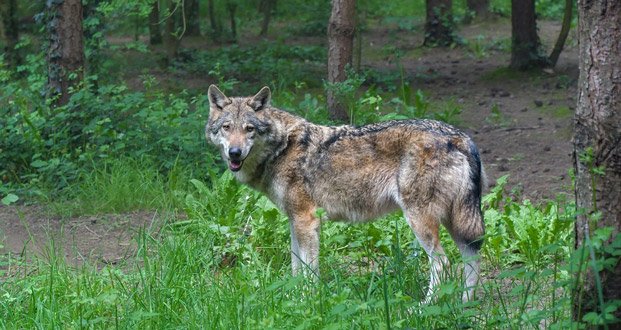 26. There’s a park in Ontario where you can go howl at the eastern grey wolf and have them howl back. – Source

29. Webers, a restaurant on an Ontario highway, was so popular that travellers risked death running across the highway and climbing over the median for its burgers. The owner bought a Toronto footbridge and moved it over the highway to prevent injury. – Source

30. In 1958, 10 communities in Ontario, Canada was flooded in the creation of the Saint Lawrence Seaway. – Source

31. Richmond Hill, Ontario banned the use of the number 4 for new street numbers due to some Asian culture’s fear of the number (it’s a homophone for death). – Source

32. In Ontario, Canada, a dealership is only required to disclose collision or incident damage to a vehicle that was greater than $3,000. This includes brand new vehicles. – Source

33. Importing wine into Ontario, Canada comes with a 102% LCBO levy. You end up paying more than double. – Source

34. In Ontario, you’re allowed to drive a Porsche 918 supercar in the carpool lane even when you’re alone because it’s considered a “green vehicle”. You even get a $5500 incentive for buying one. – Source

35. The first ever NBA game was actually held in Toronto, Ontario, Canada. – Source

36. Cockburn Island is a municipality in Ontario with an official population of zero. It is the least populated incorporated municipality in Canada and has no ferry, bridge connections to either other islands or the mainland. – Source

37. There is an organ donor waiting list published in Ontario and shows how many people are currently waiting for certain organs. – Source

38. A town in Ontario, Almonte, is the only town in Canada to be named after a Mexican general. – Source

40. There is a Chinese-themed shopping centre called “Splendid China Mall” in Scarborough, Ontario. Local sign bylaws limit the size business may post signs in one singular language so permission had to be sought to add English due to its large Chinese sign. – Source