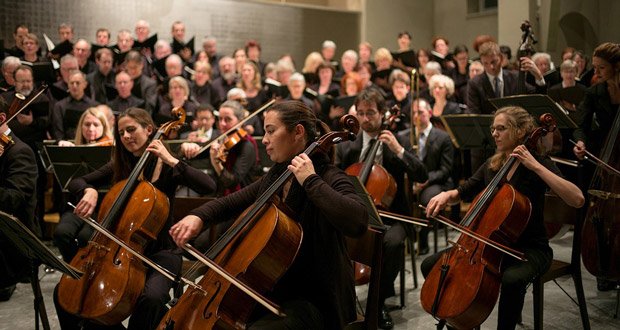 1. The Trans-Siberian Orchestra has donated over $10,000,000 to charity since they started touring. – Source

3. No symphony orchestra can ever make a profit on its own, even if it sold out tickets at every show. This is mainly because the show consists of 40-100 fully salaried members who only perform the same piece 2 or 3 times. Most orchestras rely heavily on donators to be profitable. – Source

4. In order to eliminate gender bias, many orchestras use blind auditions in which the candidates play their instrument behind a screen. – Source

5. During the 20s there was an orchestra in the Soviet Union that was led by a committee instead of a conductor because the idea of a conductor was against Marxist ideals. – Source

6. There is an orchestra which uses instruments made entirely from vegetables, after the show they use the vegetables to make soup. – Source

7. Beethoven actually intended many of his most famous pieces (including the 5th Symphony) to be played much faster than they are generally always played. So fast, in fact, that many professional orchestras are unable to successfully play them. – Source

8. There was a Dutch orchestra that used cars as well as instruments to perform. – Source

9. In Auschwitz, the SS forced an orchestra to play for Jews that had been selected for gassing. The musicians also had among the highest suicide rates of anyone in the camp. – Source

10. Mozart once conducted an orchestra, at the demands of the crowd, after standing during the performance and shouting that the orchestra had played a wrong note. – Source

11. At the end of the premiere of his Ninth Symphony, Beethoven continued conducting to a silent orchestra whilst the audience applauded. His near total deafness meant he was several measures behind and had to be stopped and physically turned around to accept his 5 standing ovations. – Source

12. There is no such thing as a “triangle player” in an orchestra. The guy playing the triangle is called a percussionist, and must master at least 35 different instruments. – Source

13. When Giacomo Puccini died, an orchestra that was playing La bohème in Rome immediately stopped when they heard the news. They played Chopin’s Funeral March instead. – Source

14. During the Siege of Leningrad, the Leningrad Symphony Orchestra played Tchaikovsky’s 5th at a performance to boost morale. During the 2nd Movement, bombs started to fall nearby. The orchestra never stopped playing and continued to the last note. – Source

15. A survey of the largest symphony orchestras in the U.S. revealed 27% of musicians had used a common heart medication called a beta blocker to inhibit stage fright, and 70% of those who had used the drug had obtained it from a friend and not a medical doctor. – Source

16. The orchestra on the Titanic played music while the ship was sinking. They were trying as hard as they could to give peace to the passengers and crew that were stuck on the ship as it descended into the cold icy waters of the North Atlantic Ocean. The act later was recognized as heroic. – Source

17. There’s a very poor village in Paraguay that has turned items found in the dump into instruments for their youth orchestra. – Source

18. A group of musicians successfully fooled the Hong Kong government into thinking they were the Moscow Philharmonic Orchestra long enough to play to over 10,000 people while the real MPO were touring in Europe. – Source

19. There is a youth orchestra called the West-Eastern Divan Orchestra made up of top Israeli and Palestinian musicians to promote peace in the Middle East. – Source

20. Georg Solti, a Hungarian-British conductor who conducted the Chicago Symphony Orchestra for twenty-two years has won a total of 31 Grammy Awards out of 74 nominations. The most Grammy wins out of anyone. – Source

21. 200 years ago, orchestras have tuned a half-step lower than today, and in 1859, the French government passed a law to attempt to standardize pitch levels. – Source

22. In the 70s, an orchestra was formed in England where players had to either be non-musicians or play an unfamiliar instrument. – Source

23. The BBC Symphony Orchestra gave an orchestral performance of John Cage’s “4’33”. The performance was broadcast live on BBC Radio 3, and the station’s emergency backup systems had to be shut off in order to ensure silence. – Source

24. In 2008, Google commissioned composer Tan Dun to compose Internet Symphony No. 1 “Eroica”. This work used the internet to recruit orchestra members and the final result was compiled into a mashup video, which premiered worldwide on YouTube. – Source

25. There is a group called the “Boston Typewriter Orchestra” that performs music exclusively with typewriters. – Source

AskReaders: What is the most interesting documentary you've ever watched?

February 23, 2018
Latest Posts
Subscribe to Blog via Email
Did you know?
Loading...
Facts of the Day
Registration is disabled.