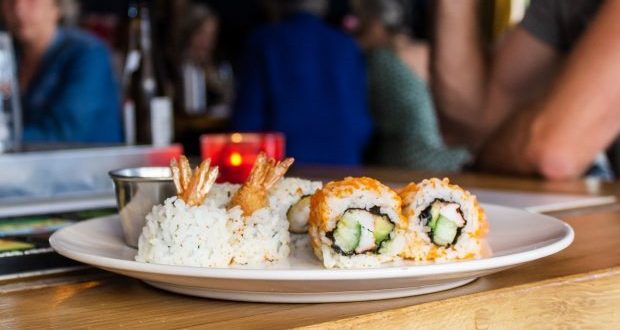 Sushi: delicious slices of fresh, raw fish occasionally wrapped in rice and umami sheets of nori. Sometimes the fish is eaten on its own, lightly dipped in soy sauce, adding a salty tang to the natural delicate and fatty flavors of the fish.

It can also be served overpressed, vinegared rice for extra body and flavor. For sushi lovers, one is well-aware of the utter satisfaction this traditional Japanese dish can bring. The bright colors arranged artfully on the plate by sushi masters is a treat in itself. It is a wonderful date night food, a great step into adventurous eating, and quite nutritious to boot!

The Japanese have been eating sushi as early as the 9th century, but it wasn’t until much later that it hit the shores of America and was literally turned inside out in the form of the California Roll.

The Start of American Sushi

Despite its popularity in the United States, sushi has only been around mainstream restaurant circuits in the U.S. since the 1960s. The restaurant that put sushi on the map was Kawafuku Restaurant in Los Angeles, CA. The first floor served dishes like tempura and teriyaki while the second floor served as the sushi bar, serving traditional sashimi and nigiri.

No, rolls like the Philadelphia roll, which is filled with cream cheese, are not traditional.

What could be called “American sushi” didn’t start to make its appearance until the 1970s. The creation of the now-popular and well-known California roll can be hailed as the start of our sushi roll mania.

The California roll is a beginner roll, usually what is suggested for first-time sushi eaters. This is because its ingredients are accessible to Western palates. It is now served with crab stick (or imitation crab), avocado, occasionally cucumber, and wrapped in rice and nori.

It also has controversial origins, but this is the most wide-spread story.

The California Roll made its debut in the 1970s in a Los Angeles restaurant, proving that necessity is the mother of invention. Sushi chef Ichiro Mashita needed a sufficient substitute for seasonal tuna used in one of his maki rolls. Between real crab meat and avocado, he felt he could reproduce both the mouthfeel and fishy, oily flavor of tuna.

The only thing that wasn’t quite right at first was the nori placement. A maki roll has the nori sheet, also known as seaweed, wrapped around the outside of the roll. It holds everything in. This gives the roll a good crunch and sea-salty flavor. However, American customers didn’t care for the seaweed forward presentation. Mashita put the nori on the inside of the rice instead. Voila! The California roll is born!

What Does Canada Have to Do With the California Roll?

There is another sushi chef who claims to have invented the California roll in 1974, but not in any LA-based restaurant. He says he invented the roll in Canada.

Japan-born Hidekazu Tojo moved to Vancouver, Canada in the 70s and currently owns Tojo’s Restaurant. He apparently named the roll in homage to his many customers who visited Vancouver from the LA area. The use of avocado also informs the name of the roll.

Tojo’s story brings him to Mareki, a Vancouver restaurant, in 1971. He explains in an interview with The Globe and Mail that the fish available to him was not particularly fresh. He also realized that people didn’t care for traditional sushi, in other words, the raw fish and the taste of the seaweed.

This led him to find alternative ingredients and turn the sushi roll “inside out.” It was a hit.

The California Roll May Be Sushi, But It’s Not “Traditional”

The California Roll was developed by an American-based Japanese-born sushi chef in order to appeal to American consumers. Inventor aside, that is the undisputed origin of the roll. It may be one of the most delicious rolls on a sushi menu and an easy step into the sushi world, but it is certainly not traditional-style sushi.

Like all cuisine subsets, sushi transforms. American Sushi has produced quite the array of delicious sauces, fillings (although I question cream cheese every time I see it), and toppings. But once you’re comfortable enough, have a go at some sashimi or nigiri. Being able to appreciate the flavors of the fish for the fish itself is a delightful experience.

June 12, 2020
Latest Posts
Subscribe to Blog via Email
Did you know?
Loading...
Facts of the Day
Registration is disabled.