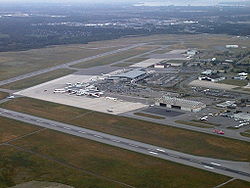 1. During the opening ceremony of Ottawa International Airport’s new terminal in 1959, a USAF F-104 Starfighter did a supersonic flypast. The resulting sonic boom shattered nearly all the glass in the airport and caused significant structural damage, delaying the opening for another year. – Source

2. The Dutch royal family took refuge in Canada during WWII occupation, upon the birth of Princess Margriet, the Ottawa maternity ward was temporarily declared to be Dutch territory by the Canadian government. Since then every year the Dutch people send Canada thousands of tulips in appreciation. – Source

4. Canada had a stray cat sanctuary beside the parliament buildings in Ottawa. The Canadian Parliamentary Cats attracted up to 300 visitors a day before shutting down in 2013. – Source

6. The Currency Museum in Ottawa used to contain over 100,000 currency-related artifacts from around the world until it closed and reopened as Bank of Canada museum in 2017. Currently most of it is in storage and is not available to visitors. – Source

8. Ottawa, Canada currently holds the world record for largest group hug, consisting of 10,554 people at an event called “Electric Forest” back in 2010. – Source

9. A Canadian truck driver was suspected of being a terrorist for having a government-issued visitors’ map of Ottawa while being Arab. – Source

10. The University of Ottawa found that a real-life zombie apocalypse “is likely to lead to the collapse of civilization.” – Source

11. Ottawa has a hostel that used to be a jail until 1972. Hostelling International purchased and converted the building, but left much of the structure intact, allowing guests to experience spending a night “in jail” and the top floor served as death row. – Source

12. Every year, Ottawa uses 500kg of dynamite to blow up the ice on the Rideau Canal. – Source

14. The University of Ottawa has begun clinical trials in treating depression with Ketamine, as it’s been shown to immediately alleviate symptoms for several days. – Source

15. Barnett Newman’s 1967 painting “Voice of Fire” is now worth 50 million USD. It was purchased by the National Art Gallery of Canada where it still hangs in Ottawa. The painting was commissioned for the Montreal Expo 67. The Art gallery purchased it for 1.76 Million CAD in 1990. – Source

16. There is a house in Ottawa that was home to two Canadian prime ministers and hosted many foreign dignitaries like Roosevelt and Churchill. It was briefly considered for permanent official residence of the prime minister. – Source

17. There’s a small township in the vicinity of Ottawa, Ontario, Canada which is spectacularly named Bastard Township. – Source