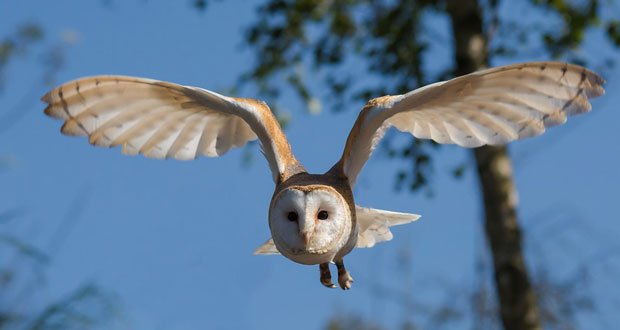 1. Owls make almost no noise from flying, even when tested in a room with multiple microphones. – Source

2. Owls and crows hate each other and will instinctively attack each other on site, even when they’ve had no previous exposure. – Source

3. Many wineries use barn owls instead of poison for rodent control. – Source

4. The eye color of owls indicates what time of day the owls prefer to be active. – Source

5. Some owls keep blind snakes in their nests as helpful associates, reducing the abundance of nest parasites. – Source

6. The largest member of the “hawk owl” group and the largest owl in Australia is named The Powerful Owl. – Source

7. Owls are weighed wrapped up in blankets like little bird burritos. – Source

8. Owls do not have eyeballs. Rather, they have tubular eyes and are unable to move them. This is the same reason they are able to move their heads 270°. – Source

9. Ook, the owl that played Hedwig, was the first actor cast in Harry Potter and the Sorcerer’s Stone. – Source

10. Barn Owls left ear is higher than their right so they can detect prey on the horizontal and vertical plane. – Source

11. There was a giant owl, surpassing 20 pounds and it was approx. 3 feet tall. –Source

13. There are species of owls that live in holes in the ground- think prairie dog with wings. – Source

14. The Northern white-faced owl is the owl whose unique fight-or-flight response makes it appear larger when confronting a slightly larger owl, and smaller when facing a much larger adversary. – Source

15. According to Pliny the Elder (AD 23 – AD 79), owl eggs were commonly used as a hangover cure. In pre-modern times, owls also had a strong association with ill-fortune and evil portents, in contrast with the more modern association with wisdom. – Source

16. A group of owls is called a parliament. – Source