1. In order to popularize potatoes in France, Antoine-Augustin Parmentier placed armed guards around his potato fields, instructing the guards to accept all bribes and allow people to “steal” the crop. – Source

2. Potatoes have almost all nutrients humans need to survive. To prove this, the Executive Director of the Washington State Potato Commission ate nothing but potatoes for 60 days. – Source

3. If a potato is exposed to light while growing, it will turn green and become poisonous. – Source

4. The potato has been studied by NASA as an important food source for long space voyages, and that the number of potato plants (grown on board a spaceship) needed to sustain one astronaut is also the amount of potato plant required to process the air breathed by one astronaut. – Source

5. It is possible to combine a potato plant and a tomato plant into a “tomtato”, a hybrid that yields both potatoes and tomatoes. – Source 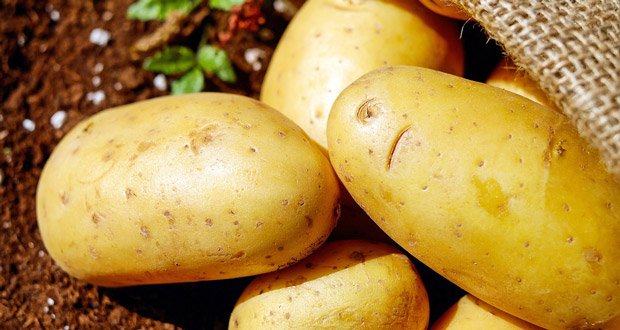 6. China leads the world in potato production with 25% of the world’s total. – Source

7. The introduction of the potato was responsible for a quarter of the population growth in Europe from 1750 to 1900. – Source

8. 2008 was the UN approved International Year of the Potato. – Source

9. The Inca people had a goddess of potatoes. Villages would have one particularly odd-shaped potato that would be worshiped in hopes of a bountiful harvest. – Source

10. There is an American Journal of Potato Research. – Source

12. Potato poisoning can cause paralysis, coma, and hallucinations for days. If left untreated, also death. – Source

13. Potato starch is used in oil drilling. The starch reduces fluid loss in the “drilling mud”, a liquid which is pumped into the hole to clean and cool the drill bit. – Source

14. Potato plants are usually pollinated by insects such as bumblebees. – Source