Quartz is the second most abundant mineral in the Earth’s continental crust, after feldspar. If you feel like you ain’t got time for this basic rock crystal, then you need to step back and re-evaluate your life choices. It’s chemical formula is SiO2.You think you know silicon dioxide? We’ll see. 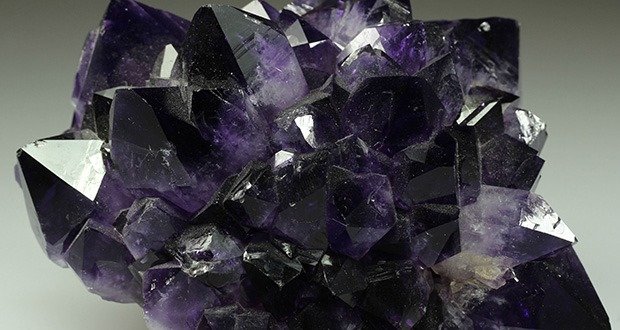 So yeah, it does come in multiple different color varieties like this Amethyst here. But that doesn’t even come close to scratching the surface of Quartz, which by the way, you would need something of a 7 or harder on the mohs scale to actually do. Amethyst is a popular form of quartz that ranges from a bright to dark or dull purple color. The world’s largest deposits of amethysts can be found in Brazil, Mexico, Uruguay, Russia, France, Namibia and Morocco. Amethyst variety of quartz often used in jewelry. The ancient Greeks wore amethyst and made drinking vessels decorated with it in the belief that it would prevent intoxication. 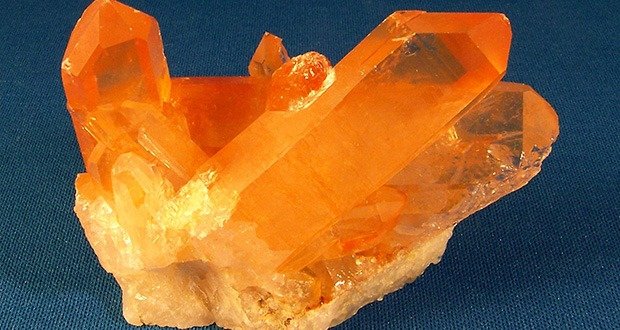 There’s two basic genres of quartz, based on it’s internal crystal structure. Macrocrystalline, would be the first. It is formed by adding more and more molecules to the surface of a crystal in layers. Like this citrine right here, which is actually very rare to find naturally occurring in this particular shade of Tang. The color of citrine variety of quartz ranges from a pale yellow to brown due to ferric impurities. It is nearly impossible to tell cut citrine from yellow topaz visually, but they differ in hardness. Brazil is the leading producer of citrine.

This is Ametrine. Fancy dual color shennanigans going on here. Amethyst and citrine are virtually the same: quartz with iron or manganese impurities. Heat causes amethyst to turn yellow/orange. Unfortunately most any kind of ametrine or citrine you’ll find on the market has been heat treated and filled with lies. It also comes in green, which would be called Prasiolite. Legend has it that ametrine was first introduced to Europe by a conquistador’s gifts to the Spanish Queen, after he received a mine in Bolivia as a dowry when he married a princess from the native Ayoreos tribe.

Most ametrine in the low price segment can be assumed to stem from synthetic material. Since 1994, a Russian laboratory has perfected the industrial production of bicolored quartz crystals that are later irradiated to bring out the typical ametrine colors. Green-yellow or golden-blue ametrine does not exist naturally. 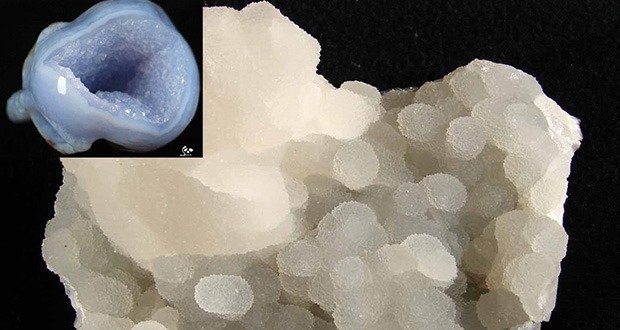 This Chalcedony demonstrates the second main type of quartz, Cryptocrystalline, which is formed in basically a liquified silica solution. Mostly you’ll see it polished since its all milky and swirly. This kind of quartz forms in areas with volcanic activity where waters, rich in dissolved silica (SiO2), flow through fractures and cavities in igneous rocks. Chalcedony has a waxy luster, and may be semitransparent or translucent. It can assume a wide range of colors, but those most commonly seen are white to gray, grayish-blue or a shade of brown ranging from pale to nearly black. 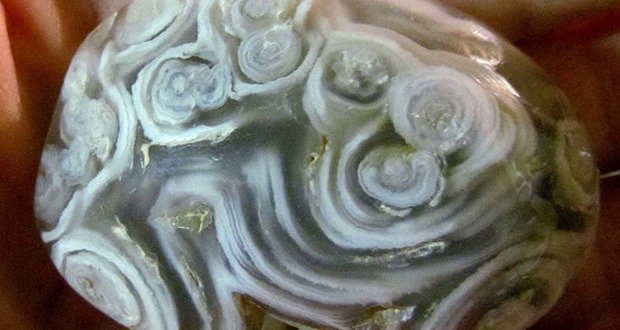 Agate is a type of Chalcedony. It is characterized by either transparency or color patterns, such as multi-colored curved or angular banding. Opaque varieties are sometimes also referred to as Jasper. Agate tends to be hollow in the middle, and when combined with chalcedony and the regular macrocrystalline varieties of quartz, a magical thing happens. The best thing… 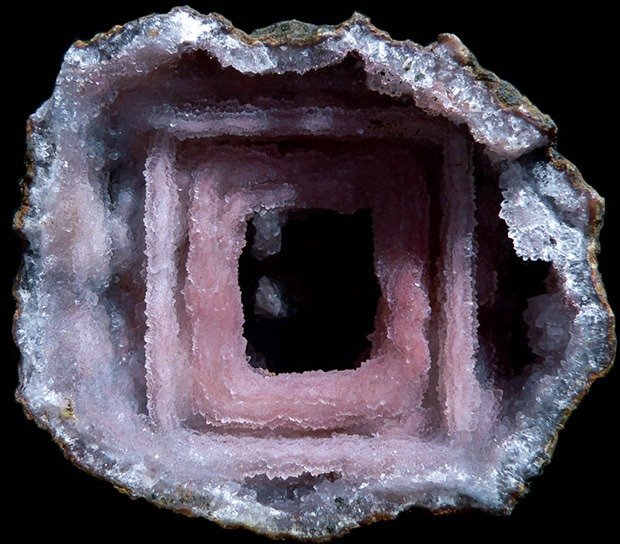 Geodes! Geodes are brilliant. Look at this rogue geode. It is squarish in the middle. Geodes can form in any cavity. They can form in gas bubbles in igneous rocks, such as vesicles in basaltic lavas; or, as in the American Midwest, in rounded cavities in sedimentary formations. After rock around the cavity hardens, dissolved silicates and/or carbonates are deposited on the inside surface. Over time, this slow feed of mineral constituents from groundwater or hydrothermal solutions allows crystals to form inside the hollow chamber. 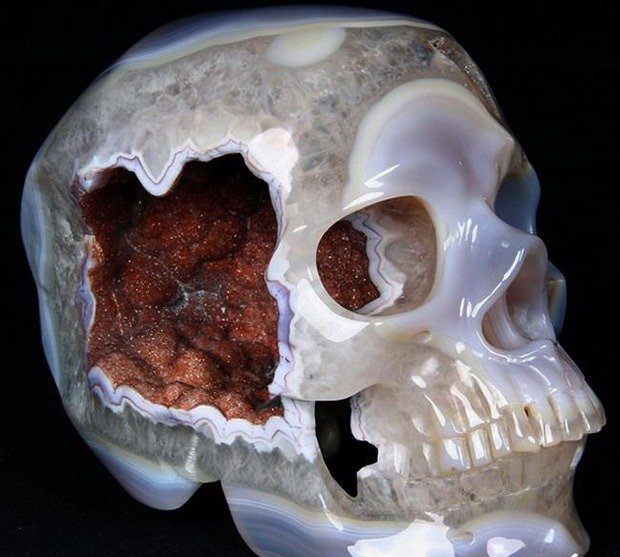 Here is a geode that has been carved into the shape of an human skull. Most geodes contain clear quartz crystals, while others have purple amethyst crystals. Still others can have agate, chalcedony, or jasper banding or crystals. There is no easy way of telling what the inside of a geode holds until it is cut open or broken apart. Geodes are common in some formations in the United States (mainly in Indiana, Iowa, Missouri, Kentucky, and Utah). They also are common in Brazil, Namibia, and Mexico. 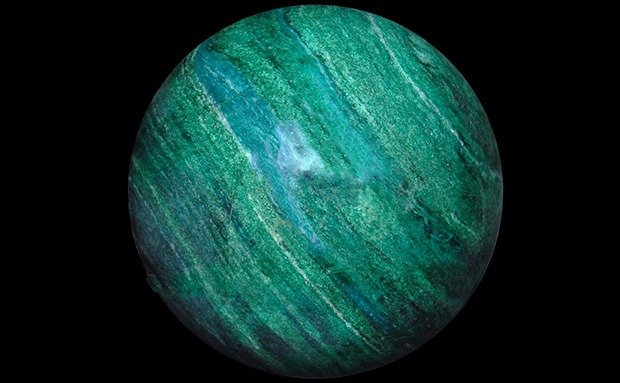 Now I’m basically just going to run through a few other varieties of quartz. There are stones out there that you would probably never even suspect are quartz. This here is Aventurine. It’s green and translucent, but with all kinds of inclusions, like mica (muscovite), which make it shimmery. 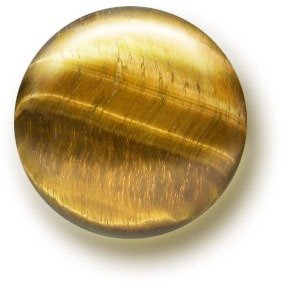 This is the poster child for Chatoyancy. Cat’s Eye. This optical effect is caused by fibrous structures or inclusions, usually rutile. The rutile fibers are all aligned and that iridescent line you see appears perpendicular to them. It moves with you regardless of the angle you’re viewing it at. 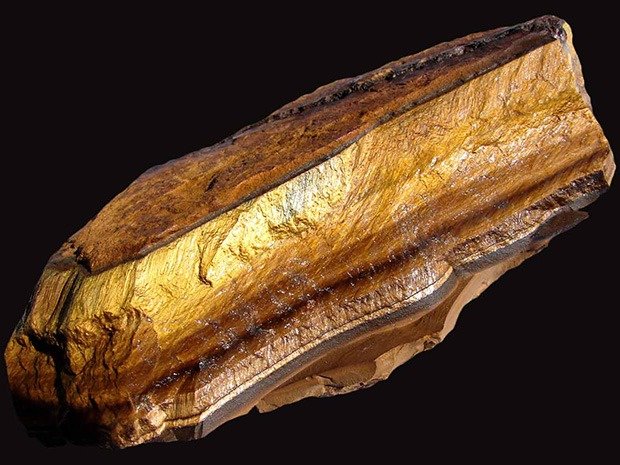 This here is the Tiger’s Eye! Also Chatoyant, but with layers. Tiger’s eye forms when silica and iron oxide replace crocidolite (blue asbestos) in the quartz. That’s called pseudomorphism, when one mineral replaces another, without altering the structure of the formation as a whole. Hawk’s eye is what you get when the crocidolite fibers are still present in the quartz. Artificial fibre optic glass is a common imitation of tiger’s eye, and is produced in a wide range of colours. Tiger’s Eye comes primarily from South Africa and East Asia. 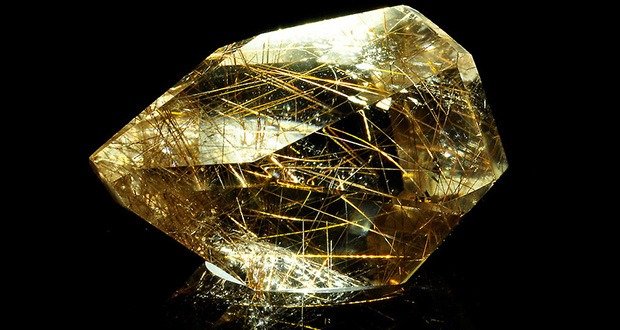 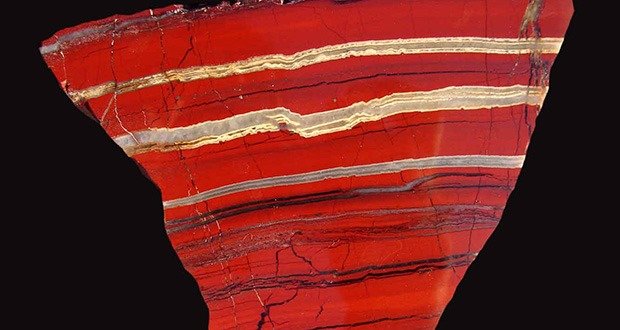 That’s a lot of Red. This is Jasper. It is usually red, yellow, brown or green in color; and rarely blue. The mineral aggregate breaks with a smooth surface and is used for ornamentation or as a gemstone. It can be highly polished and is used for vases, seals, and snuff boxes. 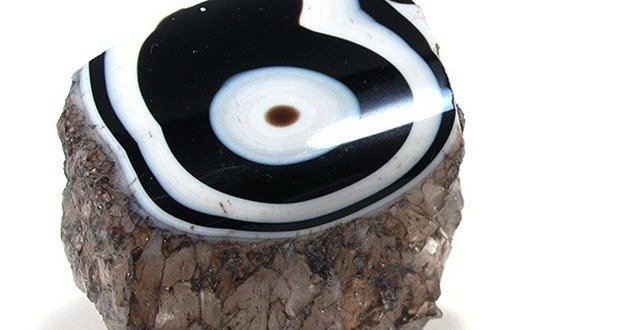 Onyx is a banded variety of Chalcedony. The colors of its bands range from white to almost every color (save some shades, such as purple or blue). Commonly, specimens of onyx contain bands of black and/or white. Onyx is a gemstone found in various regions of the world including Argentina, Australia, Brazil, Canada, China, Czech Republic, Germany, India, Madagascar, the UK, and various states in the US. Onyx is formed in the vesicles of lava. It has a long history of use for hardstone carving and jewellery. 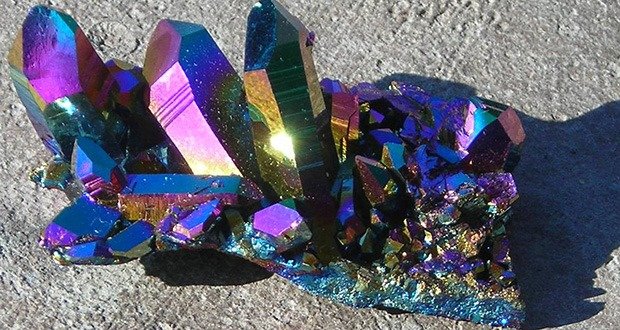 This is called Titanium Quartz, a type of Aqua Aura. It doesn’t form naturally. The process by which you make this is throw a crystal in a vacuum chamber, heat it to 871 °C, then vaporize some metal, and toss that into the mix. The vapors stain the outside of the crystal with iridescent metallic glory. Crystals treated this way are used as gemstones and for other decorative purposes. 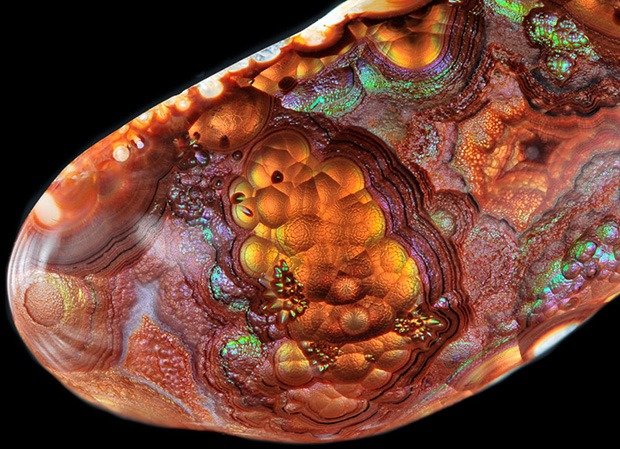 This is Fire Agate. Chalcedony gone wild. This natural gemstone is found only in certain areas of northern Mexico and the southwestern United States. Approximately 24-36 million years ago these areas were subjected to massive volcanic activity during the Tertiary Period. The fire agates were formed during this period of volcanism when hot water, saturated with silica and iron oxide, repeatedly filled cracks and bubbles in the surrounding rock. Fire agates have beautiful iridescent rainbow colors, similar to opal.

The vibrant iridescent rainbow colors found within fire agates is caused by the alternating silica and iron oxide layers which diffract and allow light to pass and form interference of colors known as fire. There is no actual object inside the stone, this special effect arises from light interference within the microstructure layering of the gem.