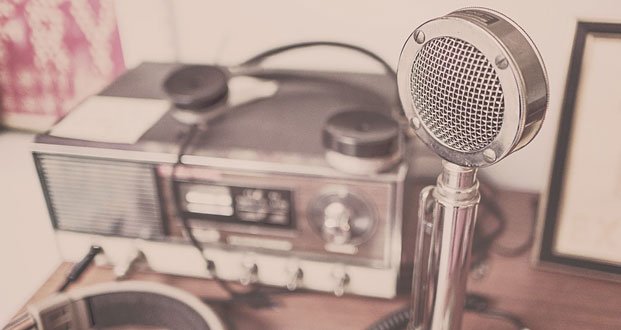 1. The most powerful commercial radio station ever was WLW (700KHz AM), which during certain times in the 1930s broadcasted 500kW radiated power. At night, it covered half the globe. Neighbors within the vicinity of the transmitter heard the audio in their pots, pans, and mattresses. – Source

2. 13-year-old called out the Eastern State Penitentiary for having the wrong radio on display in a recreation of Al Capone’s cell. The radio wasn’t available until 1942 and Capone was imprisoned from 1929-1930, resulting in the museum replacing it and giving the teen the inaccurate radio. – Source

3. Back in the 1980’s people were able to download Video Games from a radio broadcast by recording the sounds onto a cassette tape that they could then play on their computers. – Source

4. In WWII, weather reports were censored to prevent enemy submarines from learning about conditions. A football game in Chicago was so covered in fog that the radio announcer couldn’t see the field, but afterward he was officially thanked for never using the word “fog” or mentioning the weather. – Source

5. In 2005, a radio polled 3500 music fans to make the “Rock’s Ultimate Super Group”, where they could choose the best musician of all time at each instrument. They ended up making Led Zeppelin. – Source

6. Most of the radio broadcasts that Robin Williams delivered in the movie “Good Morning Vietnam” were improvised by him. – Source

7. On the 28th of September 2006, The City Council of Reykjavik and neighboring municipalities agreed to turn off all the city lights in the capital area for half an hour, while a renowned astronomer talked about the stars and the constellations on national radio. – Source

8. In 1978, a radio station accidentally played “Imaginary Lover” by the Atlanta Rhythm Section at the wrong RPM, causing it to sound just like Stevie Nicks. Stevie Nicks eventually heard about it and played the record at the increased speed for bandmates, who all believed it was her singing. – Source

9. The first time the Japanese people heard the Emperor’s voice on the radio was when he announced Japan’s surrender in WWII. – Source

10. Rockstar allowed fans in 2007 to call a number to rant about what they think was wrong with America. The best ones were a feature on the radio station WKTT in GTA IV. – Source

11. The number one most played song on U.S. radio of the 2000s decade was “How You Remind Me” by Nickelback. It was played on the radio over 1.2 million times. – Source

12. The 1946 “Adventures of Superman” radio show revealed the “secret” codes and rituals of the KKK, making it a laughing stock and drying up Klan recruitment almost overnight. – Source

13. The Eiffel Tower was supposed to be scrapped after 20 years. It only survived because the military started using it as a radio tower, intercepting crucial military transmissions during WWI. – Source

14. The “hysteria” created by Orson Welles’ “War Of The Worlds” was a myth created by newspapers to instill fear over the power of broadcast radio. – Source

15. UVB-76 is a mysterious Russian radio signal that has been transmitting continuously since 1982. Nobody knows who makes the signal, only that it is located near Moscow, makes a buzzing sound 25 times a minute, and every few years will broadcast a string of random names and numbers. – Source

16. One of the checks which a British nuclear submarine makes to see whether the government is still functioning is whether BBC Radio 4 is broadcasting. – Source

17. When cowboy/actor Slim Pickens (Blazing Saddles/Dr. Strangelove) joined the military during WWII he stated his profession was “rodeo”, the recruiter heard “radio” and Slim spent the entire war as a radio operator. – Source

18. A muppet obsessed fan once took a radio manager hostage, claiming that he had a bomb, and demanded that the rainbow connection song be played continuously for the next 12 hours on the radio. – Source

19. The first instance of Telephone hold music was a mistake that was caused by a loose piece of wire touching a metal girder at a factory. It turned the building into a giant radio antenna that would play music from a next-door radio station when people were put on hold. – Source

20. Radio GTMO, the Armed Forces radio station at Guantanamo Bay, Cuba, has a vinyl collection of over 20,000 records, including some albums that exist nowhere else. – Source

21. Robert Plant once donated $10,000 to KBOO, a non-profit community radio station in Portland Oregon, to never play “Stairway to Heaven” ever again. – Source

22. Shortly after the 9/11 terrorist attacks, a memo was distributed to radio stations with a list of songs deemed “lyrically inappropriate”; the list contained 165 suggestions with one reading “Every Rage Against the Machine Song”. – Source

23. During a critical moment in the Apollo 13 mission, the Soviet Union discontinued radio transmissions in the frequency bands used by Apollo to prevent radio interference. – Source

24. The Armed Forces of Colombia commissioned a pop song that included a Morse code message to kidnapped military personnel, “19 people rescued, you’re next. Don’t lose hope”, because the kidnappers would let their captives listen to the radio. – Source

25. Massive amounts of birds are killed each year by radio antennas. And that changing the static red light to a blinking light can cut the death toll by up to 70%. – Source

July 21, 2018
Latest Posts
Subscribe to Blog via Email
Did you know?
Loading...
Facts of the Day
Registration is disabled.