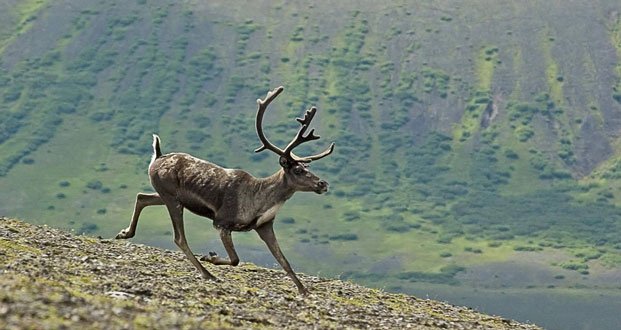 1. Reindeer are one of the only mammals that can see UV light, allowing them to see lichen, polar bears against the snow, and urine trails. – Source

2. Caribou is simply the North American name for reindeer. – Source

3. Reindeer are unable to walk and pee at the same time, so they have to take a bathroom break roughly every 6 miles. The distance between stops is so regular that in Finnish, this distance is known as “poronkusema” or “reindeer’s piss” and was a description of distances in the countryside. – Source

4. Reindeer herders in Finland are painting their reindeer’s antlers with reflective paint to cut down on deer-car collisions. – Source

5. Reindeer aren’t native to Alaska. Sheldon Jackson purchased them from Siberia to help with the food shortages in the late 1800s. He brought in 16 and by the late 1930s, there were 640,000. – Source 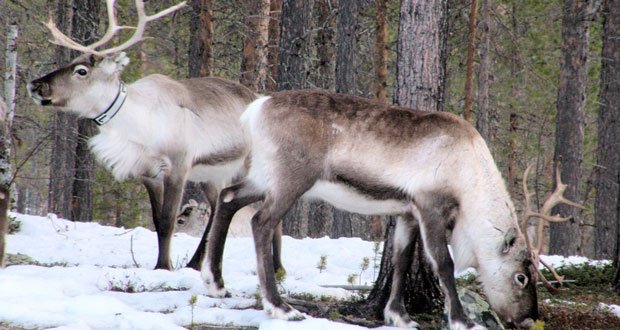 6. Eyes of Arctic reindeer change color through the seasons from gold to blue. – Source

7. 323 reindeer were killed in a single lightning storm in Norway. Reindeer huddle together in bad weather and their close proximity explains why so many were killed at once. – Source

8. All of Santa’s reindeer were female because only female reindeer keep their antlers in December. – Source

9. Some reindeer really do have red noses, a result of densely packed blood vessels near the skin’s surface. – Source

10. During WWII a fully grown reindeer lived on a British submarine, ate a navigation chart and got so fat that it couldn’t get back out. – Source

11. There’s a soft drink in Sweden that is made with reindeer blood. – Source

12. Reindeer are associated with having bells on their harnesses because migrating ethnic Sámi or Alpine herders used the sound to follow each other’s sledges in a caravan after daylight ended. – Source

13. Reindeer love to eat psychedelic mushrooms may get high off of them, and that this could be the origin of the flying reindeer myth. – Source

14. Reindeer were among the first animals domesticated by humans. – Source

15. The traditional method of castrating a reindeer is to bite its testicles. – Source

16. In 2005, the Italian Prime Minister, Berlusconi, insulted Finnish cuisine and joked that Finns ate “marinated reindeer”. In 2008, Finland won an international pizza contest, beating Italy. The name of the winning pizza was “Pizza Berlusconi” which was made of smoked reindeer. – Source

25 Uplifting Headlines of the Week - Part 55