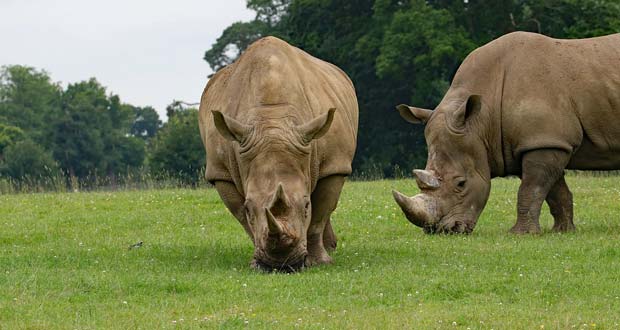 1. Conservationists in South Africa are infusing a special red dye into the horns of live rhinos. The mixture renders the horn completely useless to poachers trying to sell it commercially and is also toxic for human consumption. – Source

2. In 2014 Namibia raised over $350k by auctioning off the right to hunt one endangered black rhino. The rhino was past breeding age and detrimental to the rest of the herd. The money was used to protect endangered animals. – Source

3. Biotech firm Pembient has managed to 3-D print fake rhino horns that are genetically identical knockoffs. The company plans to flood Chinese rhino horn market at one-eighth of the price of the original, undercutting the price poachers can get and forcing them out eventually. – Source

4. Anti-poaching dogs are trained to rappel from a hovering helicopter to tackle rhino poachers. – Source

5. The Australian Rhino Project wants to bring a viable population of Rhinos to Australia to protect them from poachers. – Source

6. There are less than 100 Javan rhinos left in the entire world, and they are all located in one national park. – Source

7. Teddy Roosevelt went on a ‘safari’ after his presidency and killed or trapped over 11,400 animals including 6 white Rhinos. – Source

8. Kenya burned $172 million worth of illegal rhino horn and elephant tusk to demonstrate against poaching in that area. – Source

9. A group of Rhinos is called a “Crash” because they have poor eyesight, so when stampeding at 30 mph they “Crash” into things. – Source

10. The “white rhino’s” name is not actually related to its color, but is a misnomer for its original Dutch name “wijd renoster”, that means “wide rhino” because it is almost twice as big as the black rhino. – Source

11. The Woolly Rhino was a type of rhinoceros with thick, shaggy fur that roamed Europe until around 10,000 years ago. – Source

12. The black rhino has a pointed upper lip, while its white relative has a squared lip. The difference in lip shape is related to the animals’ diets. – Source

14. The memory of the Elasmotherium, an extinct variety of large rhino that lived on the steppe during the Ice Age, might have survived in Russian, Chinese, and other folklore as a type of unicorn. – Source

15. People in Vietnam have started consuming rhino horn as a sexual stimulant after widespread but false Western rumors about what it’s traditionally being used for in Asia have reached the country. – Source 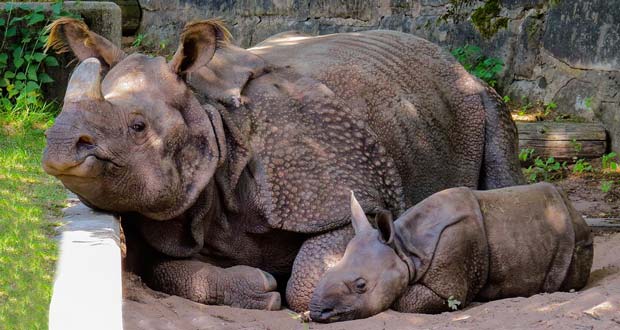 16. It has been suggested that, in order to save rhinos from poachers, a regulated trade which safely and humanely removes the horn from rhinos should be established. – Source

17. There is a cave in Washington that was formed when lava cooled over the corpse of an ancient rhino. – Source

18. Rhinos stamp out the fire when they see it. – Source

19. Discovery marks the finding of the ‘oldest, most primitive woolly rhino.’ Scientists say the remains are 3.7 million years old. – Source

20. The scientific name for the Indian rhino is Rhinoceros unicornis. – Source

21. In 1515, Albrecht Dürer depicted a rhinoceros relying on a letter sent to him. That work was regarded by Westerners as a true representation of a rhino until the late 18th century. Until the late 1930s, the image appeared in school textbooks in Germany as a faithful image of the rhinoceros. – Source

22. In 1958, a rhino won a municipal election in San Paulo, Brazil. Unfortunately, the victory was later declared invalid by the electoral commission. – Source