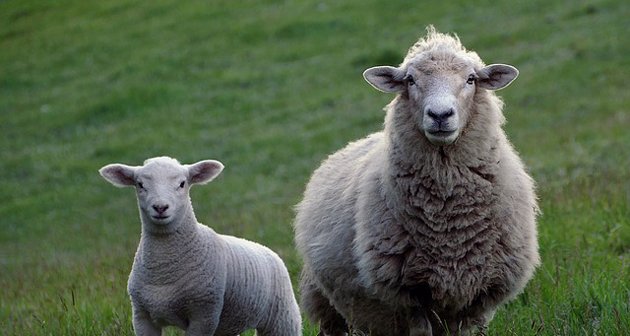 1. Due to human interaction, domestic Sheep have evolved to require humans to shear them. Their wool never sheds. – Source

2. The first ever cloned sheep was named after Dolly Parton because “Dolly is derived from a mammary gland cell, and we couldn’t think of a more impressive pair of glands than Dolly Parton’s.” – Source

3. Sheared sheep don’t recognize each other and fight for a few days to re-establish a hierarchy. – Source

4. In 2005 in Turkey, a sheep committed suicide by jumping off a cliff and more than 1,500 sheep followed the first one. – Source

5. In the Falkland Islands, sheep outnumber humans at a ratio of 350:1. – Source

6. Sheep farming accounts for around 80% of all agriculture in Wales. – Source

7. Approximately 8% of all rams (male sheep) exhibit an exclusive sexual preference for other rams and this preference is linked to a decreased volume of a particular brain region compared to “straight” rams. – Source

8. Sheep breeders put chalk on the male sheep, which leaves a chalk mark on the females it’s mated with to monitor reproduction. – Source

9. Haggis is illegal in the US because one of its key ingredients is sheep lungs. – Source

10. Antivenom is actually obtained by using milked venom from said species and injecting it into a sheep where antibodies are made and harvested from its blood. – Source

11. The North Ronaldsay is a breed of sheep which lives on a beach and eats seaweed. – Source

12. Chris the sheep avoided shearing for years. The fleece was so massive, Chris could barely walk. It took five shearers 42 minutes to remove 89 pounds of wool, which set an (unofficial) world record for most wool. – Source

14. Sheep can remember the faces of up to 50 other sheep as well as their shepherd. – Source

15. During WWI, Woodrow Wilson kept a flock of 48 sheep on the White House lawn to save money on groundskeepers. The sheep also earned $52,823 for the Red Cross through the auction of their wool. – Source

16. ‘Paddywhack’ is the nuchal ligament of sheep and cattle often dried to make a dog treat. – Source

17. The shape of an animal’s eye tells whether it’s hunter or prey, sheep have horizontal pupils so they can better see predators while grazing. – Source

18. More than two dozen animals, including sheep and goats, perished from dehydration and exhaustion during a hiatus in the production of “The Hobbit: An Unexpected Journey, but the film still received the disclaimer “No animals harmed during the making.” – Source

19. In 1968, over 6,000 sheep suddenly died near the Skull Valley Indian Reservation in Utah. It was later revealed that this was due to nerve agent testing by the US Army. – Source

20. The Puya Chilensis plant of Chile entangles sheep with spines on its leaves, starving them to death, and then absorbs nutrients as the animals decompose nearby. – Source

21. In 1783, when the volcanic fissure Laki erupted, the fallout in Iceland caused around 80% of sheep, 50% of cattle and 50% of horses to die as well as killing an estimated 20–25% of the country’s human population while also creating worldwide effects. – Source

22. A woman named Durita wanted to get her homeland, the Faroe Islands on Google Street View, so she started a project to use sheep to get footage of the islands. It’s called “Sheepview 360°.” – Source

23. Sheep are born with long tails, they get cut off to prevent infection. – Source

24. Bighorn Sheep will kick each other in the balls as a challenge to another ram. – Source

25. A plane en route from Australia to Malaysia with a cargo of 2186 sheep had to make an emergency landing in Bali when excess gas from the animals set off smoke indicators. – Source