1. In Nordic mythology, Ratatoskr was a squirrel whose sole job was to carry insulting messages between a great eagle and a dragon at opposite ends of Yggdrasil, the great World Tree. – Source

2. Squirrels will adopt other squirrels babies if they are abandoned. – Source

3. Olney, Illinois is the “White Squirrel Capital of the World;” the squirrels have the right-of-way in traffic, with a $500 fine for hitting one. – Source

5. There is a “Squirrel Whisperer” Student at Penn State University. She has an uncanny ability to attract squirrels and gives them hats and earmuffs to wear. – Source

6. When a squirrel feels it is being watched it may deceptively pretend to bury an object then hide the object in its mouth. – Source

7. Squirrels were voracious pests in colonial America. Bounties were imposed to reduce populations and some colonies even accepted squirrel scalps as payment for taxes. Colonists became such marksmen from shooting squirrels, they later devastated the ranks of British soldiers during the Revolution. – Source

9. Tommy Tucker was a squirrel that wore women’s clothes and performed tricks to sell war bonds in WW2. – Source

10. In order to reduce the number of squirrel pox-carrying gray squirrels, Prince Charles has backed a plan to feed the squirrels oral contraceptives hidden in Nutella. – Source 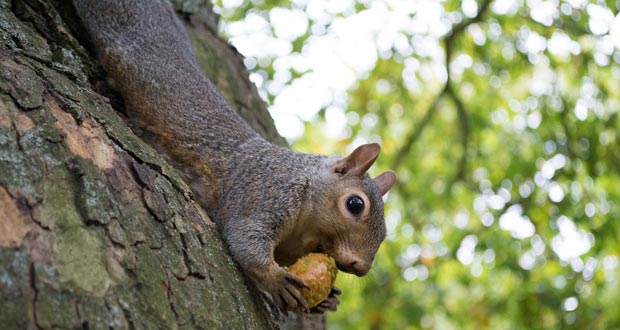 11. Rather than use CGI, Tim Burton had 40 squirrels trained to crack nuts for Charlie & The Chocolate Factory(2005). – Source

12. Adult California ground squirrels have a protein in their blood that allows them to survive rattlesnake bites. – Source

13. Some squirrels make “mushroom jerky”, by picking mushrooms and hanging them to dry on tree branches. This helps preserve them over winter, and also prevents insect larvae from infecting the squirrels’ other food. –Source

14. Baby squirrels will only pee and poop in their mother’s mouth so that the mother can dispose of the waste outside the nest in order to keep predators from smelling the scent. – Source

15. On December 10, 1987, a squirrel chewed through power lines and shut down the Nasdaq for 82 minutes, preventing the trading of approximately 20 million shares. – Source

16. In the UK, if a grey squirrel is trapped, it is illegal to let it go; instead, it should be killed humanely. – Source

17. Squirrels can rotate their ankles 180 degrees, can see peripherally in perfect vision, and greet their nest-mates by nuzzling and ‘kissing’ at the end of the day. – Source

18. It is the tradition in Sri Lanka for children to throw their baby teeth onto the roof of their house in the presence of a squirrel. – Source

19. A groundhog is a type of squirrel. – Source

20. Some Red Squirrels in Ireland and Britain are infected with the bacteria that causes leprosy in humans. – Source

25 Uplifting Headlines of the Week - Part 34