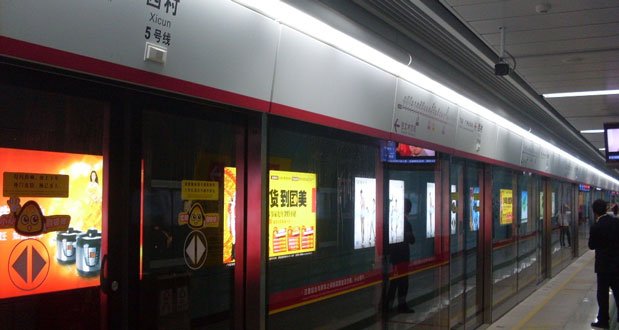 26. The Chinese city of Guangzhou had no subway whatsoever 20 years ago. Today, its subway system has 231 stations and is 191 miles/390 km long. It is today the world’s fourth busiest metro system, beating New York’s, London’s, Moscow’s and Paris’ in terms of ridership. – Source

27. Montreal’s subway trains use brake shoes made from wood soaked in peanut oil. They are quieter and don’t wear out metal wheels as much as more conventional alternatives. – Source

28. The Washington DC subway system has been successfully sued multiple times due to racist practices directed towards non-black employees. – Source

29. The big metal box under subway train cars is full of sand, and that it dumps some sand onto the tracks to help provide better traction for the wheels. – Source

30. There was a working prototype pneumatic tube subway built in New York in 1870 similar (but cruder) to what Elon Musk wants to do. It initially had lots of support but eventually died because of an enormous financial crash. – Source

31. During the division of Berlin, there were still several West Berlin subway lines which passed through parts of East Berlin. They just didn’t stop there, leaving behind heavily guarded “ghost stations”. Over the years, several citizens of the East managed to get on trains towards the West. – Source

32. Toronto subway token fare prices have risen faster than inflation since 1990. While the consumer price index has risen at an annualized rate of 1.8% in Canada, TTC fares have increased at 4.5%. An investment in tokens would have been more profitable than to deposit money in a savings account. – Source

33. Every NYC subway station has a wooden black and white striped “Zebra Board” that conductors must point at every stop to show they are alert and stopped in the proper spot. – Source