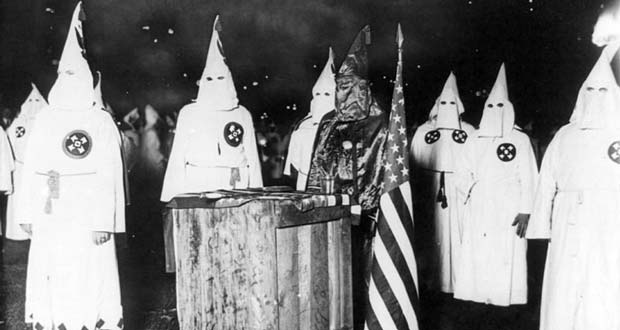 Here are 33 facts about the Ku Klux Klan (KKK).

1. In 1957, the KKK planned to set up a burning cross at a college in Alabama that recently integrated. However, because it was finals week, the students were all in their dorms and heard the KKK outside. The students then attacked the KKK with bats and golf clubs and forced them to retreat. – Source

2. In 1999, 47 black residents of a Texas town were arrested on drug charges solely on the uncorroborated word of one undercover agent who was a member of the KKK. Many were sentenced to long prison terms; some served years before release. For doing this, the officer got 10 years probation. – Source

3. In 1924, the KKK planned to hold a major rally in South Bend to send a message to Notre Dame students. “Instead, the only message delivered that morning came from Notre Dame’s students, who pummeled the Klansmen as they disembarked from their train.” – Source

4. A KKK Grand Dragon, confined to a wheelchair, had been threatening a local rabbi. The rabbi responded by offering the man compassion, friendship, and transportation around town. They became friends and the Grand Dragon eventually quit the KKK and converted to Judaism. – Source

5. The 1946 ‘Adventures of Superman’ radio show revealed the ‘secret’ codes and rituals of the KKK, making it a laughingstock and drying up Klan recruitment almost overnight. – Source

6.  The KKK was denied the permit to Sponsor a segment of Interstate 55 in Missouri; when the federal court declared it unconstitutional and the KKK was given the sponsorship the Missouri Legislature renamed the segment “Rosa Parks Highway”. – Source

7. Muhammad Ali once spoke at a KKK rally where he stated that Nation of Islam, and he himself, also shared their ideas on racial segregation. – Source

8. A Catholic priest was kidnapped and castrated by KKK members, including the Gainesville mayor and police chief, at the University of Florida in 1924. – Source

9. Daryl Davis, a black musician, is credited with dismantling the entire KKK network in Maryland. He did this by befriending many members, even going so far as to serve as a pallbearer at a Klansman’s funeral. – Source

10. In 1996, a black teenager, while marching to protest a KKK rally in Michigan, protected a white man, who had an “SS” tattoo and a confederate flag shirt, from the attacks of a crowd. She threw herself on him to deflect the mob’s strikes, due to her belief that “nobody deserves to be hurt.” – Source

13. Houston’s progressive listener-sponsored radio station “KPFT”, it was the only radio station in the country to have its radio transmitter bombed. It was blown up twice, both times by the Ku Klux Klan. – Source

14. In 1958, The Lumbee Indians of NC learned of a KKK rally being held in the woods nearby. They attacked the KKK rally and broke it up. The Klan was never active in the area again. – Source

15. Mafia capo Gregory Scarpa was recruited by the FBI to find information on the murders of 3 civil rights activists by the KKK using extrajudicial methods. He attained the location of the bodies by pistol whipping a Klansman and putting a gun in his mouth. – Source

16. Newton Knight was a Southern Unionist who formed the Knight Company, a band of Confederate Army deserters in Jones County, Mississippi which fought a guerrilla war against the CSA. After the Civil War, he married a former slave and fought the KKK leading an otherwise all black regiment. – Source

17. Members of the Nazi Party and KKK shot five unarmed protesters to death in NC, in 1979, in broad daylight, while being filmed and all were acquitted in two separate trials. – Source

18. During the Civil Rights Movement, the Soviet Union purposely inflamed racial tensions by mailing forged threats from the KKK to black neighborhoods. – Source

19. The Ku Klux Klan and the Westboro Baptist Church have denounced one another. The KKK opposes the WBC anti-soldier statements, and the WBC opposes the KKK’s racism. – Source

20. The ACLU has filed a lawsuit defending the KKK’s right to participate in Georgia’s Adopt-A-Highway program. – Source

July 31, 2017
Latest Posts
Subscribe to Blog via Email
Did you know?
Loading...
Facts of the Day
Registration is disabled.