New York is one of the most beloved and visited cities in the world.

Countless historic moments have happened here, many famous people were born here, and several people visit the city each year to experience its magic.

We all know that New York is famous for things like Times Square, the Statue of Liberty, and the Empire State Building. However, even if you’re a born-and-raised New Yorker, there are still probably some fascinating facts about this city that you don’t know.

Read on to discover the top interesting New York facts you may not have known.

1. Its Nickname “The Big Apple” Originally Referred to Horse Racing 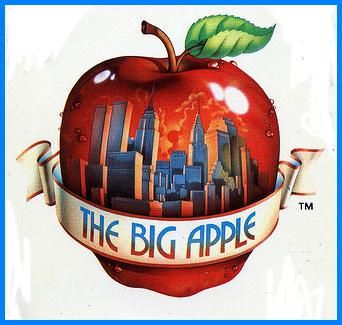 Almost everyone knows that the nickname for New York City is “The Big Apple.”

But, do you know why this is New York City’s nickname?

The city actually got its name from the New York Telegraph‘s horse racing column from the 1920s. In this paper, sports columnist John J. Fitz Gerald used the term “The Big Apple” to describe the money prize given at horse races around the city.

Before historians figured out this was the origin of the city’s nickname, a number of false theories existed about its origin. For example, it was widely believed that the term derived from a woman named Eve who lived in the city and ran a secret brothel.

After the term was coined by Gerald, it started to spread and be used in other contexts. For example, many jazz musicians started using the term in the 1920s and attributing it to New York City.

New York City’s official marketing and tourism campaign popularized the term in the 1970s. It was during this time that the city was suffering from a financial crisis, and the city wanted to remind its citizens about what made New York so great and powerful.

You can check out Attendee to learn about the best events celebrating the Big Apple.

2. There’s a Surprising History Behind the Iconic “I Love NY” Logo

When you visit New York City, you can’t walk very far without seeing someone wearing a t-shirt that says “I Love New York.”

While a local probably wouldn’t be caught dead in this type of t-shirt, tourists seem to love these shirts, and there are now all kinds of “I Love New York” memorabilia that one can buy.

Additionally, other cities around the world have adopted the famous structure, and you can now find a shirt in almost every big city that says “I Love….”

But, how did this famous t-shirt even come into being?

As we mentioned, New York was experiencing a failing economy in the 1970s. Many areas of the city hit rock bottom, and to make matters worse, President Gerald Ford denied the city federal aid to get it out of bankruptcy.

At the same time, the city was experiencing a financial crisis, it was also experiencing unprecedently high crime rates and drug usage. All these problems were giving the city a bad reputation that discouraged tourism.

So, to turn the image of the city around, New York City Deputy Commissioner Mark Donnelly hired an advertising agency named Wells Greene Rich to conduct a state-wide marketing campaign.

The city also hired Milton Glaser, a graphic designer, to create a logo for the campaign. Together, they came up with the iconic slogan “I Love New York,” as well as the iconic, bubbly design.

3. The Reason Most Taxi Cabs Are Yellow 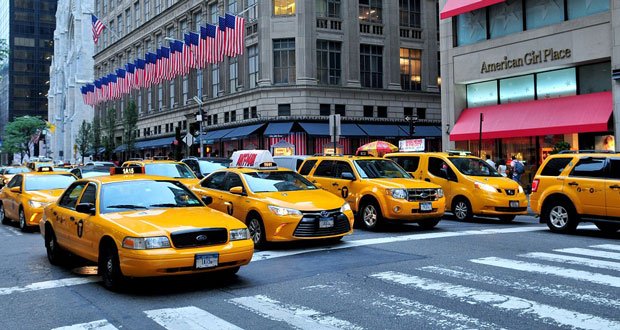 Even though Uber and other ride-sharing apps have essentially taken over, the iconic yellow taxi is still a major symbol of New York City.

The story of the yellow taxi cab dates back to 1907. In this year, Harry N. Allen started the New York Taxicab Company. This company brought the first gas-powered taxi cabs to New York City.

The company started with 600 cabs imported from France. And guess what? They weren’t yellow! They were actually red and green.

After this, other cab companies started to experiment with different colors to make their cabs stand out so pedestrians could easily flag them down.

After a few years of experimentation, two major cab companies in New York decided that yellow was the way to go. But, why was yellow the final choice?

According to a popular account, one of the owners of the cab company chose yellow to please his wife, who favored the color.

However, according to the Deputy Commissioner for Public Affairs at the NYC Taxi and Limousine Commission, the reason yellow was chosen was because a company conducted a study and found that yellow was the easiest color to see from a distance.

4. The Story of the New York City Bagel 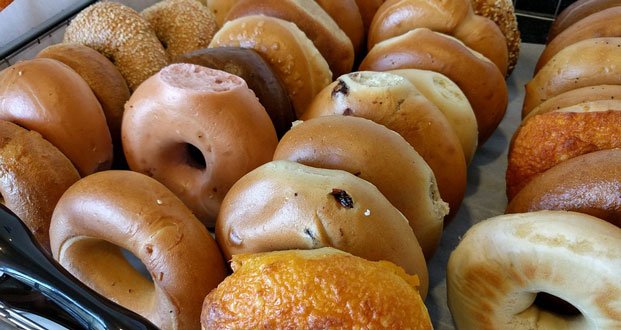 Although New York is arguably home to the world’s best bagel (and best pizza), almost all food historians agree that the bagel actually originates from Poland. An old tale claims that the first bagel was made to honor the 17th century King of Poland, John Sobieski, to celebrate his victory over the Ottoman Empire.

This tale, however, was later debunked.

The bagel is believed to have eventually made its way over to New York City during the late 1800s when there was a large immigration of Eastern European Jews.

Bagels were first produced in New York in small, privately owned bakeries. As Jews moved to other parts of the city and assimilated with other communities, their tasty bread innovation was shared with more and more people.

The consumption of bagels skyrocketed in the 1960s, due to mass distribution channels and packaging innovations. By the 1980s, the size of the bagel was nearly doubled, and the New York Bagel as we know it was born. 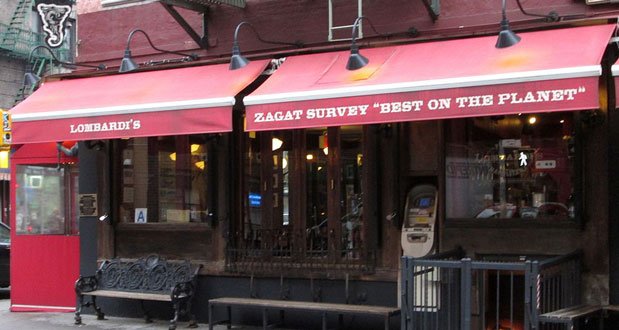 Pizza is arguably the food that is most often associated with New York City. If you don’t come to New York and grab a slice, you’re really missing out on something great.

While there are a lot of theories surrounding why New York City pizza is so good (many believe it’s due to the water, others think it’s the ovens), one thing we do know for sure is that the first American pizza joint originated in New York.

Italian immigrants brought this tasty cheesy snack to America, and it was in 1905 that the very first pizza joint was opened. The name of this pizza joint was Lombardi’s, and it still exists today!

Originally, Gennaro Lombardi started the business as a grocery store, and he began selling pizzas wrapped in brown paper and sold at lunchtime to workers from factories in the area.

In 1905, he received a license to operate the store as a pizzeria, and he began almost exclusively selling pizza. In 1984, Lombardi’s surrendered its title as America’s oldest continuously operating pizza joint, as the pizzeria changed locations.

The new location installed coal ovens so it could bake its pies using the original formula. One interesting thing to note is that Lombardi’s does not sell the slices that New York is famously known for. Instead, you can only buy whole pies from the pizza joint.

6. Everyone Used to Move Apartments on the Same Day 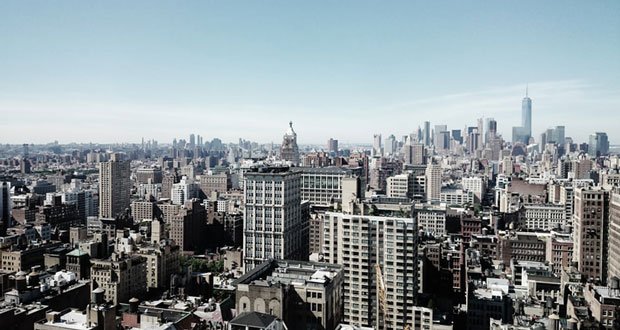 We can’t even imagine.

That’s right. For a very long time, moving day in New York City was designated as May 1st. And nearly everyone who needed to move apartments did so on that day.

As you can imagine, this caused huge traffic jams and chaos as the streets were clogged with horse-drawn carriages moving furniture from one place to the next.

Luckily, this practice started to die down in the 1920s, and now New Yorkers can move apartments whenever they please. Although, of course, it’s still a bit chaotic!

7. It Would Take You Approximately One Full Day to Navigate the Entire NYC Subway System 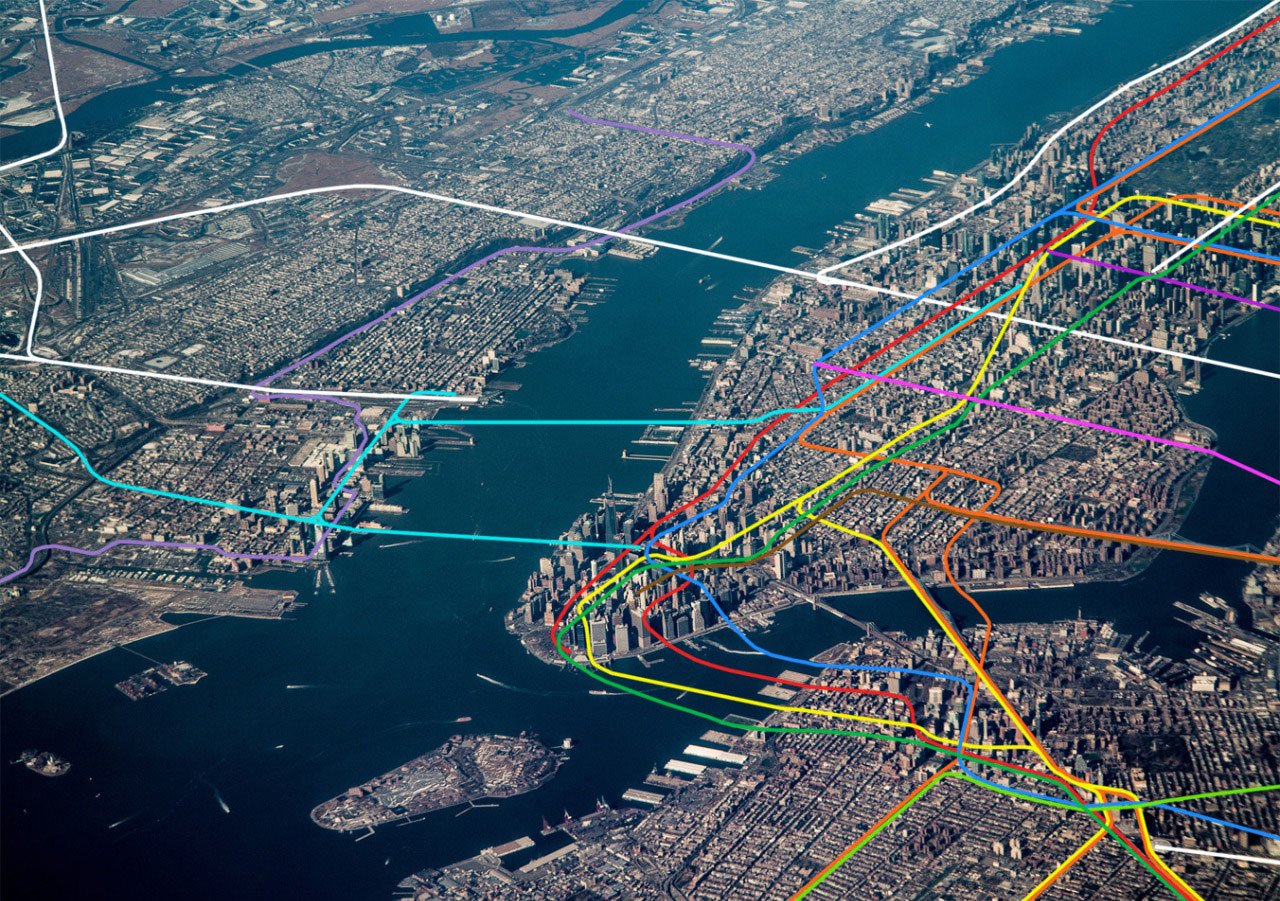 Although the NYC subway system may not be the cleanest one in the world, it definitely can get you wherever you need to go around the city for just a few bucks.

The subway system, which has 469 stops and 34 lines, is one of the largest mass urban transportation systems in the entire world.

If you were to travel to every stop without leaving the transit system, it would take you close to 24 hours!

Now that you know these interesting New York facts, you’ll see the city in a whole new light the next time you visit.

If you enjoyed reading these fun facts, be sure to peruse our blog for more fun facts about other cities and other places.