1. A thunderstorm named “Hector the Convector” has rained on a portion of Australia nearly every day since at least WWII. – Source

3. In 1955, a thunderstorm in Belgium set off 40 000 pounds of buried explosives left over from the WW1 battle of Messines. Luckily, the only casualty was a single cow. – Source

4. Around 39 years ago, a major thunderstorm led to a major blackout in New York City, allowing city residents to see the Milky Way Galaxy. – Source

5. Lt Col William Rankin is the only person to have parachuted through a thunderstorm cloud. He was kept there by the updraft for 40 minutes. – Source

6. One theory for explaining ball lighting is that it doesn’t exist at all, and is a hallucination caused by a thunderstorms electromagnetic field falsely firing neurons in the occipital lobe. – Source

7. During a thunderstorm, the reason you are safe in a car is not that of the rubber tires, but rather because of the Faraday Cage effect due to the metal frame of the car. In strong electric fields, rubber tires actually conduct more than they insulate. – Source

8. NASA flew an F-106B through 1,496 thunderstorms on purpose to improve aviation lightning protection standards. It was hit by lightning 714 times. – Source

9. The Earth has about 760 thunderstorms every hour. – Source

10. As a result of human-induced earth-surface change Atlanta, GA has its own weather, with thunderstorms triggered by the heating over the city. – Source 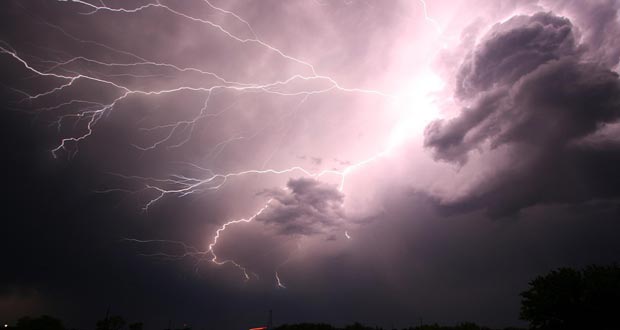 11. A typical thunderstorm releases an amount of energy greater than that of the atomic bomb blast at Hiroshima (1945), simply by condensing the water that becomes rain. –Source

12. Thunderstorms on the west coast are pretty rare. – Source

14. The “Storm that saved Washington” was a heavy thunderstorm that occurred less than a day after British troops set fire to several public buildings in the capital, the storm extinguished all the fires and drove the British troops away while badly damaging their ships. – Source

16. Heat lightning is sometimes called silent lightning due to the fact that it originates from a thunderstorm so far away that the thunder is not heard. Usually appearing in summer, people called it heat lightning despite not having to have anything to do with heat. – Source

17. Hank Brandli and Air Force meteorologist learned, through spy satellite imagery, that the splashdown site of Apollo XI would be full of lethal thunderstorms. He managed to alert NASA despite the highly classified nature of the information. – Source

18. Thundersnow is an unusual kind of thunderstorm with snow falling as the primary precipitation instead of rain. – Source

19. A haboob is different than a sandstorm because it’s caused by strong thunderstorm winds and can lift dust as high as 5,000 feet. – Source

20. An extreme temperature of 87 °C (189 °F) was recorded during a heat burst in Abadan, Iran. A rare atmospheric phenomenon that occurs near the end of a weakening thunderstorm cluster, characterized by a rapid increase in temperature. – Source

21. Lightning can occur during a volcanic eruption, creating a “Dirty Thunderstorm”. – Source

22. During the early days of photography, lengthy exposure times could be reduced if images were captured during a thunderstorm. Humidity and atmospheric electricity combined made the unexposed plates, what photographers of the era called “fast”. – Source

23. It is Unwise to shower during a thunderstorm because lightning can travel through your plumbing. – Source

24. Derechos, fast-moving thunderstorms that can cause hurricane force winds, tornadoes, heavy rains, and flash floods. Up until Hurricane Katrina, the death toll from Derechos and hurricanes in the US was similar. – Source

25. A supercell is a thunderstorm that is characterized by the presence of a mesocyclone: a deep, persistently rotating updraft. – Source

26. Ben Franklin was not the first person to conduct the kite-in-the-thunderstorm electricity experiment. – Source