This is a list of the most powerful beings in DC universe. Counting down from 15 to 1, I will also mention their powers to get you an idea how powerful they are. There are a lot of others, but I couldn’t make a bigger list. But they are definitely worth mentioning like Superman Prime,Entity, Phantom stranger, Rao etc. 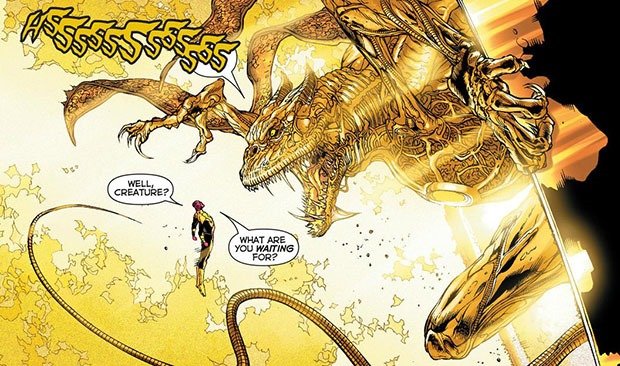 An ancient horror, Parallax, one of the seven emotional entities, is comprised of pure fear that can possess other beings. It is known to ravage planets and strike terror into the hearts of even the Guardians of the Universe.

Powers: The host of parallax gets a tremendous amount of energy and power by just feeding off fear.

Mind Control: Can install fear in others to be able to control them.

14. Lords and Agents of Chaos 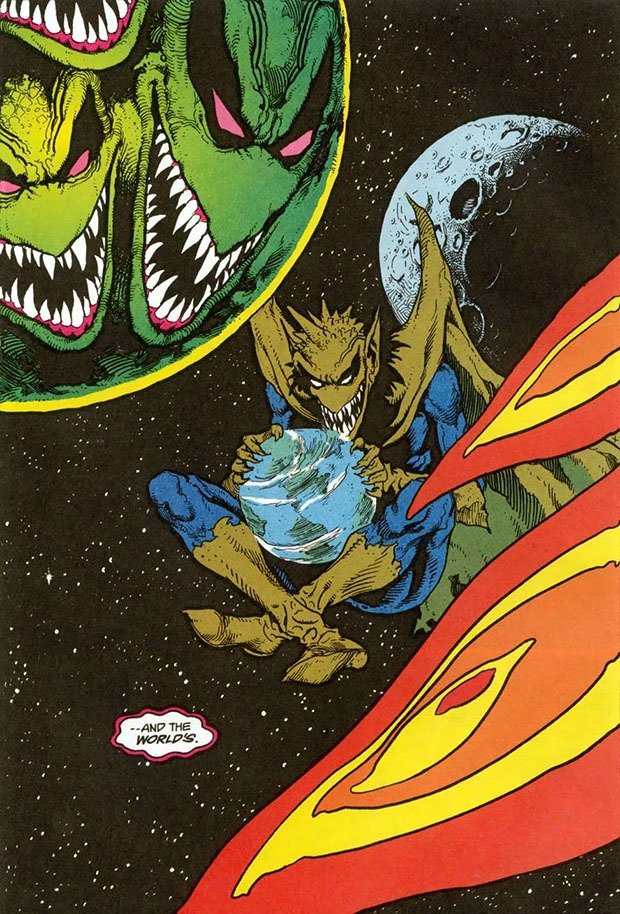 Elders and Gods who create chaos in the Universe and their agents.

Lords of Chaos that have been destroyed during the 9th Age of Magic:

13. Lords and Agents of Order 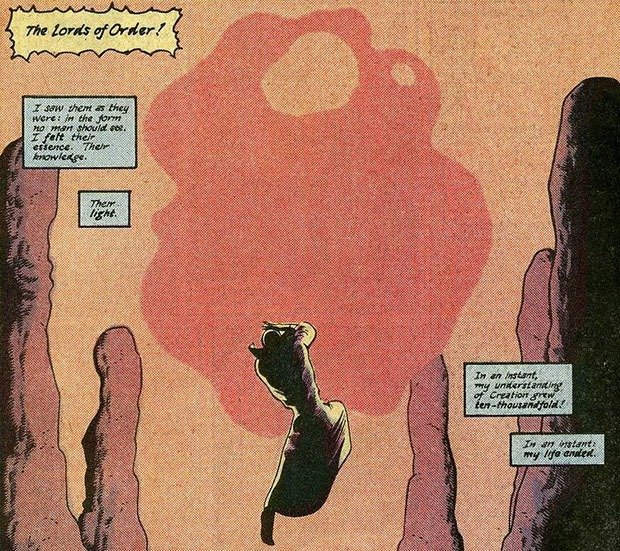 Elders and Gods who maintain order in the Universe and their earthly agents.

The Lords of Order often create or acquire human agents so that they may act on their behalf to maintain order.

The Lords of Order are believed to have died during the 9th Age of Magic: 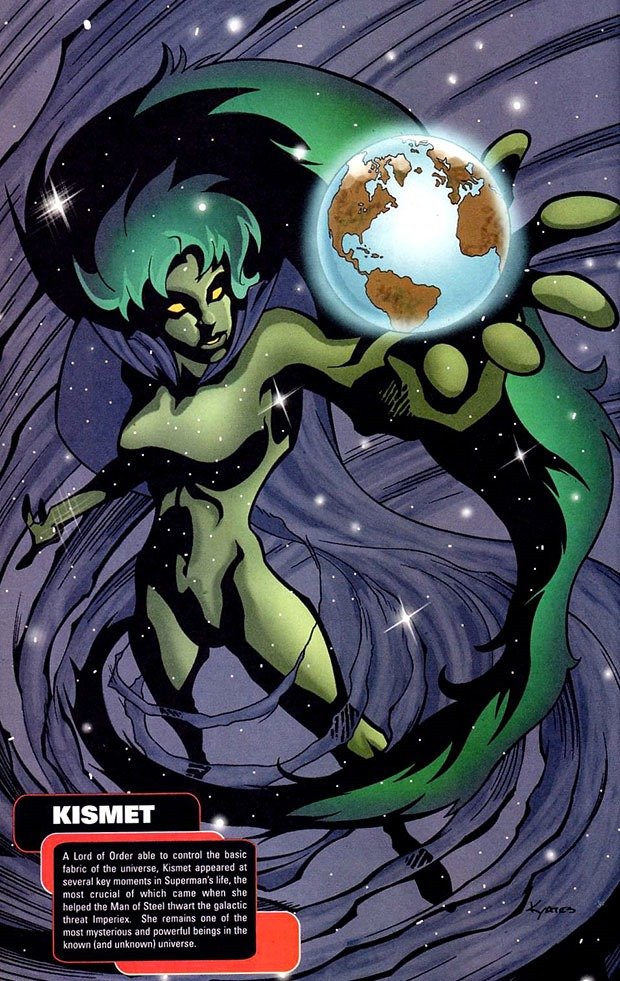 Kismet is an immortal god in the DC universe. She first appeared in The Adventures of Superman 494 and guided the Man of Steel in his path of righteousness. She has had little appearances since then.

Power: Kismet is a cosmic entity that possessed vast cosmic power for her to use in virtually any situations. She is considered the DC Universe’s equivalent of the Marvel character Eternity, the supreme embodiment of time in the Marvel Universe. She is nigh-omnipotent and can manipulate time, space and reality to achieve virtually any feat imaginable. She is also immortal meaning she doesn’t suffer from the passages of time. 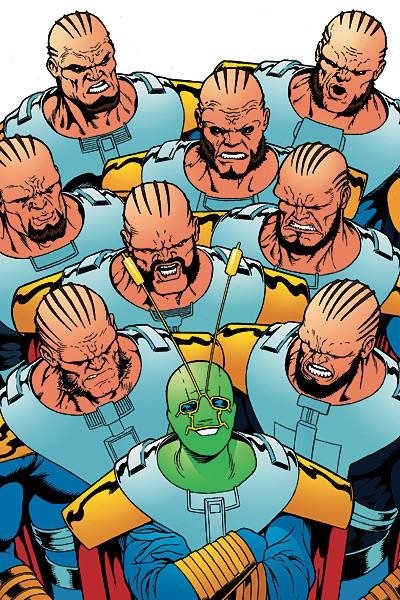 They “monitor” the multiverse and are determined to wipe out all anomalies that threaten to destroy the fabric of the mulitverse. During the first multiverse, there were only two, the Monitor and the Anti-Monitor, who oversaw the multiverse and the anti-matter universe respectively. Both were killed during the events of Crisis on Infinite Earths. 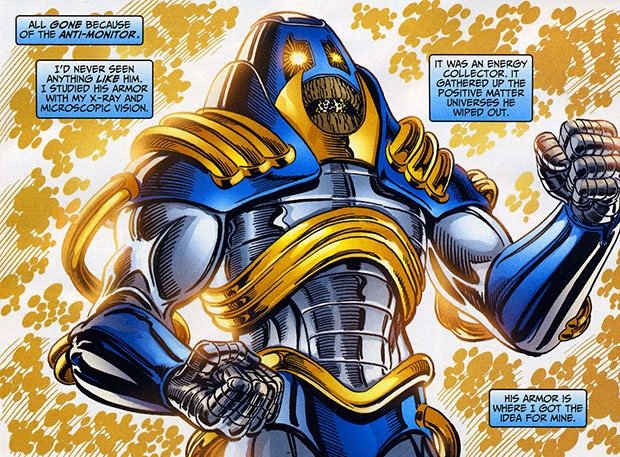 The Anti-Monitor is The Monitor’s counterpart from The Anti-matter Universe. He is responsible for the original Crisis on Infinite Earths, was the sole Guardian of The Sinestro Corps and once, against his will, was the source of The Black Lantern Corps Central Power Battery.

Powers: The Anti-Monitor is one of the most formidable beings in the DC universe, having caused more deaths than any other villain the DC universe has encountered. He has destroyed and absorbed thousands of positive matter universes. The Anti-Monitor has immense strength and durability. He was able to shrug off blows from Superman and stalemate the Spectre. He was able to defeat hordes of superheroes. He is able to alter reality, fire bolts of energy, time travel, and by absorbing universes became more powerful than his counterpart, the Monitor. He can create shadow versions of himself and also absorb these shadow demons to recharge himself. At certain points, he has wielded both a Sinestro Corps Ring and a Black Lantern Ring. 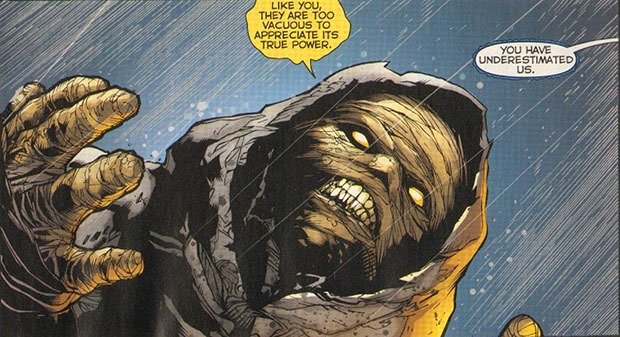 As a Maltusian, Krona is virtually immortal and invulnerable; he possesses vast psionic powers. He is obsessed with finding the origin of the universe itself and how it came into existence. Recently, he has been revealed to be the main antagonist of the “Brightest Day” story arc.

Powers: Krona possesses a supreme genius-level intellect, but his arrogance, lack of patience, short temper and above all insatiable hunger for knowledge have gotten the better of him. If it brought him any benefit, he would be the sort to attempt to quantify dance or measure a soul, solely for the sake of knowing. It is this madness that got Krona exiled and brought about his constant defeats. He has unhesitatingly destroyed universes and risked his own existence for a chance to gain deeper insight.

Like the rest of his species, Krona possesses enhanced physical abilities, vast psionic powers (including telepathy and telekinesis) and virtual immortality (he does not need to breathe, eat or sleep, and can regenerate from any injury at an accelerated rate). His powers were later increased by Nekron, making him more powerful than any of the Guardians.

As Entropy, Krona was composed of anti-energy, could absorb others into his body, converting them into more anti-energy, and was able to create an army composed of anti-energy that were completely under his control. During the JLA/Avengers miniseries, where he wielded the power of all the universes he had previously destroyed, Krona proved able to easily defeat both the Grandmaster and Galactus, although the Grandmaster’s power was sufficient to make him initially hesitant at the prospect of fighting the other being until his attempt to beat the Grandmaster in a game to gain the information he sought failed.

Also, as the caretaker of the Emotional entities which are the pure embodiments of the emotions comprising the Emotional Spectrum, Krona wields the powers of the entire emotional spectrum. 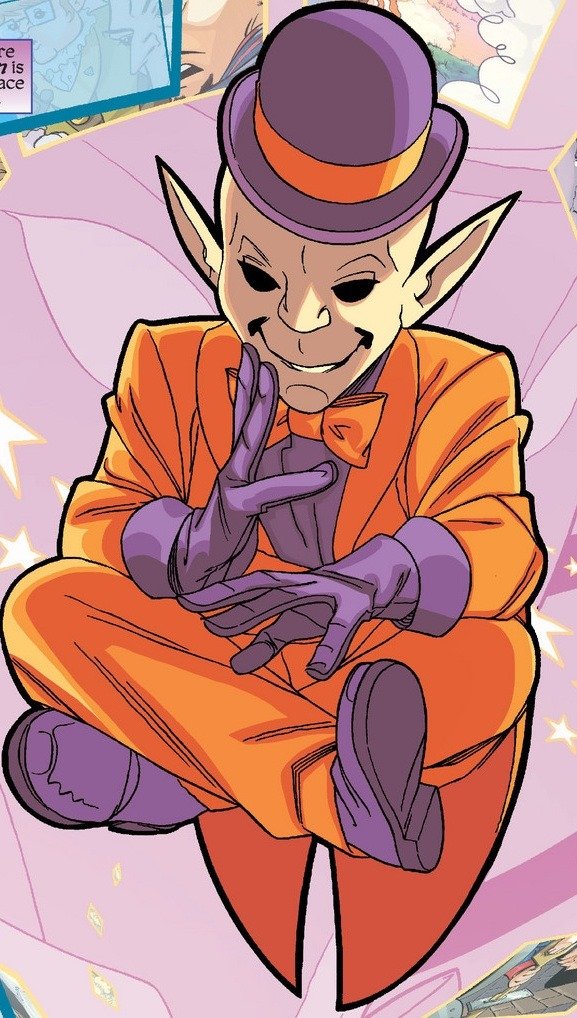 Mr. Mxyzptlk is a fifth-dimensional imp with the power to do almost anything he can imagine. He could transform Superman into ashes or erase him from existence, but where’s the fun in that?

Powers: Though most often portrayed merely as an annoyance, the true powers of Mr. Mxyzptlk are some of the greatest there is. As a 5th dimensional imp, like the Bat-Mite and the Thunderbolt, he is capable of virtually anything he wants to do, having once created and destroyed a fully functioning dimension just for a game he played, summoned Darkseid and survived it. He is also powerful enough to utilize the seemingly all powerful, toon force, in certain occasions and his kind is also immune to time manipulation as Hourman One Million was unable to unmake the calamity caused by Lkz (A djinn from 5th dimension). Despite being a prankster, rather than a malevolent entity who either seeks to dominate or annihilate all reality, he is capable of destroying multiverse and all space and time as it was stated by The Spectre and himself when the infamous event known as Emperor Joker took place. 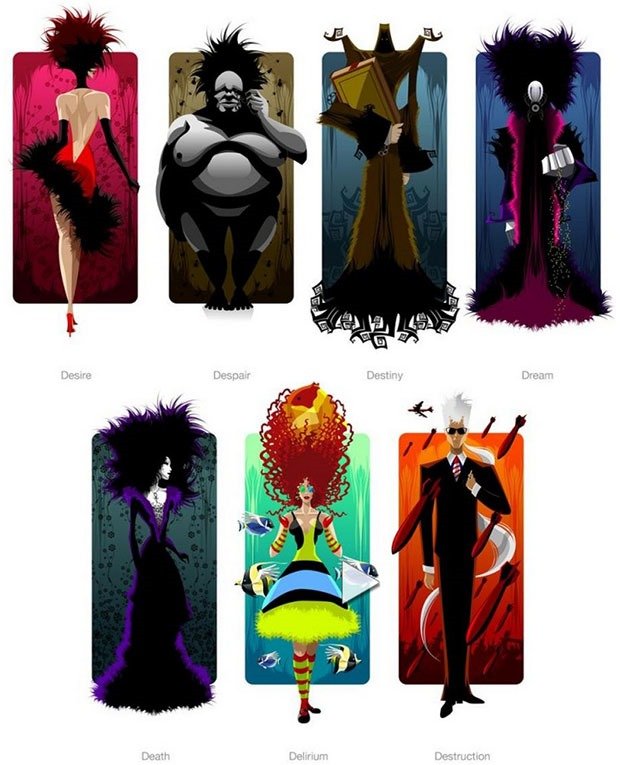 The Endless are seven siblings that embody seven different fundamental forces of existence itself. Ageless, immortal and nigh-omnipotent, these siblings were the central characters of the landmark Vertigo series “The Sandman.”

Powers: As they are the embodiment of the fundamental forces of existence you can imagine their power. 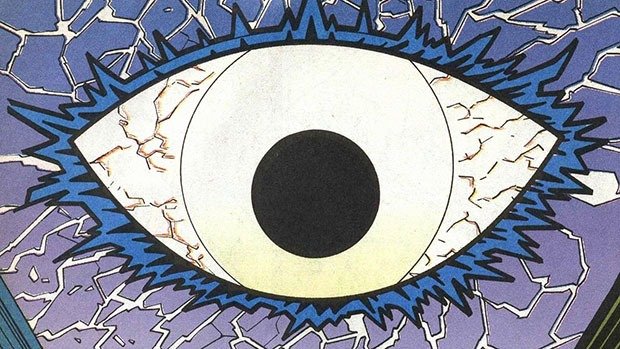 Evil entity summoned by the Cult of the Unwritten Book to unmake the world.

The Cult of the Unwritten Book believes that when God created the Earth he said ‘Let there be Light!’ and those words cast a shadow which became the Decreator – an entity of pure annihilation unable to be reasoned or even stopped. Members of Doom Patrol succeeded in slowing him down to such point that no one would notice the slow disappearance of the universe by using similar vibration equal to his power.

Powers: As the “Shadow of God,” the Decreator has no personality, no moral and holds no ties to good or evil, simply decreating things not out of hate or pleasure, but because it’s in its nature.