1. Toronto has an underground arcology, a network of underground tunnels where it possible to live without needing to venture outside. – Source

2. Using data from Toronto, researchers found having more trees on your block has health benefits akin to $10,000 raise or being seven years younger. – Source

3. A newspaper reporter in Toronto gave homeless people prepaid gift cards in $50 and $75 denominations. He then tracked them online, to see what they spent it on. – Source

4. In 1936, 30 Toronto men were arrested for removing the tops from their bathing suits and showing their nipples. – Source

5. The Great Stork Derby was a contest held in Toronto from 1926-1936, in which women competed to produce the most babies in order to win $750K as stipulated in the will of a wealthy lawyer. The prize ended up being split among four women who each had 9 babies. – Source

6. The reason the Toronto Maple Leafs are not called the Maple “Leaves” is that the name was chosen in honor of the Maple Leaf Regiment from WWI. As the regiment is a proper noun, its plural is Maple Leafs (not Maple Leaves). – Source

7. Until 2005, Toronto had a St. James-Bond Church, formed by the 1928 merger of the Bond Street Congregational Church and the St. James Square Presbyterian Church. – Source

8. Skyscrapers in downtown Toronto are air-conditioned via frigid water pumped from the bottom of Lake Ontario, reducing electricity costs by 75%. – Source

10. There’s a restaurant in Toronto, Canada staffed entirely by folks who are deaf. Guests are required to order in ASL. The waitstaff provides ASL cheat sheets and assists the guests in order. – Source 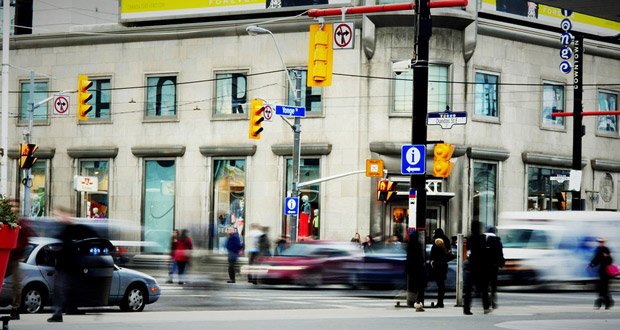 12. In Toronto, 1933, an amateur baseball game broke out into a massive race riot when a group of Nazi sympathizers, protesting the Jewish players, unveiled a crude Swastika flag. “A crowd of more than 10,000 citizens, excited by cries of ‘Heil Hitler’ became suddenly a disorderly mob.” – Source

13. There was a Toronto Circus Riot in 1855, in which firefighters and clowns brawled in a brothel on Front Street. – Source

14. The Toronto Public Library is the busiest urban public library system in the world. – Source

15. There’s a paper by the University of Toronto that outlines the usage and historical context of “eh”. – Source

16. Toronto subway token fare prices have risen faster than inflation since 1990. While the consumer price index has risen at an annualized rate of 1.8% in Canada, TTC fares have increased by 4.5%. An investment in tokens would have been more profitable than to deposit money in a savings account. – Source

17. There is a World Rock Paper Scissors Society that started in London, England and moved to Toronto, Canada in 1918 because Canadians are nicer. – Source

18. There is a park in Toronto, Canada that has thousands of bodies of Cholera victims from the 1800s buried underneath it. – Source

19. Toronto’s Pearson International Airport uses trained birds of prey to scare away, kill, or eat other birds in order to reduce the risk of bird strikes. Among these are falcons, hawks, and a bald eagle named Ivan. – Source

20. The Monkey’s Paw in Toronto has the world’s first “Biblio-Mat”, a vending machine that will dispense a randomly selected vintage volume for $2. – Source

21. The tradition of lighting lighters in the air at concerts started in Toronto as a way to ease ex-Beatles John Lennon’s stage fright. – Source

22. There is a hospital in Toronto that is fully digitized, that include robots that deliver food, medication, laundry, uniforms, dirty dishes throughout the hospital. – Source

24. When Toronto installed safer crosswalk signals with a countdown timer the rate of traffic accidents involving pedestrians decreased, while the rate of car accidents increased at those intersections. – Source

25. Because of its system of ravines, Toronto has been described as “San Francisco turned upside down”. – Source