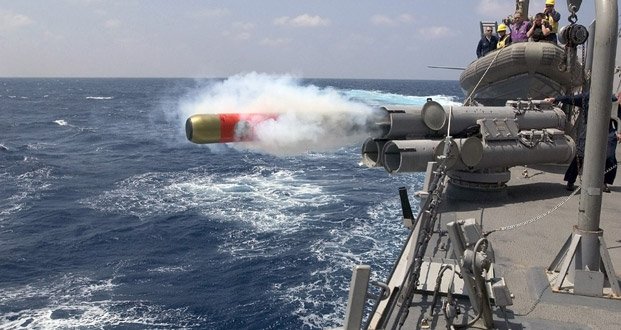 1. Not all torpedoes are designed to pierce hulls then explode, some detonate below the target ship without making contact. This creates a gas bubble that causes the ship to be thrust out of the water then dropped back into the resulting void, often breaking the vessel in half and sinking it. – Source

2. Winston Churchill, along with many of the Royal Navy’s highest-ranking men, came very close to death after the ship they were on was fired at by a U-boat with 3 torpedoes. All three struck the hull of the ship, but all failed to explode. – Source

3. Coffin Torpedoes were invented in the 1800s to prevent grave robberies. They fired if the coffin was opened. – Source

4. A Russian named Vasili Arkhipov avoided causing WWIII after refusing his captain’s orders to launch nuclear torpedoes at US warships during the height of the Cuban Missile Crisis. 2 of the 3 officers on board wanted to fire the missile, however, a unanimous decision was required. – Source

5. 1930’s starlet Hedy Lamarr invented a new technology to stop Nazi’s from jamming Navy torpedoes, but the idea was rejected until 1962 and implemented during the Cold War. Her frequency hopping technology is also the basis for modern Bluetooth. – Source

6. During WWII, Japan developed manned suicide torpedoes named Kaiten. Early designs allowed the pilot to escape before hitting the target, but nobody seemed to use the feature. This ability was later traded for a locked hatch and a self-destruct control. – Source

7. WWI ships were painted with flashy Razzle Dazzle designs to make it more difficult to hit them with torpedoes. – Source

8. The Confederate States of America created explosives disguised as pieces of coal. Saboteurs mixed the coal torpedoes with regular coal and when workers shoveled them into the steam engines they detonated, damaging or destroying the ship. – Source

9. The Company that built the Torpedoes used by the Japanese to attack Pearl Harbor was destroyed when the atomic bomb was dropped on Nagasaki. – Source

10. From 1941 to September 1943 American subs were plagued with faulty torpedoes that had a failure rate near 70%. Sub captains started relying on their deck guns instead until the problems were corrected. – Source

11. During the first two years of WWII, the majority of the torpedoes fired ran too deep, exploded too early, did not explode on contact or even circled back to sink the submarine. – Source

13. The biggest maritime disaster is believed to be the sinking of MV Wilhelm Gustloff in 1945. An estimated 9,400 out of 10,500 of the passengers perished after the ship was hit by three Soviet torpedoes, six times more than the famous Titanic disaster. – Source

14. The torpedoes which sank the Belgrano in 1982 were of a design first deployed more than a decade before World War II. – Source

AskReaders: What is unethical, but is extremely common practice in the business world?

December 7, 2017
Latest Posts
Subscribe to Blog via Email
Did you know?
Loading...
Facts of the Day
Registration is disabled.