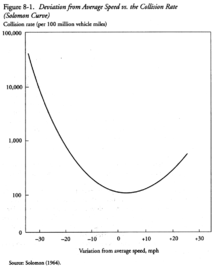 26. According to “Solomon Curve”(also called the “Crash Risk Curve”) drivers traveling 5 mph (8 km/h) above the average speed of traffic are statistically the least likely to be involved in a crash while crash risk increases dramatically when traveling below the average speed. – Source

27. There is an upside-down traffic signal in Syracuse, New York because the Local Irish kids didn’t want British red above Irish green. – Source

28. Red and yellow cards in FIFA were introduced after a referee was stopped at a traffic light and thought “Yellow, take it easy; red: stop, you’re off”. They also helped to address the communication issues due to the various languages involved. – Source

30. The word “Jay” used to mean stupid and was eventually applied to country folk, who were seen as unworldly. When these country folk, or Jays, came to the city, they didn’t understand traffic signals and crosswalks and crossed wherever and whenever they could. Thus, they were “jaywalking.” – Source

31. A British Radio sports commentator’s on-air innuendo was so funny, it caused a 2-mile long traffic jam because drivers who were listening couldn’t stop laughing. – Source

32. In Germany, Father’s Day is celebrated by groups of males going hiking with one or more smaller wagons filled with wine or beer and traditional regional food. Many use this day to get drunk, and alcohol-related traffic accidents multiply by three on this day. – Source

33. In 1968 Olympics, Kip “Kieno” was late for the 1500m final, because he was stuck in traffic. He ran 2 miles to make it to the event on time, and still won the gold. He was also suffering from Gallstones. – Source

34. Car companies like Jaguar, Cadillac, and Dodge discontinued hood ornaments in part because they would kill pedestrians in otherwise minor traffic incidents. – Source

35. The adoption of the E-ZPass, a highway toll transponder, in the northeast United States resulted in an interesting health benefit, about a 10% drop in preterm infant birth and low birth weight in areas near tollbooths, due to lower traffic congestion. – Source

36. Traffic is so bad in Bangkok that Thai Traffic Police has a unit of officers trained in basic midwifery in order to assist deliveries which do not reach the hospital in time. – Source

37. Because of Daylight Savings Time and the loss of an hour of sleep, the Monday after clocks “Spring Forward” sees an increase in fatal traffic accidents. – Source

38. In, 2002 a man went to court for a £25 traffic ticket and demanded to settle with Trial By Combat. He challenges any champion nominated by the Driver and Vehicle Licensing Agency to a battle with samurai swords, knives, or hammers. – Source

39. Dmitri Krioukov, a physicist from San Diego, avoided a traffic fine by publishing a paper called The Proof of Innocence, for which he was also awarded a special prize of $400. – Source

40. On the day of the High School final exam in Korea, government workers can arrive one hour late to reduce traffic congestion, motorists can’t honk their horns near exam venues, and flight schedules are altered. Police, taxis, and motorcyclists offer free rides to students who need them. – Source