2. Bubbles rarely keep his head straight because actor Mike Smith could not see well when he wears the glasses.

3. Donny, the loudmouth trailer park resident who is never seen is voiced by Mike Smith, who plays Bubbles.

4. A tradition in the series is that Ricky will wear the same shirt for the entire season.

5. Although the show is scripted, Rob Wells (Ricky) said many of the memorable moments on the show were ad-libbed by the cast.

7. A running theme of the show is the boys being in jail at the beginning of a season, then spending the rest of the episodes committing crimes and evading police, only to end up back in jail in the season finale.

8. In the episode “Friends with the Benedicts” the song “A Question of Faith” by Sandbox plays in the background in the scene in Ricky’s ice rink trailer. Mike Smith (Bubbles) played guitar for the same band in the 90s.

9. The character of Jim Lahey (portrayed by John Dunsworth), is shown to be a severe alcoholic in nearly every episode of the show. In reality, John Dunsworth does not drink, and the “liquor” that Jim Lahey drinks during the show is cola mixed with water.

10. One of the more popular running jokes is Ricky’s use of eggcorns and portmanteaus. Frequently messing up common phrases I.e. “getting two birds stoned at once”, or incorrectly pronouncing large words i.e. “psychobiological”. They are commonly known as “Rickyisms”.

11. Ricky’s car (infamously known as the “Shitmobile”) has only been referred to by its name 8 times. Twice by Lahey, once by Bubbles and once by a female police officer in the episode “Where in the F*ck Is Randy’s Barbeque.” Also by Tom Arnold 4 times in season 10.

12. Julian is perpetually seen carrying a glass of rum and coke with ice clinking around in it. Even in situations where the drink should have spilled he seems to always recover it. This is most noticeable in Season 2, episode 7 where the boys flip a vehicle and a trailer hauling weed. When Julian climbs out of the crashed car his drink appears to have not spilled a single drop.

13. The song that is always playing in Cyrus’ car is “I’m Old (you’re young)” by Rick Jeffery.

14. Bubbles’ and Ricky’s p*rno costumes are Ricky and Jason’s mall security uniforms from “The Cart Boy”.

15. In the episode “Closer To The Heart!” (Season 3, Episode 5), The concert scenes were actually filmed in Toronto at the Air Canada Centre, not at the Halifax Metro Centre. 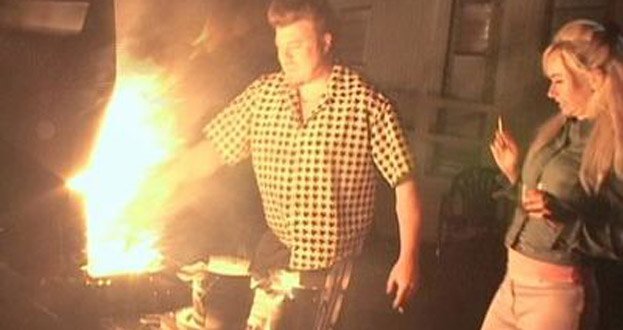 16. In the episode “f**kin’ Way She Goes” Ray explains that the trailer he purchased with Tammy had just been paid off after a 35-year mortgage. A trailer of that size in the year 1970 cost around 4500 dollars at a high estimate. On a 35-year mortgage the payment per month would have been roughly 11 dollars.

17. Bernard Robichaud, the actor who plays Cyrus, is considered one of the nicest actors on the show. Many of the producers and other actors consider him a pleasure to work with.

18. Phil “Philadelphia” Collins appears in the first episode as a background extra in the crowd that forms from Julian telling Cyrus to get out of Sunnyvale.

19. Throughout the show, the boys are frequently heard talking about getting “donairs”. Donairs are a popular food in Nova Scotia, similar to Shawarma or Gyros.

20. Several celebrities have made cameos on the show. Including Rush guitarist, Alex Lifeson, Nova Scotia native singer Rita McNeal, Tragically Hip frontman Gord Downie, and many others. In most cases, the actors were big fans of the show and asked Clattenburg to be given roles. Alex Lifeson is a huge fan, and appeared in the season 3 episode Closer to the Heart, as well as the both the first Trailer Park Boys Movie, and Countdown to Liquor Day as a cross-dressing undercover police officer.

21. After season 10 aired, during filming for season 11, Jonathan Torrens (J-roc) announced he would be permanently leaving the Trailer Park Boys. He said that he wishes to pursue other artistic projects but thanked the loyal fans of the show for its past and continued success. In season 11, T says that J-roc and MCFlurry went on a cross-country rap tour.

22. In season 8 Cyrus’s car horn is the opening solo in Stravinsky’s ballet The Rite of Spring, and later on, in the season it’s Eric Clapton’s song Cocaine.

23. During the entire run of the show, the boys are seen drinking out of containers that are never actual cups, other than Julian. They drink from cups made out of old 2L bottles, coffee pots, dog food bowls, and dish soap bottles to name a few.

24. As a testament to the boys’ character, it is common during times when Julian and Ricky are being arrested, that they encourage Bubbles to flee or hide such that he won’t have to go to jail.

25. In season 11, we finally meet Donny, the loudmouth of the trailer park usually heard during intense moments on the show. He is shown as an older man in a white undershirt with white underwear completely unconscious, but his face is blurred out. Donny is still voiced by Mike Smith. His trademark line is “what in the f*ck!”

AskReaders: What are some cool websites where you can download free stuff?