1. Glass fiber can be produced from a volcano. Pele’s hair, named after the Hawaiian goddess of volcanoes, is a glass fiber formed through the stretching of molten basaltic glass from lava. – Source

2. The asteroid that killed the dinosaurs also caused volcanoes to erupt everywhere, acid rain which burned flesh and vegetation, a sulfuric gas that blocked out sunlight for years, vaporized rocks as deep as the sea floor, and mega tsunamis up to 2 miles (3.22km) high. – Source

3. The largest volcano on Earth is named Tamu Massif. Located at the bottom of the Pacific ocean it has a surface area the same as New Mexico making it one of the largest volcanoes in the Solar System. – Source

4. Eight new islands have formed across our planet since 2010 due to underwater volcanoes eruptions and glacial retreats. Populations of many wild animals, including insects, birds, rats, and even monitor lizards have now settled on them. – Source

5. People work surrounded by sulfuric clouds of gas inside the caldera of an active volcano for as little as $11 a day mining sulfur at great risk to their respiratory health & Safety for the purpose of bleaching sugar white. – Source 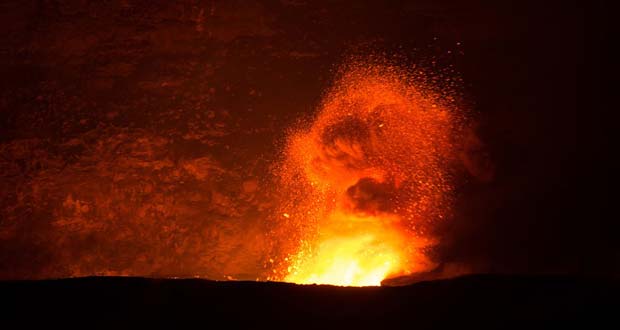 7. Laki is one of the deadliest volcanoes in the world. It erupted in 1783 which caused famine and killed 25% of Iceland’s population, it also caused a drop in global temperature which resulted in crop failures in Europe and droughts in India. It estimated to kill over 6 million people globally. – Source

8. One of Hawaii’s five active volcanoes, Kilauea, has been continuously spewing lava since 1983. It is the longest-lived volcanic eruption anywhere on Earth. – Source

9. The Kawah Ijen volcano in Indonesia has so much sulfur its flames burn blue. – Source

10. Volcanoes can produce lightning all on their own. – Source

11. There are ice volcanoes on other planets and moons like Titan that, instead of lava, erupts deadly hydrogen cyanide – a product of methane and ammonia plumes. – Source

12. Kingdom of Saudi Arabia has volcanoes. “The last well-documented eruption in Saudi Arabia occurred in the northern end of Harrat Rahat near Al-Madinah in 1256 AD / 654 AH, continued for 52 days, and the lava flows reached to within 12 km [7.4565 miles] of the city before activity ceased.” – Source

13. Volcanoes can be harnessed as an energy source. – Source

14. There are over 50 volcanoes in Auckland, New Zealand. – Source

16. Continuously erupting volcanoes are referred to as Strombolian eruptions. Mount Stromboli itself has been erupting continuously for over two thousand years. – Source

17. Over the past 500 years, Iceland’s volcanoes have erupted a third of the total global lava output. – Source

18. The Sahara Desert used to have active volcanoes. – Source

19. In order for magma to form, water must be added in order to decrease the melting point of the rock, thus many volcanoes being along plate faults. – Source

20. There are volcanoes that erupt black/silver lava. – Source

21. There are multiple active volcanoes in Antarctica. – Source

23. The Izu Islands in Japan require its inhabitants to carry gas masks at all times due to the poisonous gasses released from volcanoes there. – Source

24. Western Australia does not have any volcanoes due to the fact that it is situated directly on top of a tectonic plate. – Source