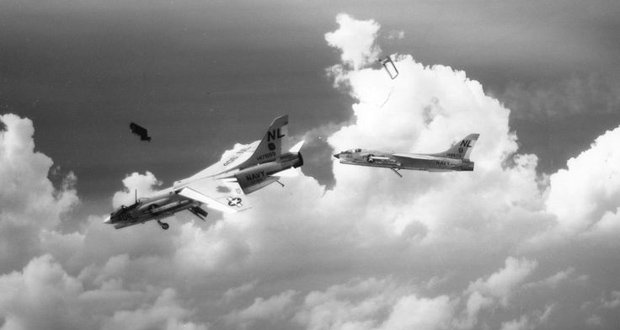 1. It is a war crime to attack a parachuter bailing from a distressed aircraft. – Source

2. In 1937 during the Battle of Nanking, two Japanese officers were executed on war crimes charges, for holding a contest that who will be the first to kill 100 people with a sword. – Source

3. A Nazi commando, Otto Skorzeny during WWII was tried for war crimes for having worn allied uniforms to conduct missions behind the lines. He was acquitted after British commandos testified that they did the similar activities during the war and convicting him would have meant an indictment against them. – Source

4. Adolf Eichmann, aka “the architect of the Holocaust”, couldn’t afford the attorney he wanted when he was on trial for his crimes. The Israeli government without wanting any reason to question the legitimacy of the trial, paid for Eichmann to be represented by the lawyer of his choosing. – Source

5. Under the Geneva Convention, it’s a war crime to change another country’s weather. – Source

6. It is a war crime if you knowingly fire at a medic wearing clear insignia, under the Geneva Convention. – Source

7. Rommel’s Afrikakorps was involved in plots to assassinate Hitler, he protested against the treatment of Jews, refused to execute commandos and repeatedly defied Hitler, and still was never accused of war crimes. – Source

8. An International war crimes tribunal was organized by British philosopher Bertrand Russell in 1967, in which complete accord concluded the U.S Government guilty of genocide against the people of Vietnam. – Source

9. One of Hitler’s top officers, Hermann Göring was asked to be shot as a soldier and not hung as a common man, during the sentencing of his war crimes trial. As the court refused, he committed suicide with a potassium cyanide capsule smuggled into a fountain pen. – Source

10. During their war crimes trial, an IQ test was given to Nazi leaders and were all considered “intelligent enough to have known better.” – Source

11. Between 3,000 and 12,000 men, women and children died at Unit 731, a facility kept by the Imperial Japanese Army dedicated to human experimentation. It was responsible for most notorious war crimes committed by Japan. – Source

12. General Butt Naked would drink the blood or eat the heart of a small child he’d hunted down before going into battle naked except for sneakers and a machine gun, was responsible for 20,000 civilian deaths, and after converting to Christianity has yet to be prosecuted for war crimes. – Source


13. In 2001, a UFO religion called Raëlism suggested that Hitler should be cloned and tried for war crimes. – Source

14. The most skilled interrogator in Nazi Germany, Hanns-Joachim Schraff, was a sensible, humane man who was never tried for war crimes afterward, but instead was invited to speak to the US military about his techniques. – Source

15. Not only does the USA not adhere to the International Court of Justice, but even have a law stipulating the invasion of the Hague should an American be on trial for war crimes. – Source

16. Oskar Dirlewanger was a commander of the “Dirlewanger” unit, the most infamous SS unit in the German military during WWII. A child molester, violent alcoholic, and sadist, the war crimes committed under Dirlewanger’s command remain unparalleled in their monstrosity. – Source

17. A man entered Auschwitz voluntarily so that he could document war crimes in the camp. – Source

18. On December 7, 1963, 22 years after Pearl Harbor, a Japanese court ruled that the atomic bombings of Hiroshima and Nagasaki were, in fact, war crimes, but that Japan had waived its right to pursue the matter under the terms of the Treaty of San Francisco. – Source

19. Until the end of World War II, there was no international law preventing the bombing of civilians around “defended” targets. That’s why the atomic bombings are not considered war crimes. – Source

20. The United States covered up certain Nazi scientist’s war crimes records during the Nuremberg Trials to get their minds to work on the various space projects. One such convict was Arthur Rudolf, the man who designed the Saturn-V rocket that went to the moon. – Source

22. Japan was has been apologizing since 1957 for war crimes during WWII, with the most recent apology being in 2012. – Source

23. A great deal of Nazi SS members had their blood type tattooed on their arm in the case of a need for emergency blood transfusions; however, post-war, these were used as prima facie evidence for the immediate war-crimes prosecution, and in some cases, execution. – Source